To read in analog inputs, the Blynk Board uses a special-purpose pin called an analog-to-digital converter (ADC). An ADC measure the voltage at a set pin and turns that into a digital value. The ADC on the Blynk Board produces a value between 0 and 1023 -- 0 being 0V/LOW/OFF, 1023 being 3.3V/HIGH/ON, and 512 being somewhere in the middle ~1.65V. 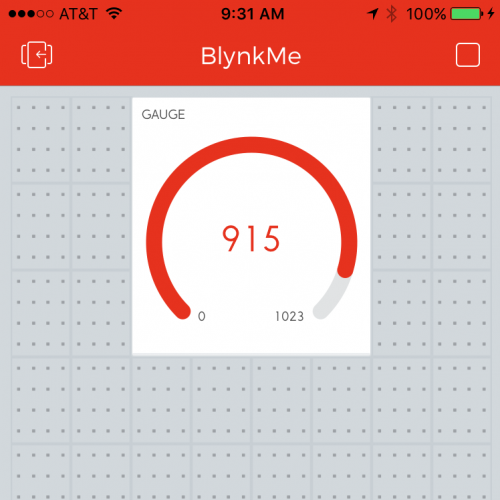 There are a variety of widgets that can be used to display the voltage at the ADC pin. In this project, we'll use the Gauge widget, which provides the real-time reading on the ADC pin in a nice, proportional manner.

The Blynk Board's ADC input is floating -- not electrically connected to any circuitry. Without something connected to the pin, the voltage may wildly fluctuate, so to produce a reliable, steady voltage, we'll need to wire it up.

There are a huge variety of analog-signal producing electronic components out there, but the most traditional is a potentiometer. "Pots" come in all sorts of shapes and sizes from rotary to linear to soft.

These are very thin variable potentiometers. By pressing down on various parts of the strip, the resistance linearly changes …

An adjustable potentiometer can open up many interesting user interfaces. Turn the pot and the resistance changes. Connect VC…

A simple slide potentiometer can go a long way. Rated at 10kOhm and 0.5W. Comes with solder tab connections. The taper profil…

To really get the most out of this project, consider grabbing a sliding linear potentiometer and three alligator clip cables. Wire up the bottom of the slide pot like below -- red cable on the pin labeled "1", yellow connected to "2" and black connected to "3". 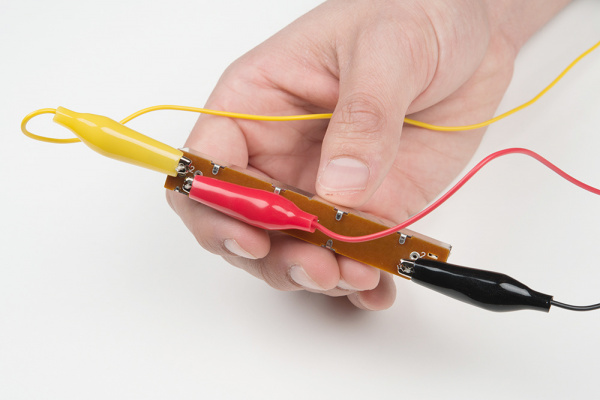 Then route the other ends of the alligator-clip cables like below -- red to 3.3V, black to GND, and yellow to ADC. 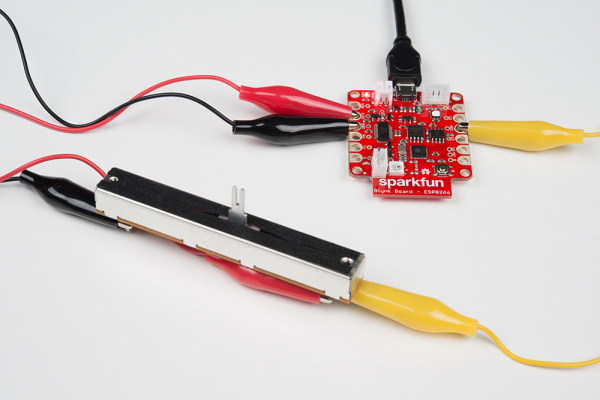 The yellow cable -- terminating on the ADC pin -- will carry a voltage that varies between 0V (GND) and 3.3V, depending on the position of the slide pot.

The Gauge widget takes up a good chunk of room, so you may need to remove some previous widgets before adding it. Keep a value widget from the previous experiment -- we'll use it to display the calculated voltage.

Connect a Gauge to ADC

You'll find the Gauge widget under the "Displays" section. Once it's added, modify the settings like so: 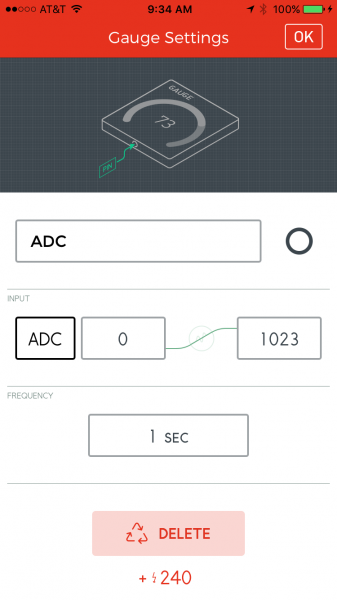 Heads up! Previous Blynk app versions allowed you to set it anywhere from four times a second (250ms) to a little less than a minute. The minimum rate that is allowed with the Blynk app is now 1 second. For advanced users, you could manually set the rate for anything less than a second using the PUSH. However, this is out of the scope of the tutorial as it would require modifying the Blynk board's firmware.

Repurpose a Value Widget to V8

If you don't want continuously do that voltage-converting math in your head, modify a value widget to display V8, and set the name to Voltage. 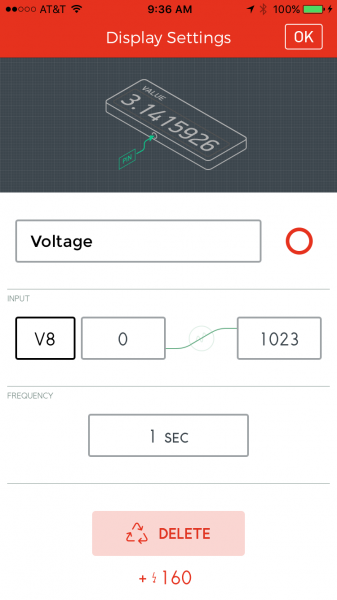 The Blynk Board will convert the ADC reading to an equivalent voltage for you.

Run the project, and watch for the gauge to settle in on a value. If you have a potentiometer wired up, the reading should remain rather steady. Try moving the wiper up and down. 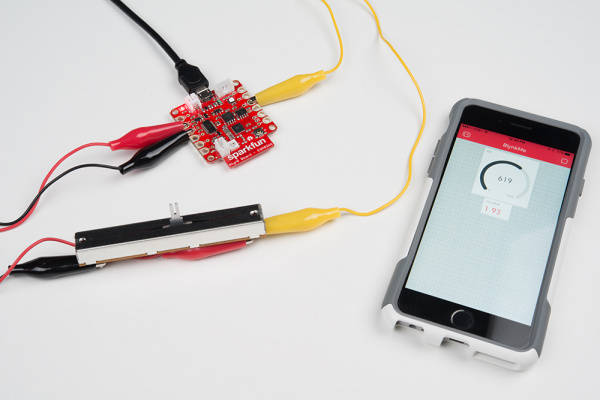 If you don't have a potentiometer handy or any way of connecting it to the Blynk board, don't fret. You're a variable resistor too! You can test out the ADC by putting a finger on the "ADC" pin.

You should be able to move the gauge around by placing another finger on either the "GND", "VIN", or "3.3V".

(Electricity is running through your body, but it's a minuscule, insignificant amount. You don't have anything to worry about.)

There are a huge variety of analog-signal producing electronic components out there. You could wire up an accelerometer, stick the circuit on a washer/dryer, and check the analog readings to observe if your laundry is done or not. Or wire up a force-sensitive resistor, hide it under your doormat, and check if anyone's at the front door.

Later in this guide, we'll wire the ADC up to a Soil Moisture sensor and connect your houseplant to your twitter account, so it can notify the world when it's thirsty.