Now that you're an expert on digital inputs and outputs, it's time to throw a curveball with analog signals. Analog values can take on any shape and be any value among the infinite possibilities in our world. 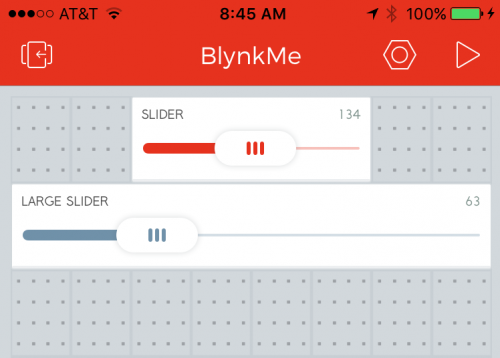 To produce analog outputs, we'll use the Slider widget in the Blynk app. The slider allows you to precisely set the value of an output on the Blynk Board -- it's not just ON or OFF. Now, you can set a value between 0-255, 0-1023, -8 to +8, or whatever else you please.

To be honest, the Blynk Board actually can't produce truly analog outputs. Instead, it quickly pulses a digital signal high and low to produce an average voltage in a technique called pulse-width modulation (PWM).

PWM waves aren't really analog, but they go up and down so fast that a lot of components – like LEDs – can't tell the difference.

Once again, you should have plenty of room left in your project -- only delete widgets if you want to clean up a bit. However, if you still have the button triggering the pin 5 blue LED, you'll need to disconnect it in order to use a slider on the pin.

One Pin At a Time

When configured to monitor or control a pin, a Blynk widget lays claim over that pin until it's disconnected. In fact, in most cases the Blynk app won't let you assign one pin to multiple widgets at once.

By limiting pin-control to one widget at time, we make sure the Blynk Board can't get confused – you wouldn't like it when it's confused.

Disconnect the Button From Pin 5 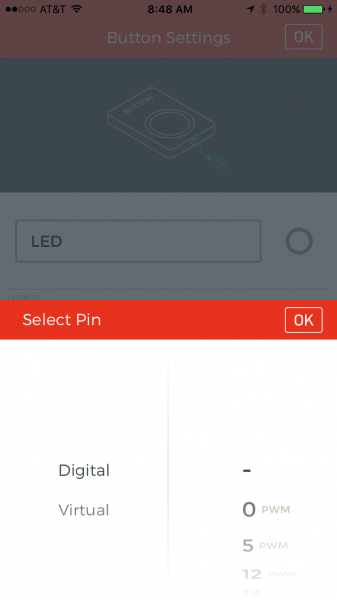 If you still have a button controlling pin 5, disconnect it by clearing the pin setting.

The button will remain in your project -- you won't lose any energy -- but it'll be disconnected from any digital or virtual pins for now. Pressing it while the project is running won't have any effect.

Connect a Slider Widget to Pin 5 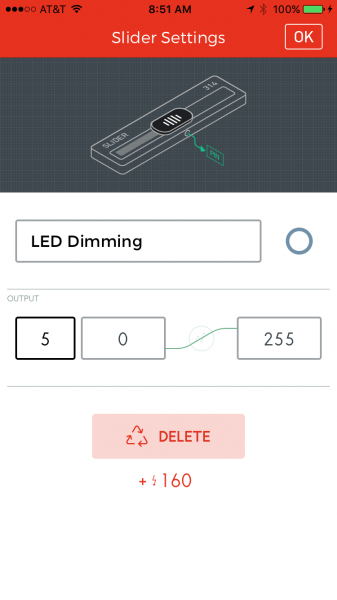 Confirm the settings, and run the project.

Once the project is running, try grabbing the slider and gradually moving it from one side to the other. The small, blue LED should brighten and dim as you do so. The closer the slider value is to 0, the dimmer it will be. 255 is 100% ON and 0 is totally off.

Sliders can take on all sorts of applications in a Blynk project. In addition to directly controlling a digital pin's PWM value, they can be used to provide a range of input to firmware running on the Blynk Board.

In fact, we've set up virtual pins 2, 3, and 4 to individually control the red, green, and blue channels of the RGB LED. Try adding three more sliders: 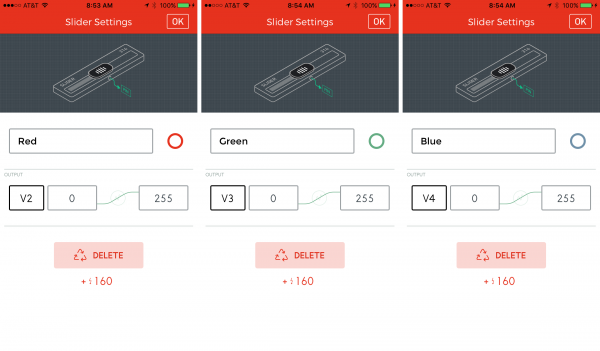 Run the project, and slide around. You may find that the three individual sliders provide more precise control over the mixed color of the RGB LED compared to the zeRGBa widget. 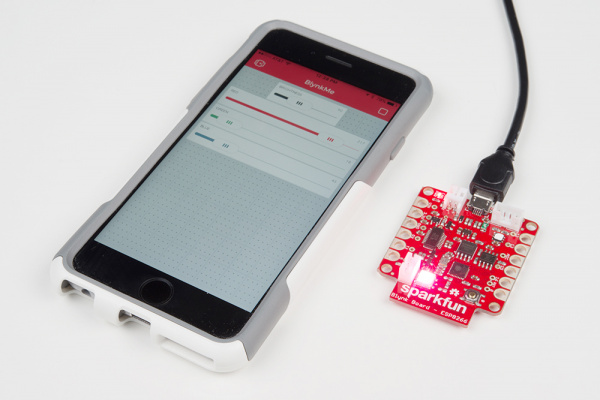 Time for another admission of guilt: We've been holding back the full awe -- and terror -- of the Blynk Board's RGB LED. In fact, we've been limiting the LED brightness to about 12.5% of it's full power.

To set the maximum range of the RGB LED add a slider to V15 -- you can re-purpose the small slider widget controlling the pin 5 LED, if you'd like. Name it "Brightness", and once again set the range to 0-255. 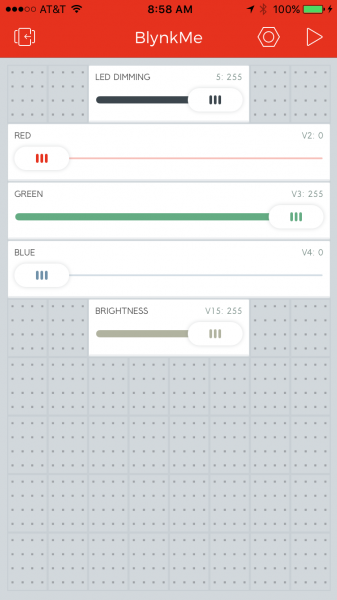 Play with all four sliders to see the full range of colors you can create. Just be careful! That LED really can get blindingly bright.

Dimming LEDs isn't all the sliders are good for. Later projects will use them as input control, setting values like Twitter timers, moisture thresholds, and sensor update rates.