Getting Started with the MyoWare® 2.0 Muscle Sensor Ecosystem

⚡ Danger: When connecting your MyoWare 2.0 Muscle Sensor to a computer for Serial debugging, it is suggested to have a USB isolator with the MyoWare 2.0 Muscle Sensor to prevent noise in the inputs and safeguard against electrical shock when connected to a power grid (such as a computer power supply, computer docks, and external monitors connected to a wall outlet). The diagram below shows USB isolator (as shown as a blue board) between a desktop and the Arduino's USB port. 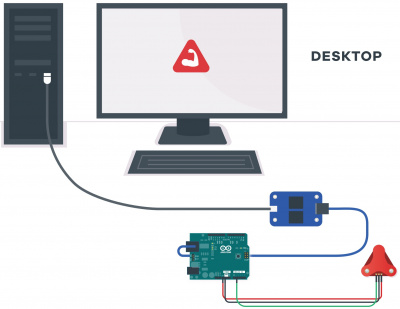 If you do not have a USB isolator, try using a laptop running on battery power and ensure that you are not connecting the laptop to a wall outlet. 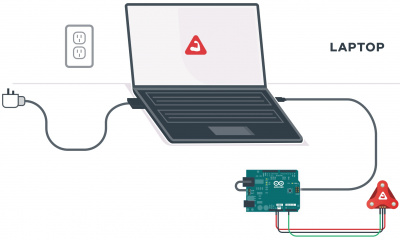 We also recommend using a wireless keyboard and mouse when programming in Arduino. The muscle sensor is sensitive enough that it can also pick up a signal from the trackpad or keyboard on your laptop when running on power. As a result, the muscle sensor will have false readings and the Arduino's analog pin will read high.
Note: This example assumes you are using the latest version of the Arduino IDE on your desktop. If this is your first time using Arduino, please review our tutorial on installing the Arduino IDE. If you are using the RedBoard Artemis, please check out our guide on installing board definitions.

⚠ Warning: Do not change the output (between RAW, RECT, ENV) for the MyoWare 2.0 Link Shield while the board is powered. Adjusting the output switch can cause voltage spikes and damage the muscle sensor.

The following example uses an analog input on the RedBoard Plus with an Atmega328P to read the muscle sensor's analog signal. However, you could also use any microcontroller with the Arduino Uno R3 footprint. 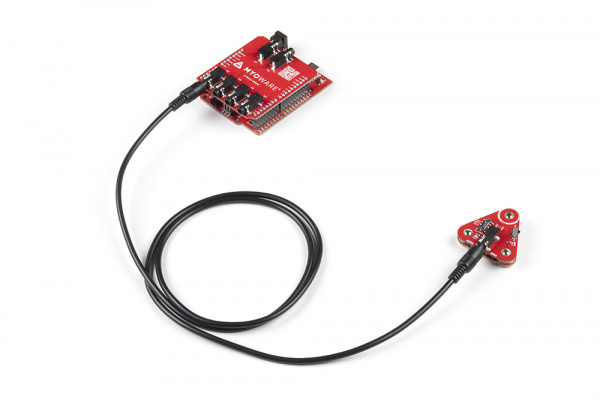 If you have not already, select your Board (in this case the Arduino Uno), and associated COM port. Upload the code to the board.

Once uploaded, open the Arduino Serial Plotter (Tools > Serial Plotter) to 115200 baud. Flip the power switch on the MyoWare 2.0 Link Shield to provide power and start flexing! You should see something similar to the output below with the envelope signal. In this case, the MyoWare 2.0 Muscle Sensor was attached to my right forearm. For those that are interested in viewing the serial output, you can also open the Arduino Serial Monitor to see the values. 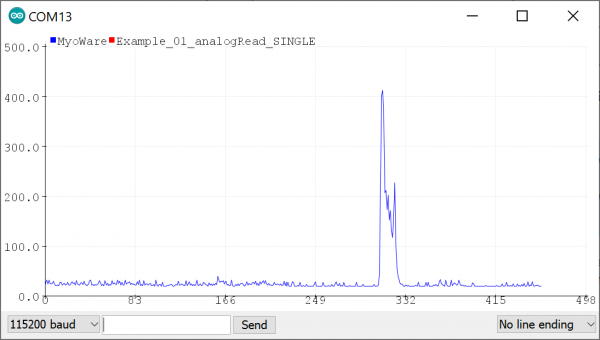 The images below show the forearm being flexed at around 300ms when the signal increases by a value of about 22 for the rectified output and about 20 for the raw output. Note that the raw signal will be centered around a voltage offset of about +VIN/2. Make sure that the +VIN is the maximum voltage of your microcontroller's ADC to ensure that you can see the positive and negative portions of the waveform. The output shown in the graphs are values and have not been converted to voltages.