While flashing an LED is not the most interesting activity, we could use the LED as a way to notify us if something is happening. For example, we could turn on an LED if we have a new email. That way, we would know that we needed to check our inbox!

To do this, we will have the Edison log in to an email account, read the number of unread emails, and turn on an LED if it is over 0.

NOTE: This example shows how to connect to Gmail and Yahoo mail servers. If you are not using one of those, you still might be able to connect (see here for a list of IMAP servers), but only Gmail and Yahoo have been tested. Also, you will need to enter your username and password as plain text into the code. It's a fun project, but you don't have to do it if you are not comfortable with that!

We'll be using the same circuit as in the previous example, so you don't need to build anything new! In addition to the Edison and Block Stack, you will need the following parts:

In the previous few examples, we have been relying on the MRAA module to control various hardware from the Edison. MRAA comes pre-installed on the Edison, so we did not have to perform any extra steps to install it. However, in this example, we will use node-imap, which contains several useful functions for connecting to Internet Message Access Protocol (IMAP) servers and retrieving email.

If we were to log in to the Edison via SSH or serial terminal, we could install Node.js packages (e.g. modules) using the npm command (e.g. npm install imap). However, with the XDK, we can tell the IDE to install necessary modules automatically whenever we upload code. This is accomplished by adding the library name to a list of dependencies in the project. The specifics on how to do this can be found in "The Code" section. 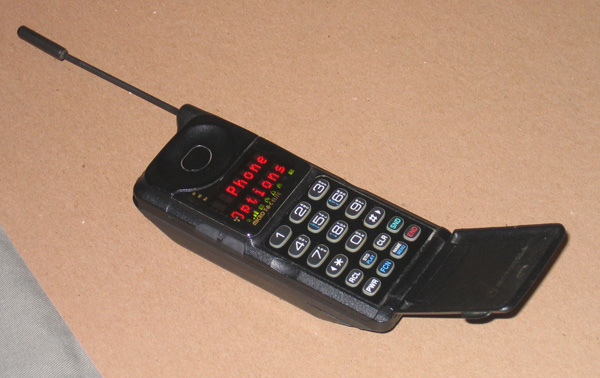 I wonder if caller ID was a feature

A callback is a piece of code (often a function) that is expected to be called by another piece of code at a convenient time. A popular way to use callbacks in web programming is to assign a function to a mouse click event. For example:

Whenever a user clicks on the web page element (called element in this example), myFunction() gets called. In this instance, myFunction() is the callback, and our assignment, element.on('click', myFunction);, is known as creating an event handler. See here to learn more about the .on() event handler.

The circuit is the same as in the previous experiment. 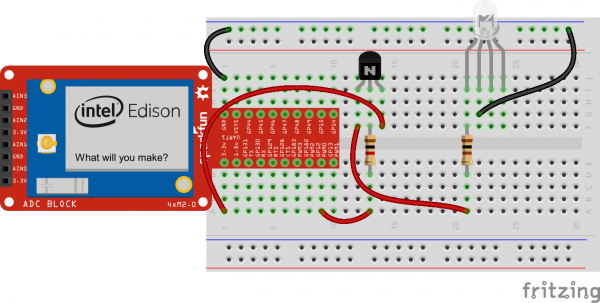 Create a new project in the XDK. Click on package.json in the files browser on the left pane. Add the line

under "dependencies". This will tell the XDK to download and install the node-imap v0.8.16 module before running the program. 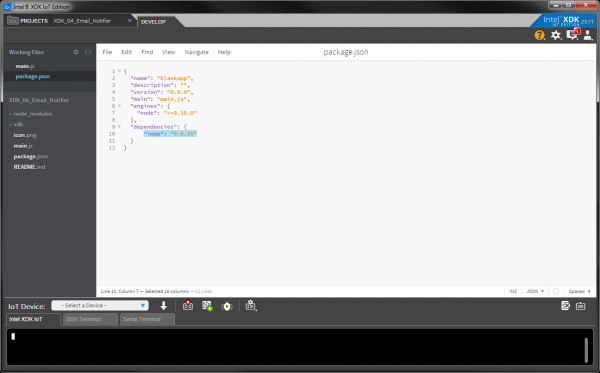 NOTE: If you are using Gmail, you will need to go to the account security settings page and turn access for less secure apps to ON. We recommend turning it off once you are done with this exercise (unless you want to keep a permanent email notifier!).

When uploading the code, you might see some notifications that the XDK is downloading and installing npm packages. Just be patient while the packages are installed. 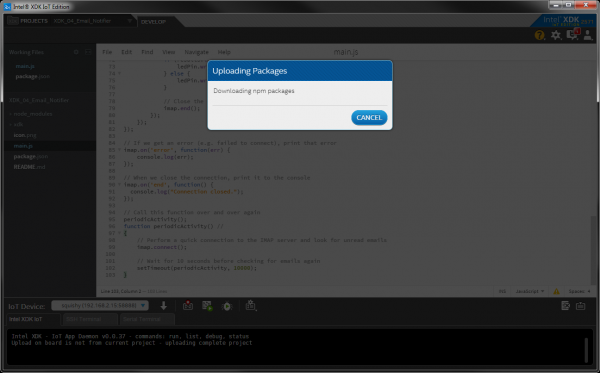 When you run the code, it should connect to your email account and print to the console the number of unread emails every 10 seconds.

If you have one or more unread emails, the red LED should come on. 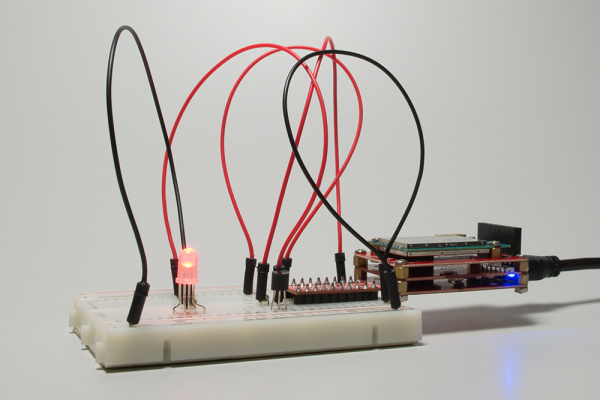 I know that we talked about callbacks in the Concepts section, but now we get to see them in action. The node-imap package heavily relies on them, so it is important to get used to them if you plan to use that package in the future.

imap.on is used several times. This function gets called when something particular happens in our program. These are known as "Connection Events" according to the Application Program Interface (API) documentation. We can define particular connection events using strings.

For example, imap.on('ready', function() {...}); allows us to define a function (as noted by the function() keyword) that is called whenever a successful connection is made with the IMAP server.

imap.on('end', function() {...}); is called whenever the connection with the server is closed.

There is another seemingly odd callback. In our imap.on('ready',...) code, we call openInbox(function(err, box) {...});. A few lines above, we define the openInbox() function, which tells the imap object to open our inbox and then call another function (as denoted by cb for "callback"). This callback function (cb) is the function we defined inside openInbox(function(err, box) {...});. So yes, we call a function that accepts another function as a parameter, which then calls that function as a callback. Don't worry if this was confusing; it is a bit hard to follow. Knowing how to use the .on() callback functions is the most important part of this exercise.

Being able to appropriately deal with errors is a very useful ability in a program. The example relies on if (err) throw err; to determine if an error has occurred (e.g. could not connect to the IMAP server).

If we dig into the node-imap code, we would likely find a few catch statements. if (err) only executes the second part (throw err) if an err actually exists (not null or undefined). throw stops execution within that loop, function, etc., and program control is passed to the first catch statement it finds within the calling stack (e.g. look for a function that called the callback withing a try/catch statement).

If an error occurs, the node-imap module calls our callback function imap.on('error', function() {...});, which lets us handle the error. In this case, all we do is print the error to the console.