We will continue with the concept of BLE. This time, we will keep the phone as the central (master) device, but we will use the Edison as a controller to send data as notifications to the phone.

In this experiment, we are going to construct a type of very powerful (probably overkill) Bluetooth game controller out of the Edison with 4 buttons. The Edison will periodically poll the state of these buttons and notify the smartphone over BLE of any button pushes.

On the phone, we will create a very simple "game" that consists of a red ball in the middle of a box. Pushing one of the four buttons on the Edison will cause the ball to move in a cardinal direction (up, down, left, or right). While the game itself does not have a real purpose, it could easily be the starting point for a real video game that requires some kind of Bluetooth controller.

IMPORTANT: Cordova needs to run native code on your smartphone in order to operate. As a result, you will need to be able to install native apps.

In previous experiments, we have either used existing objects or created a one-off object in JavaScript with something like:

In this experiment, we finally get to create our own object. If you are familiar with other object-oriented programming language, you might be familiar with the concept of a class. JavaScript is considered classless, since you can create objects without a blueprint (class). However, there are times when we want to create several instances of an object and don't want to rewrite code. As a result, JavaScript still offers us a way to create classes.

The class is like a blueprint or a recipe. We create properties and functions that all objects of that type must have (it saves us rewriting lots of code when we want many ojects of the same type). To define this blueprint in JavaScript, we first create a constructor and assign any members (variables unique to that object).

We've just created an object from our class! It is very similar to following a blueprint, schematic, or recipe to make a bridge, circuit, or meal. myInstance, thanks to the constructor, contains a member variable called _member. The value of _member is unique to that one instance. We can access that value with myInstance._member in order to get or set its value.

In addition to members, we can create functions that are shared among all instances of our class. We need to use the special keyword prototype:

Some jargon you should be aware of:

Here is a basic example of a class and some instances created from that class. Feel free to run the code on your Edison. What do you expect to see in the console when you run it? Can you identify the class, the instances, the member, and the methods?

Almost all video games rely on the Game Loop. This loop is a simple programming construct with 4 parts and executes endlessly (at least until the game ends).

The Game Loop consists of the 4 main parts:

In our experiment, our game loop is only going to consist of steps 3 and 4. Thanks to JavaScript's asynchronous nature, we will update the game variables (the position of a ball) whenever a button push event arrives over BLE from the Edison. This means that the Edison is handling step 1 (polling for button pushes), and the phone is handling step 2 asynchronously (whenever a button push event arrives).

However, steps 3 and 4 will still execute in an endless loop. Every 50 ms, the game's canvas (play area on the phone) is cleared and a new ball is drawn in the position determined by the ball's x and y properties. We then wait for the rest of the 50 ms until the draw function is called again. 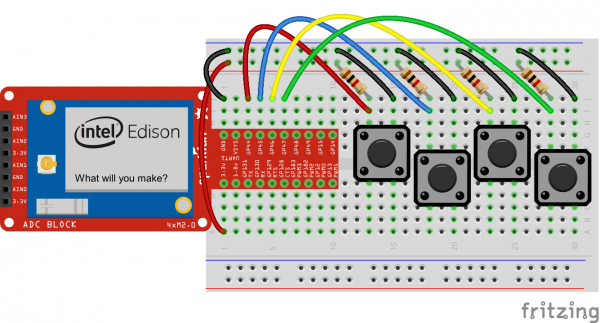 Before we run any code on the Edison, we need to enable Bluetooth. Connect via SSH or Serial, and enter the following commands:

In the XDK, create a new Blank IoT Application. In package.json, copy in the following:

In main.js, copy in the following:

As in the previous experiment, create a blank HTML5 + Cordova app under HTML5 Companion Hybrid Mobile or Web App.

In the project settings, add the plugin cordova-plugin-ble-central. 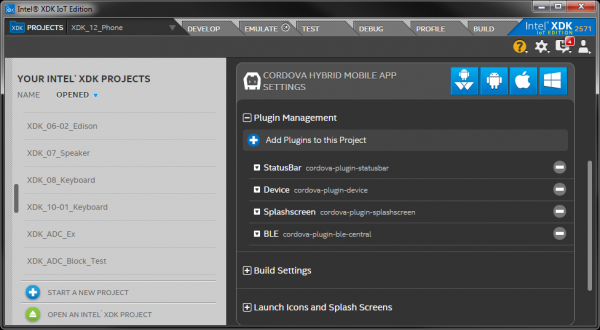 Once again, we need to include jQuery. Download the latest, uncompressed version of jQuery from http://jquery.com/download/. Create two new directories in your project so that you have /www/lib/jquery. Copy the .js file into the jquery directory.

Go back to the Develop tab. In www/index.html, copy in the following:

In www/js/app.js, copy in the following:

Refer to the previous example on how to build the phone app for your smartphone.

Make sure that you have enabled Bluetooth on the Edison and that it is running the controller program. Run the phone app, and you should be presented with an input, a blank game canvas, and a debugging console (much like in the last experiment). Enter Edison into the input field and tap Connect. 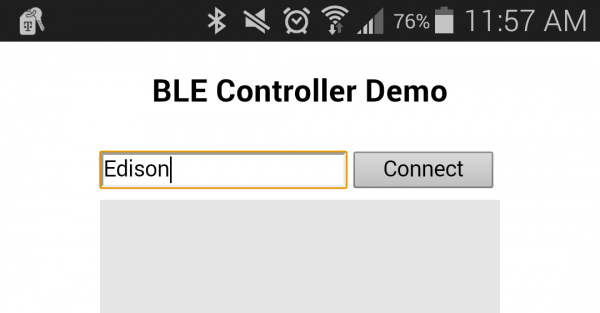 Once your phone connects to the Edison, a small, red ball should appear in the middle of the canvas (you should also see a "Connected to" message in the debugging console). Push the buttons connected to the Edison to move the ball around! 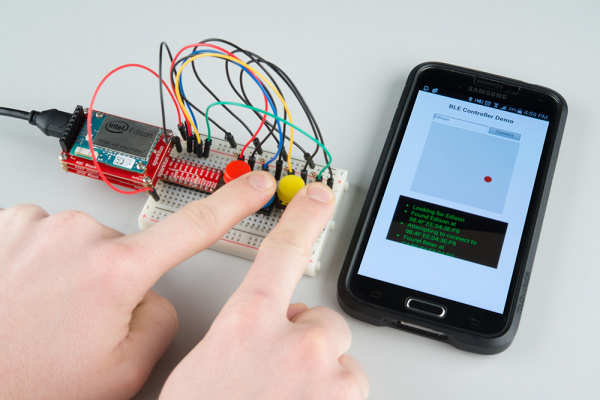 As introduced in the Concepts section, we create a class named Game along with some members and methods. The window.app.game object (an instance of the Game class) is responsible for remembering the ball's X and Y coordinates (stored as variables within the this._ball member) as well as drawing the ball on the canvas, which is accomplished using an HTML Canvas element.

Once a BLE connection has been made, the program starts the game loop by calling window.app.game.start(). This function sets up an interval timer that calls the .draw() function every 50 ms. In .draw(), the canvas is cleared, and the ball is drawn every interval.

In window.app.onNotify, which is called on a received BLE notification, the BLE's data (the first and only byte) is parsed to determine which way the ball should move. A received '0' means "move the ball up", '1' means "down", '2' means "left", and '3' means "right". Updating the ball's position is accomplished by calling window.app.game.updateBallPos(dx, dy).

In the previous experiment, we needed to hardcode the Edison's Bluetooth MAC address into the program. This time, we take a different approach. When the user presses the Connect button, the program retrieves the value of the input (ideally, "Edison") and stores it in the global window.edison object (as window.edison.name).

The program then scans for all available BLE peripherals, noting their names (device.name in the onDiscoverDevice callback). If one is found to be equal to window.edison.name (ideally, "Edison" once again), the program attempts to connect to that device. No need to set the MAC address anywhere!

In the Edison code, we assign the BLE name "Edison" in the global edison object. If we change that name, we will need to enter the same name into the input field of the phone app.

'sendNotification(buf)calls the functionupdateValueCallback()with the data it received from the caller (buf`). The causes the bleno module to send a notification for that particular characteristic over BLE.

On the phone side, cordova-plugin-ble-central is configured to subscribe to the characteristic with ble.startNotification(...). Notifications to that characteristic call the function onNotify(), which then parses the received data to determine how to move the ball.

This and That (Dummy Functions)

As mentioned previously, the keyword this refers to the calling object. Sometimes, we have to create a wrapper around a callback function so that we can pass the object to the function.

For example, in the phone code app.js, the method Game.prototype.start uses the built-in function setInterval() to call the draw method repeatedly. As it is, setInterval() is a method of the global window object. If we were to write

the keyword this (only within setInterval) would refer to window, not the Game object! And, as you might guess, window has no draw() function. This piece of code would throw an error (unless you made a window.draw() function).

To get around this, we first assign this to a placeholder variable, which we will (humorously) call that. Then, we can create a dummy function as the callback for setInterval, which calls that.draw(), referring to the draw() method in the Game object.