In this circuit, we'll again bridge the gap between the digital world and the analog world. We'll be using a piezo speaker that makes a small "click" when you apply voltage to it (try it!). By itself that isn't terribly exciting, but if you turn the voltage on and off hundreds of times a second, the piezo speaker will produce a tone. And if you string a bunch of tones together, you've got music! This circuit and sketch will play a classic tune. We'll never let you down!

To learn more about polarity, check out our What is Polarity? tutorial!

If the piezo speaker doesn't easily fit into the holes on the breadboard, try rotating it slightly.

Pay special attention to the component’s markings indicating how to place it on the breadboard. Polarized components can only be connected to a circuit in one direction. Orientation matters for the following component: Piezo Speaker. It's hard to tell which pin is '+' and which is '-' from the image below. The buzzer should have a tiny '+' simbol on one of the pins. This pin should be connected to pin 2, and the other pin should go to GND. 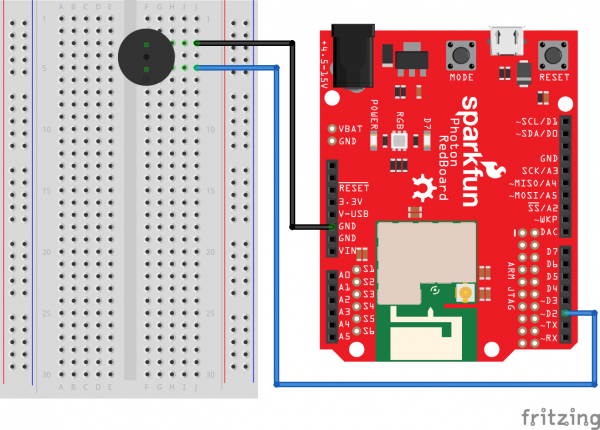 You should see - well, nothing! But you should be able to hear a song. If it isn't working, make sure you have assembled the circuit correctly and verified and uploaded the code to your board or see the troubleshooting section. 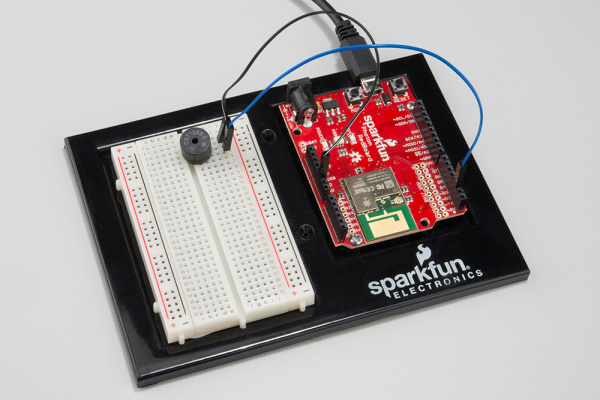 See if you can recreate your favorite songs!

Up until now we've been working solely with numerical data, but the Photon RedBoard can also work with text. Characters (single, printable, letters, numbers and other symbols) have their own type, called "char". When you have an array of characters, it can be defined between double-quotes (also called a "string"), OR as a list of single-quoted characters.

One of Photon RedBoard's many useful built-in commands is the tone() function. This function drives an output pin at a certain frequency, making it perfect for driving piezo speakers. If you give it a duration (in milliseconds), it will play the tone then stop. If you don't give it a duration, it will keep playing the tone forever (but you can stop it with another function, noTone() ).