Some of the experiments will have two parts. The first part, will focus on teaching you about electronic concepts and technologies and how to build a circuit around those. The second part is bonus material showing you how to connect your circuit to the Internet or creating a more complex circuit. You will be able to complete part one of each experiment with the included parts. However, the second half of each experiment relies on outside services, websites and technologies, some of which you may not have access to or may not want to engage in. Should part two of a particular experiment not interest you, you may move on to the next experiment.

LEDs (light-emitting diodes) are small, powerful lights that are used in many different applications. To start off the SIK for Photon, we will work on blinking an LED using a digital output. Chances are you have blinked an LED before, or perhaps this is your first time -- but have you turned on an LED with the Internet? Blinking an LED is the most basic "Hello World" test for hardware, but now we're going to be saying "Hello Internet." This experiment will also walk you through uploading your first sketch with the Particle IDE.

Ready to party? Components like resistors need to have their legs bent into 90° angles in order to correctly fit the breadboard sockets. You can also cut the legs shorter to make them easier to work with on the breadboard.

Pay close attention to the LED. The negative side of the LED is the short leg, marked with a flat edge.

Each experiment will have a Fritzing hook-up diagram. Connect the components to the breadboard and Photon RedBoard by following the Fritzing diagram below:

Pay special attention to the component’s markings indicating how to place it on the breadboard. Polarized components can only be connected to a circuit in one direction. Orientation matters for the following component: LED 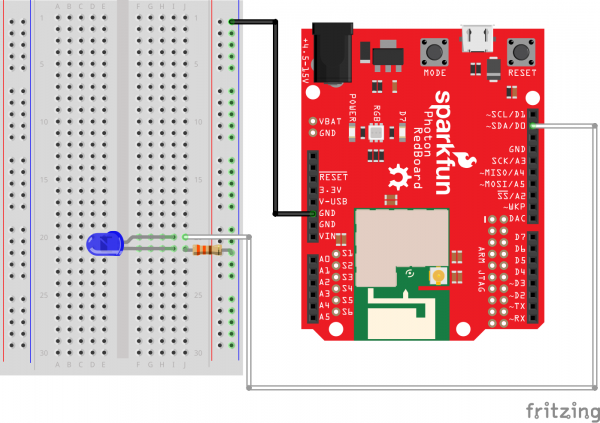 All jumper wires work the same. They are used to connect two points together. All the experiments will show the wires with different colored insulations for clarity, but using different combinations of colors is completely acceptable.

Be sure to the polarity on the LED is correct. The longer lead should be connected to D0. You will need to slightly bend the longer leg so that both are the same length when placed int he breadboard.

Using an online IDE might be little different at first for some users, but it ends up being fantastic. You can program your Photon from anywhere in the world as long as you have an Internet connection.

There will be a breathing cyan dot next to your Photon RedBoard in the Devices section.

For each experiment, we recommend creating a new app. Go to the Code section in the navigation bar on the left. The hit the CREATE NEW APP button. After typing in the name, you can hit enter.

When you create a new app, particle build creates an .ino file and renames the tab in the Particle Build editor.

Let's add the code! Copy and paste the code below into the in Particle Build editor. You can simply hit the COPY CODE button below and paste (Right-click then click Paste or Command + V) into the Particle Build Editor.

Once you've pasted the code into the window, let's get in the habit of checking our code. Hit Verify (circle icon with a check mark in the top left of the Particle Build's IDE navigation bar) to check if there is any errors in the code. Next, hit Save (folder icon) to save our code, so we can come back to the code later if we want to.

First-Time Firmware Update: The first time you upload a sketch to your Photon or Photon RedBoard, you will likely encounter an over-the-air firmware update. Particle has built in this feature so that the first time you upload code to the device, it will go out and grab the latest firmware from the Particle Cloud. Please BE PATIENT. This may take several minutes. Do not press any buttons or remove power from the device during this time. You will know the device is updating via the RGB LED blinking random bursts of pink (magenta). It should look distinctly different from the flashing magenta that accompanies a user uploading their sketch, which is more of a steady, fast blink. You may need to go through this procedure twice for the entirety of the firmware to be downloaded over the web. Most of the firmware files for the Photon devices come in two parts. If your device is still blinking pink once it connects to the Internet after the first over-the-air update, give it a few moments to download the second half.

If there are any invalid characters (such as ':') in your code or something is syntactically incorrect, you will get the following error when attempting to flash your device:

Error: Could not compile. Please review your code. 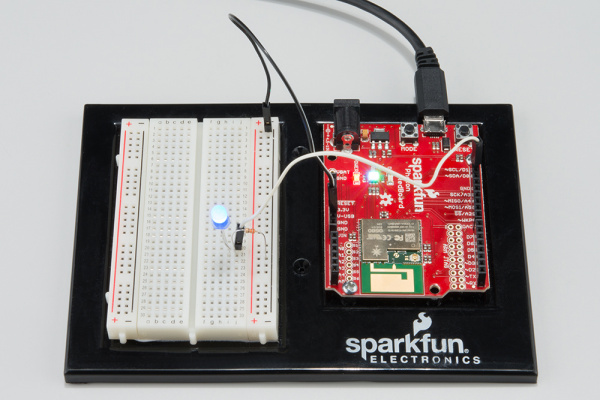 Great job on successfully uploading your first sketch. If you want to learn how blink an LED with the Tinker mobile app, you can head to part 2 of this experiment!

A variable can be a number, a character, and even a string of characters. We'll often use variables to store numbers that change, such as measurements from the outside world, or to make a sketch easier to understand (sometimes a descriptive name makes more sense than looking at a number).

Variables can be different "data types", which is the kind of number we're using (can it be negative? Have a decimal point?) We'll introduce more data types later, but for the moment we'll stick with good old "integers" (called "int" in your sketch). Integers are whole numbers (0, 3, 5643).

You must "declare" variables before you use them, so that the computer knows about them. Here we'll declare a integer variable, and at the same time, initialize it to specific values. We're doing this so that further down, we can refer to the pin by name rather than number.

Note that variable names are case-sensitive! If you get an "(variable) was not declared in this scope" error, double-check that you typed the name correctly.

Here we're creating a variable called "led" of type "int" and initializing it to have the value "0":

The Photon RedBoard has digital input/output pins. These pins can be configured as either inputs or outputs. This is declared with a built-in function called pinMode(). The pinMode() function takes two values, which you type in the parenthesis after the function name. The first value is a pin number (or variable representing a pin number), and the second value declares how the pin behaves, usually as some sort of INPUT or OUTPUT.

Here we'll set up pin 0 (the one connected to a LED) to be an output. We're doing this because we need to send voltage "out" of the Photon RedBoard to light up the LED.

When you're using a pin as an OUTPUT, you can command it to be HIGH (output 3.3 volts in this case), or LOW (output 0 volts).

For more info on the types of PinModes available, visit the Particle Documentation.

There are different ways to make comments in your code. Comments are a great way to quickly describe what is happening in your code.

/* This is also a comment - this one can be multi-line, but it must start and end with these characters */

Part 2: Blink an LED with Tinker

Tinker is a mobile app for iPhone or Android smartphones that makes it easy to control your digital and analog pins on your Photon or Photon RedBoard.

First you will need to download the app on your smartphone.

When the app is done installing on your phone, you will need to sign in with your login information (the same as the Particle website). After logging in, you will see a list with all your devices. 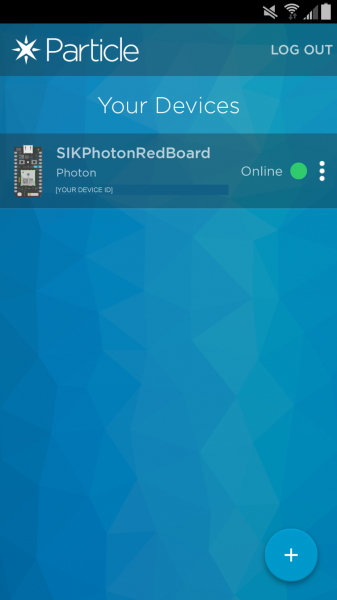 Clicking on the more icon (three dots) next to the online dot, gives you more options from which to choose. For example, you can rename your board here. We suggest naming your Photon RedBoard with unique names. When you start having a lot of Photons and demos going at once, it is hard to remember which is which.

Reflash Tinker Since Tinker was overwritten when we uploaded the blink code from part 1, we'll need to reflash it. Navigate to the 'more' tab mentioned above. If there is a little yellow circle next to the device you want to use, it is online but does not have Tinker firmware running on it. 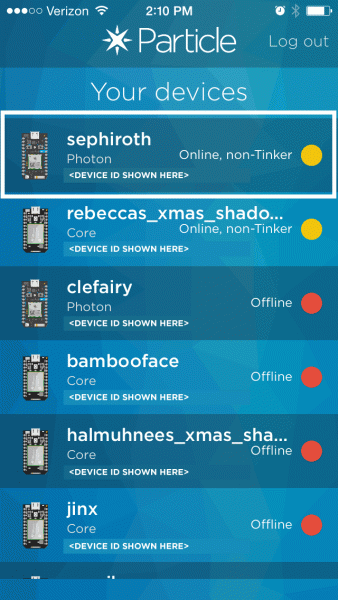 When you tap on one of these devices, it will give you the option to reflash the Tinker firmware. 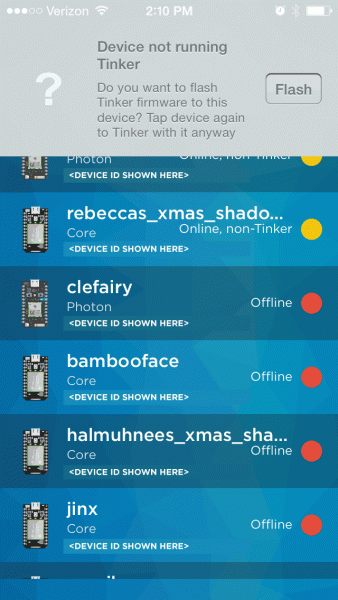 Click flash, and wait for your device to come back to a breathing cyan state.

When you click over the name of the Photon RedBoard you want to work with, you will see a new screen with a list of the different pins you can control. 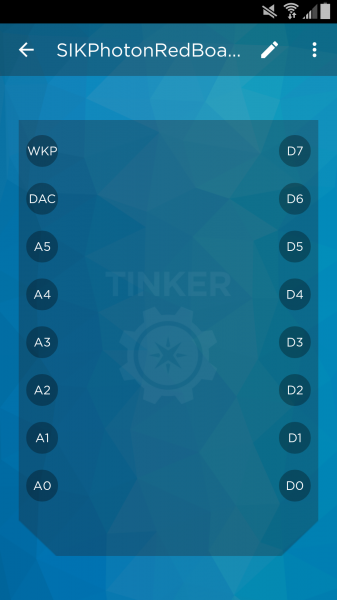 First, click the circle that is label with D0. Anytime you want to work with a pin, you will need to select it first. You can select multiple pins at a time. 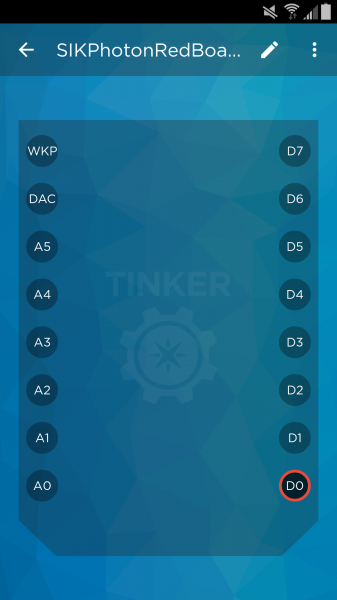 You'll notice that you have a couple different options. For this example, we are going to control the LED ON and OFF, by clicking on digitalWrite. 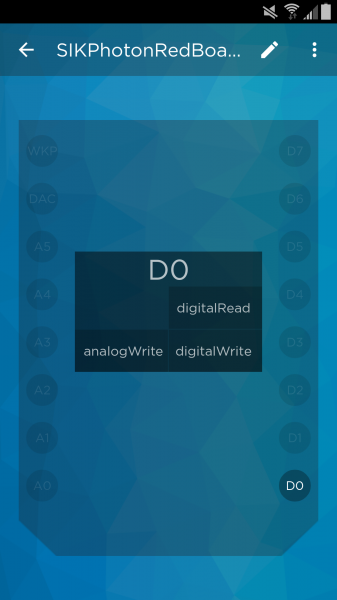 New Photon Code (There is none!)

What is great about this mobile app, you do not have to do any coding! Once you are signed into Tinker, you can start playing with the pins.

To turn the LED ON/HIGH, click the circle labeled D0 again. It should show the LED turn on. 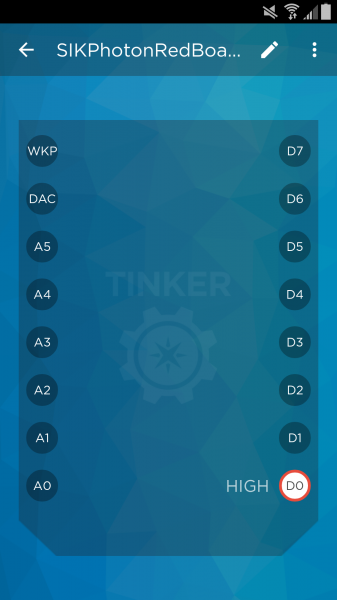 To turn the LED OFF/LOW, click the circle labeled D0 again. It should show the LED turn off. 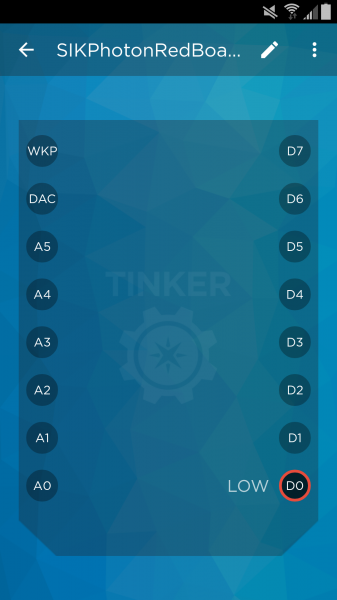 This is a super fun and easy way to control an LED or any other hardware. To reset all the pins and start fresh, click on the more icon (three dots) on the top right. You will see Reset all pin functions option.