Experiment 2: With the Touch of a Button

Now that you have conquered blinking an LED and know what an output is, it is time to learn inputs!

In this circuit, we’ll be introducing one of the most common and simple inputs – a push button – by using a digital input. Just like the LED, the push button is a basic component that is used in almost everything. The way a push button works with your Photon is that when the button is pushed, the voltage goes LOW. You Photon reads this and reacts accordingly. RedBoard Photon has internal pull-up resistor, which keeps the voltage HIGH when you're not pressing the button.

This is a simple 4-pack of momentary, multicolor buttons, great for all sorts of projects! Unlike previous iterations of mult…

One of the things that makes the Photon RedBoard so useful is that it can make complex decisions based on the input it's getting. For example, you could make a thermostat that turns on a heater if it gets too cold, or a fan if it gets too hot, and it could even water your plants if they get too dry. In order to make such decisions, the particle environment provides a set of logic operations that let you build complex "if" statements. They include:

You can combine these functions to build complex if() statements. For example:

...will turn on a heater if you're in heating mode AND the temperature is low, OR if you turn on a manual override. Using these logic operators, you can program your Photon RedBoard to make intelligent decisions and take control of the world around it!

Your kit comes with a bunch of different color push button. All push buttons behave the same, so go ahead and use your favorite color! Add the push button to the same LED circuit from the first experiment. Follow the Fritzing diagram below.

Pay special attention to the component’s markings indicating how to place it on the breadboard. Polarized components can only be connected to a circuit in one direction. Orientation matters for the following component: LED
While buttons aren't necessarily polarized (they can be flipped 180° and still work the same), they do have an orientation that is correct. The legs of the button protrude out of two sides of the button, while the other two side are bare. The sides with the legs should be on either side of the ravine on the breadboard. 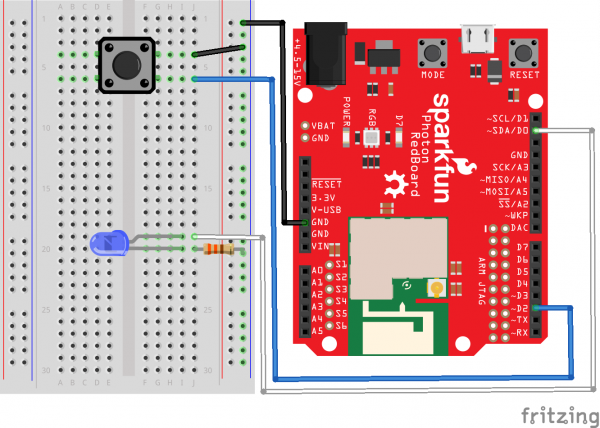 Copy and paste this code into the IDE. Then upload.

When you hold down the push button, those warm fuzzy feelings from the first experiment should happen again, and the LED should shine brightly. The LED will be off when the button is released. 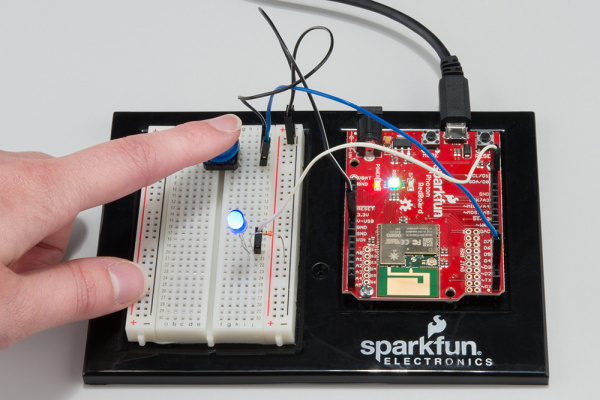 The digital pins can be used as inputs as well as outputs. Before you do either, you need to tell the Photon which direction you're going. Normally, with push buttons we would use a pull-up resistor. However, you can program the Photon RedBoard to use its internal pull-up and pull-down resistors.

Part 2: Control the Internet with IFTTT and Push Button

Have you ever wanted to control something on the Internet with a touch of a button? How about having a button that orders new laundry detergent when pressed? Okay, that has already been done with Amazon Dash Button. However, you can make one too! For the second part of this experiment, we are going to use IFTTT to send an email when the push button is pressed.

A fun feature of the Photon RedBoard is that it works with Particle's IFTTT channel. IFTTT is short for "if this then that." It is a free site that makes connecting different popular apps or products really easy and fast!

What is great about IFTTT is that you do not need a lot of extra code. This is the only piece of code we added. Visit the Spark.publish() page to learn more.

Now that the code is loaded on your Photon RedBoard, we can jump into setting up IFTTT.

Sign up, or log into IFTTT, and activate your account from your email address. For this experiment we are going to create an IF recipe. The IF recipe is connecting two different apps and products in an if this then that statement. Click on My Recipe on the top navigation bar on the IFTTT site.

Follow the 7 steps below to create an IF recipe. 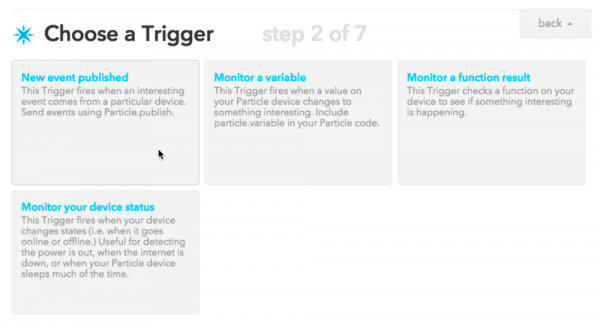 This is where you will enter the published event name. Type in pushButtonState in the If (Event Name) field. Go ahead and select your personal Photon RedBoard from the drop down menu. 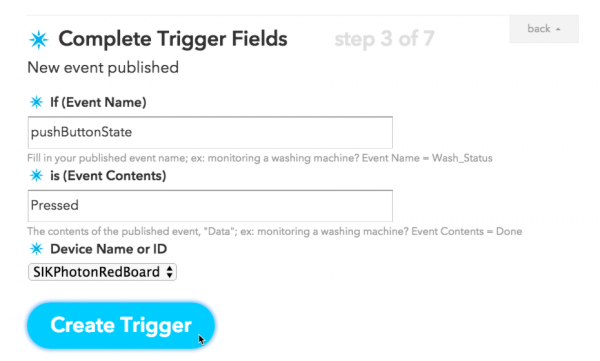 Click on the that button and find the Email Channel.

Remember, your Photon RedBoard has the unique name you gave it and will show up differently then the above image.

Depending on what Channel you are using, there might be one or more different actions you can choose from. For this experiment, we will send an email.

You can customize what you want to see in the subject and body of your email. 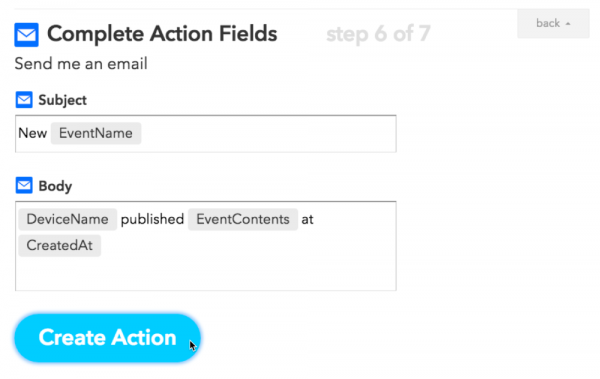 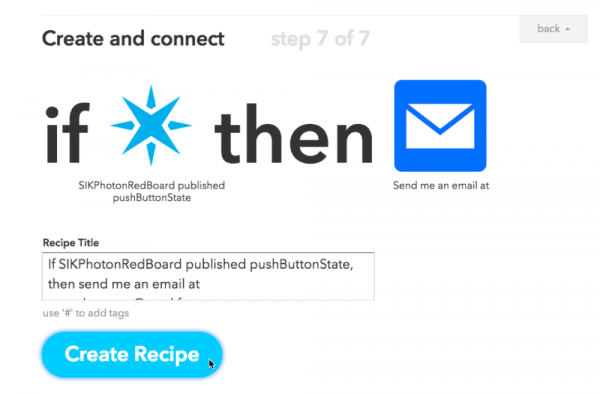 When you push down on the button, an email will send! You might have allow the gearworks of the internet to churn for a minute or two, but you should be able to see a new email. If you don't feel like waiting, go ahead and click on the refresh-looking icon, named "Check Recipe now".

You might have noticed there's a vast amount of options for creating recipes. The possibilities are endless! Using the same code, here are a few more examples on what you can do: