In this experiment you'll learn about analog input and output, the difference between analog and digital, and how to incorporate analog inputs and outputs into your project. We will also touch on some more advanced concepts, like using internal pull-up resistors and integrating with Twitter via IFTTT (If This Than That).

This is a simple 4-pack of momentary, multicolor buttons, great for all sorts of projects! Unlike previous iterations of mult…

There are a variety of core concepts in electronics that we will be touching on in this circuit, but not discussing in depth. However, we do have some great tutorials that go into more detail about what's going on behind the scenes.

Connect the components on the breadboard and wire them to the Photon RedBoard as shown below. The red button should go to pin D2, the green button to D3, and the blue button to pin D4. The potentiometer should go to pin A0. Don't forget to run power (3.3V) and ground (GND) from your Photon to your breadboard. 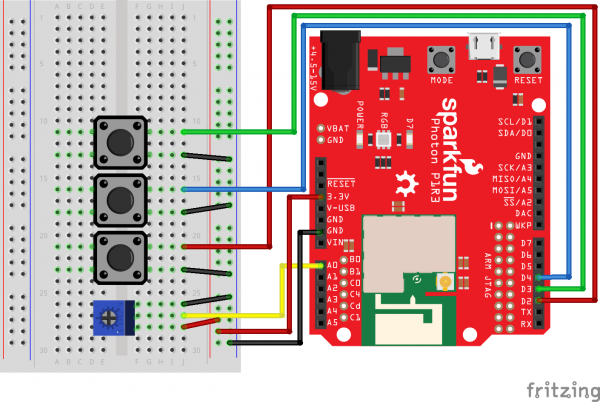 Copy and paste this code into the IDE. Then upload.

After the you click 'flash' and the upload process is complete, you should be able to control the color and brightness of the Photon RedBoard's onboard LED. The buttons will turn the LED red, green, or blue, and turning the potentiometer will affect the brightness of the LED.

Pretty neat, huh? Now, let's take this circuit and make it a part of the Internet of Things!

Part 2: Turn on an LED with IFTTT (If This Then That)

IFTTT is a website that uses conditional statements and does very useful things with well known applications, such as Gmail, Craigslist, Twitter, or Facebook. For this experiment, we're going to tweet the color of your LED.

Since we'll be needing IFTTT to communicate with our Photon RedBoard, we'll need to modify our code. Particle.io has created many useful IoT functions for the Photon RedBoard, and we'll be using one of them -- more specifically Particle.function(). In our case, we're going to find a way to 'tweet' an RGB color value, and have the onboard LED of the Photon RedBoard turn that color.

Go ahead and paste this code into the Particle Build IDE. Then upload.

Now that we've prepped our code to talk with the IFTTT service, we have to actually sign up for it and create our Internet of Things 'recipe'. If you're completing the exercises in order, you will have signed up for IFTTT in the last exercise, if not, go ahead and sign up now. 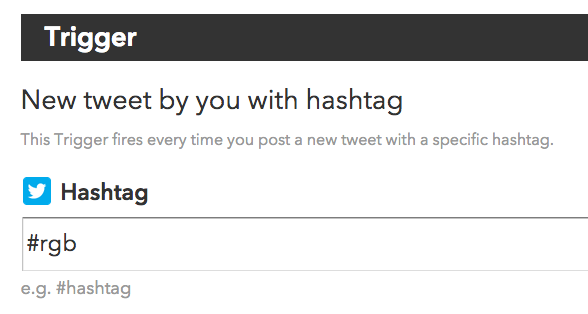 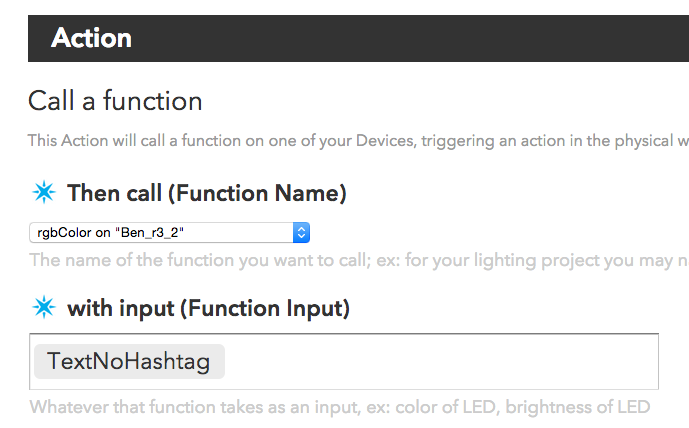 Great! You've just created an IFTTT recipe that calls our rgbColor() function whenever we send a tweet with a specific hashtag.

Send a tweet with the hashtag #rgb followed by numbers for red, green, and blue values. You might have to allow the gears of the Internet to churn for a minute or two, but you should eventually see your LED turn on. If you don't feel like waiting, go ahead and click on the refresh-looking icon in the IFTTT dashboard for your recipe, named "Check Recipe now".

Particle.function is a function specifically made for communication with IFTTT. It works as Particle.function("cloudNickname", firmwareFunctionName). The cloud name can be maximum 12 characters long. There's a great write up for this provided by Particle.io, click HERE.

Manipulating groups of words and symbols, or 'strings' is a key component in many programs - so much so that Particle has a String 'class' - which allows us to use several different pre-built methods for dealing with strings. In fact, use four of them just in this exercise: length(), indexOf(), substring(), and toInt(). More info on these and other useful methods for strings can be found in the Particle docs here.

You may have noticed by now that there is no LED on your breadboard. Instead, we're going to take control of the RGB LED on the Photon RedBoard that's usually reserved for showing the status of the board. We do this by using the built-in RGB library and setting control to us, the user.

Push buttons like the ones we're using operate by closing or opening a circuit when you push down the button. The Photon can detect this change and report it to us so we know when someone pushes our buttons. Often, buttons are hooked up to the breadboard with a 'pull-up' resistor (usually 10KΩ) which in essence pulls the voltage reading from the button to HIGH. This means that when we push the button the value goes LOW, which seems to make sense to us logically. Luckily for us, the Photon has internal pull-up resistors that we can turn on through the code - by changing the pinMode type from the usual INPUT to INPUT_PULLUP.