You got your first taste of processing digital input in Exercise 4 by working with a push button. This experiment introduces a Single-Pole, Double-Throw (SPDT) switch. You'll see how the Johnny-Five Switch class can be used with a variety of physical switches, including a magnetic switch that you can use to protect your lunch from marauding fridge raiders. This experiment also includes the integration of a third-party module and service, Twilio, which you can use to send SMS text messages — now that's leveling up!

The following tutorial provides in-depth background on some of the hardware concepts in this experiment:

Simple SPDT slide switch. Rated at 30V/200mA. The pins have .1" spacing - fits great into a breadboard! Use it as a power swi… 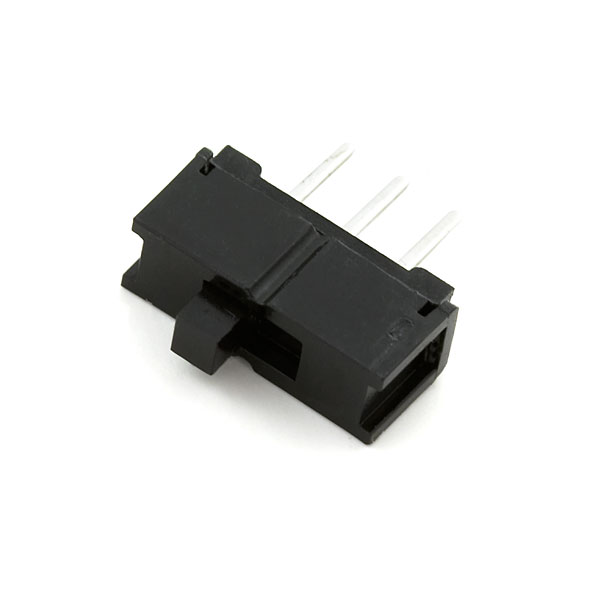 Note: The circuit in this experiment doesn't need a pull-down or pull-up resistor like the one in Experiment 4. That's because the common pin in the switch is always connected to something. There's never a "disconnected" state that can cause floating. There's a nice tutorial about pull resistors if you'd like to learn more.

This experiment has two wiring diagrams, but let's not get ahead of ourselves! The first is below: 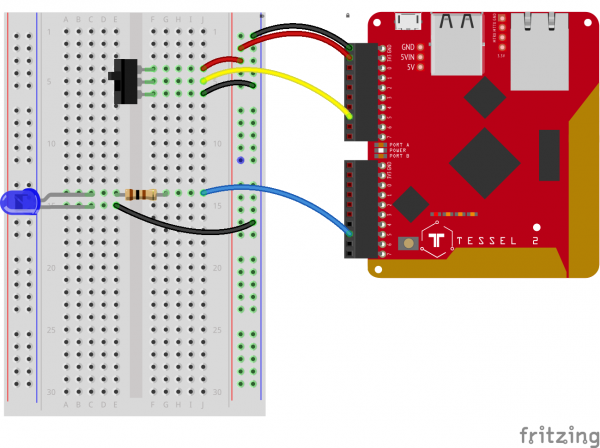 Observing a Switch With Johnny-Five

Open your favorite code editor, create a file called switch.js and save it in the j5ik/ directory. Type — or copy and paste — the following JavaScript code into your switch.js file:

Note: The minimum version of Node.js that runs on Tessel 2 supports many ES2015 features, including Arrow Functions, which we will be using throughout this experiment to simplify your program code.

When you slide the switch back and forth, your terminal will display the appropriate message:

As in all previous experiments, once the board object has emitted the ready event, we can initialize an instance of the Switch class to interact with our hardware:

Next, create two event listeners: one for the close event (which means the switch is "on") and one for the open event (the switch is "off"). These events are conceptually very similar to the Button events that we covered in Experiment 4. Buttons are, after all, a kind of switch too.

And that's it! Flipping the switch back and forth will cause Switch closed and Switch opened messages to display in the console (your terminal window's output).

Variation: Using a Switch to Control an LED with Johnny-Five

As a minor modification, create a new Led object and control its on/off state with the Switch. Type — or copy and paste — the following JavaScript code into your switch.js file:

Just as we did in all previous experiments, once the board object has emitted the ready event, we can initialize instances of the Led and Switch classes to interact with our hardware:

This time, instead of logging (displaying) messages, the Switch event handlers will turn the LED on or off, depending on which state the circuit is in:

Monitoring a Fridge With Johnny-Five

Ever had a pesky coworker who has a habit of swiping your lunch? Let's try to catch her in the act! For this experiment, you're going to make a surveillance device that will send us an SMS text message when a refrigerator door is opened.

In Experiment 4 and the first example in this experiment, you built circuits containing switches controlled by direct human contact: fingers pressing or flipping. The door switch included in the Johnny-Five Inventor's Kit is a little different: it is sensitive to a magnetic field.

This type of two-piece switch is often used in home-security systems. One half of the switch is attached to a fixed surface, and the other half to a moving door or window. When the door or window is opened, the two halves are separated from each other, breaking the contact and changing the switch's state. 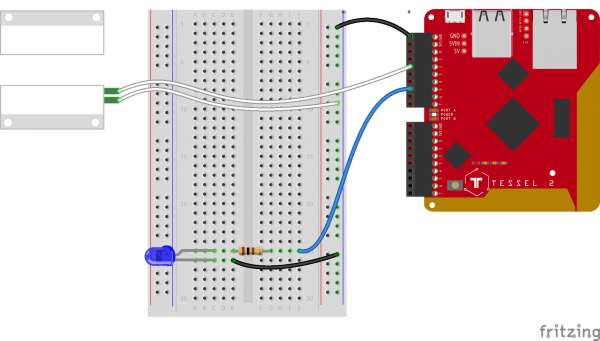 Before we start sending SMS messages out into the ether, let's use the circuit above to create a prototype. This will prove our hardware is set up correctly. For the moment, instead of dispatching a text message, we'll indicate the switch's status with an LED. We'll turn the LED on when the "door opens" (switch halves are separated) and shut it off when the "door closes" (switch halves are near or touching).

Type — or copy and paste — the following command into your terminal:

Opening and closing the magnet switch will turn the LED on and off, respectively.

There's a small difference in how the Switch object is instantiated in this code example, compared with the SPDT example:

In this case, we're telling Johnny-Five to invert the switch, logically.

Consider the default state of the circuit in the SPDT example above and the pushbutton examples in Experiment 4. In those, when the switches are in their "off" position (or the button is not pressed), the associated digital input pin will read LOW.

Now, scroll back up and look at the wiring diagram image again for the magnetic door switch circuit. It would seem that when the two halves of the switch assembly are apart as shown, the circuit would be open and the digital pin would read LOW, like the earlier switch and button examples.

However, the internal wiring of this particular magnetic door switch works in such a way that the pin will read HIGH. When a switch or component has this kind of architecture, we say that it is pulled high—the circuit's default, inactive state is HIGH rather than LOW.

The invert option tells Johnny-Five to invert its interpretation of the Switch's states, such that HIGH reads correspond to the open event and LOW reads to the closed event. That way, pulling the two halves of the switch apart results in "open" and putting them together again is "closed," which feels correct.

Note: Unless you pass a particular value for the type property, a Switch object instance will default to invert: true, so the behavior remains the same if you remove the invert:true from the code here.

In order to enable SMS (text messaging), you'll need to set up a trial account with Twilio: 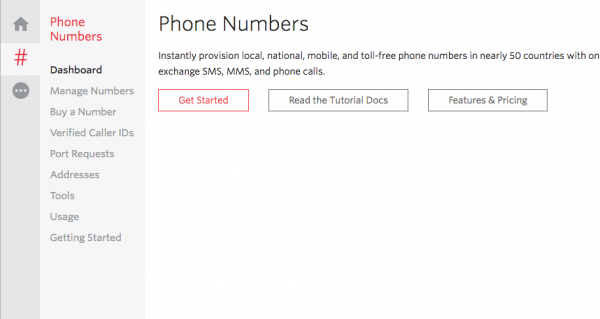 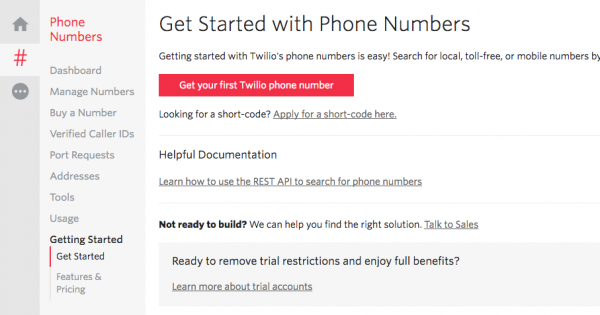 Twilio maintains an npm module that you can use. Install the Twilio module for Node.js by typing — or copying and pasting — the following command into your terminal:

Type — or copy and paste — the following JavaScript code into your intruder-alert.js file:

When you remove the magnet, you should momentarily receive a text message warning you of an intruder!

The script instantiates a Twilio client object with the defined credentials. That object takes care of communicating back and forth with Twilio.

After the board is ready, a Switch is instantiated, just like before. But there is a change to the open event handler. When the door is opened:

The details object sets up a body for the text message (using a template literal and the JavaScript Date object), as well as sender and recipient phone numbers.

Then we rely on the Twilio client object for dispatching the message, invoking client.messages.create with the details object and also a callback function. If there is an error (the first argument to the callback function if so), log it to the console. Otherwise, we're good—the message was sent successfully.