In this experiment, you'll use the SparkFun soil moisture sensor to alert you when your plants are getting sad and need a bit of water to cheer up.

Remember Experiment 6? In that experiment, you built a voltage divider circuit to read light intensity data as voltage from a photoresistor. Good news: the SparkFun moisture sensor has an on-board voltage divider—it does that part for you. All you need to do is power it and read the analog values coming from its signal (third) pin. When the soil is getting dry, we'll turn on a yellow LED to warn you. Moist and good? Then we'll turn on a blue LED.

Introduction to the Soil Moisture Sensor 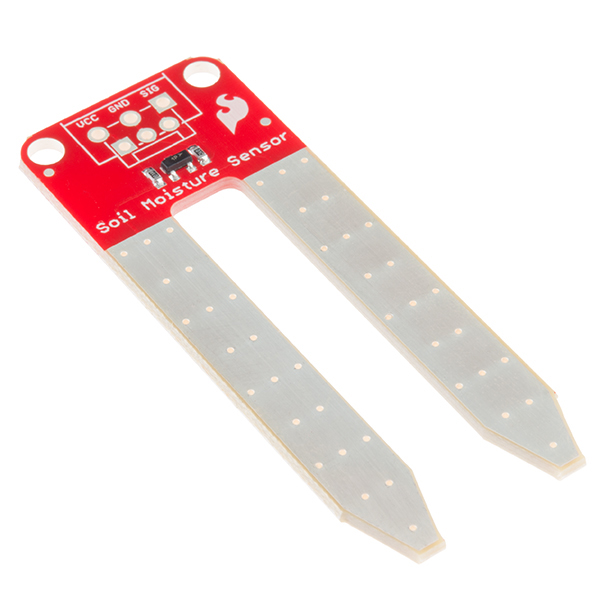 The SparkFun Soil Moisture Sensor is a simple breakout board for measuring the moisture in soil and similar materials. The soil moisture sensor is straightforward to use. The two large exposed pads function as probes for the sensor, together acting as a variable resistor. The more water that is in the soil, the better the conductivity between the pads will be, which will result in a lower resistance and a higher SIG (output voltage).

To get the SparkFun Soil Moisture Sensor functioning, all you need to do is connect the VCC and GND pins to your Tessel 2. You will receive a SIG out, which will depend on the amount of water in the soil. Oh, and you'll also need a bit of dirt in a pot to test it all out!

One commonly known issue with soil moisture sensors is their short lifespan when exposed to a moist environment. To combat this, we've had the PCB coated in Gold Finishing (ENIG, or Electroless Nickel Immersion Gold).

Let's get this circuit wired up! Your plants are waiting to tell you if they are thirsty or not. 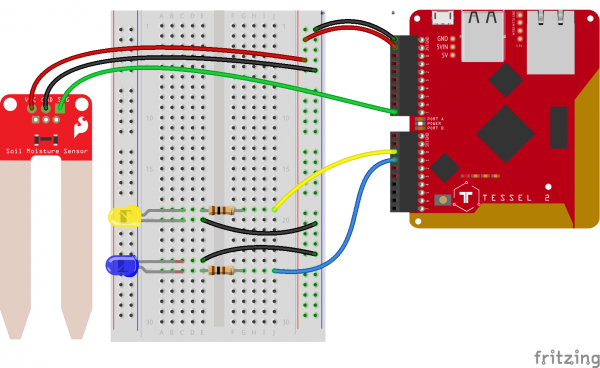 Having a hard time seeing the circuit? Click on the wiring diagram for a closer look.
Note: The headers on the soil sensor are a screw-terminal type. You'll need a small (jewelry- or electronics-sized) flat screwdriver. If you don't have one on hand, you can probably still get the jumper wires into the header slots, but they won't be as secure.

Open your favorite code editor, create a file called moisture.js and save it in the j5ik/ directory. Type—or copy and paste—the following JavaScript code into your moisture.js file:

Put some dry soil into two small containers (paper cups would work great). Pour some water into the soil in one of the containers so that it is nicely damp but not saturated.

Note: No soil on hand? The soil sensor will also react to the moisture content of other materials, like coffee grounds.

Move the soil sensor between the dry and wet soil samples to see the LEDs light up.

Once the board object has emitted the ready event, the program initializes the instance objects that will be used to observe the sensor and output a state based on its condition. For that, you'll create two Led objects, an Leds collection object that contains those Led objects, and a Sensor object for the soil sensor.

Set the "dry" condition indicator LED to be on by default—don't worry; this program will right itself even if the sensor is initially in a "damp" or "wet" condition.

The last major piece of program initialization is the Sensor's change event handler. This code indicates that the program wants to be informed whenever the soil Sensor reading changes:

Within the "change" handler, the program will determine which indicator LED should be on, based on the value of the sensor:

The logic above can be written and reasoned about in a narrative form:

These predicate conditions ensure that the indicators do not toggle on and off wildly as each change event is received. This could happen because analog input sensors are generally very noisy.