SIK Experiment Guide for the Arduino 101/Genuino 101 Board

In Experiment 13, you played around with using different inputs to control a motor's speed and direction. In this experiment you will do something similar but use the on-board accelerometer on the Arduino 101 board as an input.

The accelerometer measures gravitational forces being applied to the sensor in different directions. You can extrapolate a lot of information from accelerometer data if it is being moved around. But it is also handy for figuring out which way is down when it is sitting still! Earth's gravity is an ever-present force that can be measured by the accelerometer. We will use it in this way to determine the orientation of your Arduino 101 board, and from there have your motor drive forward, backward or do nothing. Lets get to it!

Didn't Get the SIK?

If you are conducting this experiment and didn't get the SIK, we suggest using these parts:

You will also need either an Arduino 101 OR Genuino 101 board.

Before continuing with this experiment, we recommend you be familiar with the concepts in the following tutorials: 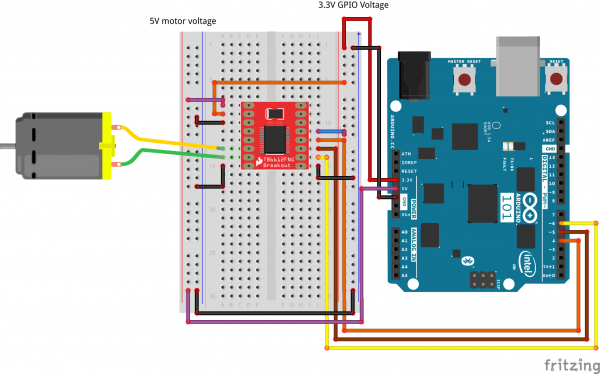 Open the Arduino IDE software on your computer. Coding in the Arduino language will control your circuit. Open the code for Circuit 18 by accessing the “101 SIK Guide Code” you downloaded and placed into your “Examples” folder earlier.

The Arduino's serial port can be used to receive as well as send data. Because data could arrive at any time, the Arduino 101 board stores, or "buffers," data coming into the port until you're ready to use it. The Serial.available() command returns the number of characters that the port has received, but haven't been used by your sketch yet. Zero means no data has arrived.

We read the accelerometer value by passing the constant of X_AXIS to the readAccelerometer method of the CurieIMU. This will return the real time reading from the sensor. To read other Axis you can pass it the constants of X_AXIS, Y_AXIS and Z_AXIS.

In this experiment we are not necessarily interested in the positive or negative values. We just want to know which ones are the largest, and we can make a decision from there. We used the 'abs()' function which takes the absolute value of a number (basically removes the (-) sign). We store that in a local variable called 'absX' so that if we ever want to access the raw x value, we can still do that.

Once we have the accelerometer readings in absolute value, we can compare them using an if() statement. In this example we are only looking to compare the values that have to do with tipping the board to the left and right, but it still takes all three axes to figure that out. For example, if Y is greater than X, the Y axis is pointed down (pointed at the direction of gravity). We then do a final comparison to see if it's greater than 0 to make sure it is in the positive direction. We set the direction of the motor based on those comparisons. 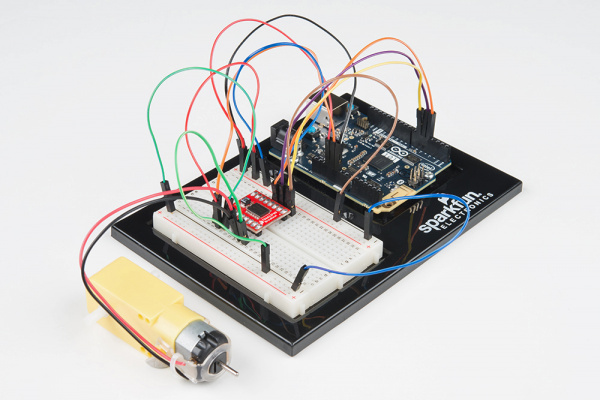 Make sure you have the motor controller wired up correctly. That is a lot of wires!

Double check that your code uploaded to your 101. Sometimes it takes awhile to upload to the 101 board, so be patient!

Sometimes the Arduino will disconnect from the computer. Try unplugging and then replugging it into your USB port.