Notice: This tutorial was written with Raspbian version "June 2019", Python version 3.7.3, and pip 19.1.1 for Python v3.7. Other versions may affect how some of the steps in this guide are performed.

Python is a great language, we actually have a great tutorial on getting started with Python programming on a Raspberry Pi that covers everything from picking an editor and getting the code to run, to syntax and error messages. I highly recommend reading it if you plan on writing your own code. If you just plan on running the example code and maybe making a few changes, we'll go through a few basic things here.

There are also 2 commonly used Python versions. Even after Python 3 came out many people continued to use 2.7 for many years. Part of the reason is that Python 3 improved on some things and in the process made it not backwards compatible. For our example we will be using Python 3.7 (and the code will not run on 2.7). To see what version of Python your Pi is using, open a command line and type each of the following commands individually to check.

If you are not using Python 3, then we'll need to open the *.bashrc file and add an alias. 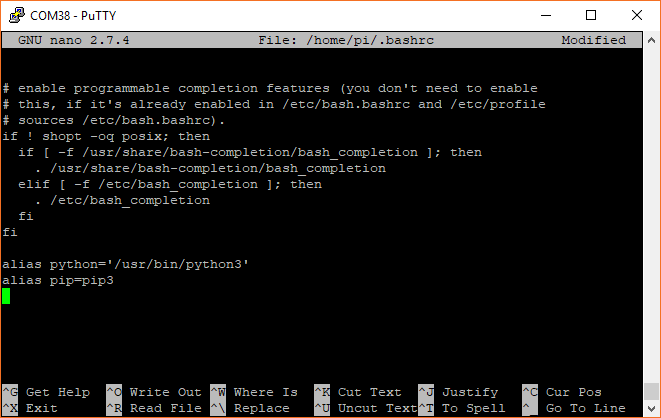 To exit nano type CTRL + X and then hit Y when it asks you if you want to save and then ENTER. You can now either reboot or type the following to force the Pi to run the */.bashrc file again.