The bulk of this tutorial focuses on controlling hardware connected to the Raspberry Pi. To accomplish that, we will be using the Python programming language. As such, you should be familiar with some of the basics of Python, including literals, variables, operators, control flow, scope, and data structures. Depending on your comfort level with Python, we recommend the following:

Since we don't want to reinvent the wheel (there are many great tutorials and books out there on Python!), we will be referencing two texts:

Note: Some of the links for "A Byte of Python" might not open to the correct location on the page for some browsers. If this happens, just refresh the page to take you there.
Try it! Each of the code examples given can be run as separate programs. Try typing them out into the interpreter or copying them into a file (one example at a time) and running them with Python!

If you would like additional help with programming in Python (more examples and exercises) than what's provided here, check out the following free sites: Non-Programmer's Tutorial for Python 3, learnpython.org, and Google's Python Class. After covering the basics of the Python language in this section, we're going to dive into flashing lights, reading sensors, and controlling motors!

A comment is any text to the right of the pound (or hash) symbol #. The Python interpreter ignores this text, and it can be useful for writing notes to yourself or other programmers about what's going on in the code.

Challenge: Change the print("Hello, World!") program we wrote earlier so that it prints out your name.

Variables are containers whose values can change. We can store a number or string in a variable and then retrieve that value later.

Challenge: Store your name in a variable and then print that variable's value to the terminal.

So far, we've been writing one expression per line in our program. For example:

You can combine these two lines into one line by separating them with a semicolon ;:

These two programs will execute in exactly the same fashion. That being said, it's often recommended that you write programs with one logical line per physical line to make your code easier to read.

You can ask a user to enter information into the terminal by using the input() function. This will prompt the user to type out some text (including numbers) and then press enter to submit the text. Upon submission, the input() function will read the text and then return it as a string, which can be stored in a variable.

Whatever is in between the parentheses (known as arguments) will be printed to the screen prior to accepting user input.

Functions are sections of code that can be called by name. For example, print() is a function that takes the arguments and prints it out to the terminal. Notice in the example below that we separated two different arguments in print() by a comma. In this case, print() will print the different strings (or variables) in order on one line.

Note that you can use the int() function to turn a string into an integer (assuming the string is an integer). 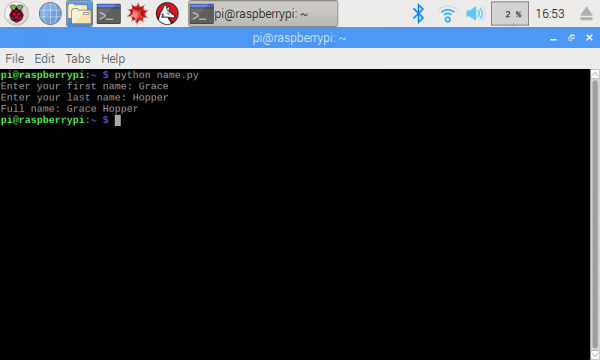 White space (number of spaces) at the beginning of a line is important in Python. Statements that form a group together must have the same level of indentation (amount of white space in front of the line). This will be important when we get into control flow statements (e.g. if, for) and functions.

if statements will be covered later, but note how the print() functions are indented, and thus form separate code groups underneath if and else statements.

An operator is a symbol that tells the interpreter to perform some mathematical, relational, or logical operation on one or more pieces of data and return the result.

Logical operators compare two numbers and returns one of the Boolean values: True or False.

Bitwise operators perform binary operations on the bits (1s and 0s) of the given numbers. This tutorial talks more about binary and bitwise operations.

Challenge: Ask the user for two integers, and print the addition, subtraction, multiplication, division, and modulo of those numbers. For example, if you enter the numbers 6 and 7, the output should look like:

The Python interpreter executes statements in your code from the top to the bottom of the file, in sequential order. That is unless, of course, we employ some time of control flow statements to break this normal sequential flow.

We introduce the range(x, y) function in the examples below, which generates a list of numbers between the first number, x (inclusive), and the second number, y (exclusive).

Challenge: Write a program that prints integers counting up from 1 to 20, except that for every multiple of 3 (3, 6, 9, etc.), the word "fizz" is printed instead. The output should look like the following: 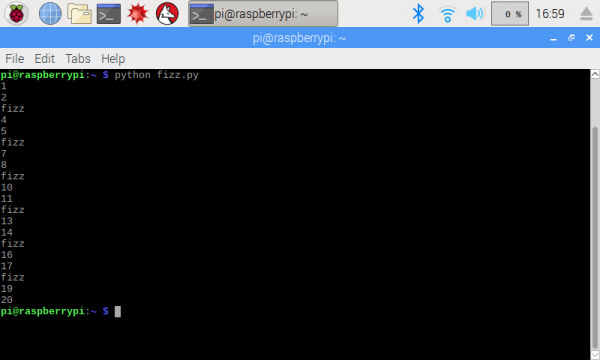 Functions allow you to name a block of code and then reuse that code by calling its name. You can pass data to a function through variables known as parameters (note that the variables in the function definition are called parameters whereas the actual data itself being passed are known as arguments). Data can also be passed back to the calling statement using the return statement.

An example of a function definition would look like:

You can call this function elsewhere in your code with functionName(argument1, argument2).

Note that variables declared inside the function definition are known as having local scope. This means that they cannot be accessed outside of that function. Variables declared at the top level of the program (i.e. outside any functions, loops, or classes) are known as having global scope and can be accessed anywhere in the program (including inside functions).

Important: Any functions you create must be defined before you use them! If you try to call a function higher up in the code (before its def definition), you'll likely get an error such as:

Python has a number of built-in functions that can help you (we've already seen three: print(), int(), and range()). A list of these functions can be found in the Python Tutorial.

Challenge: Starting with the code below, implement the sumTo() function that takes an integer as a parameter (n), sums all the whole numbers from 1 to n (including n), and returns the sum. You may assume that the input, n, will always be a positive whole number (do not worry about handling negative numbers).

We have not talked about objects yet, but in reality, you've been using them all along. The secret to Python is that everything is an object. That's right: everything, including functions and integers.

An object is simply a collection of data stored somewhere in your computer's memory. What makes an object special in a programming language is the ability for it to store information and perform actions. We've already seen an object's ability to store data (for example, a = 3 means that a is an integer object and stores the information 3). But how do we get an object to perform an action?

Objects are given a set of functions as defined by their class, which acts as a blueprint--telling the objects what they can and can't do or information it can and can't hold. When we talk about functions within a class (or objects), we call them methods.

Note that we can't use an integer as a float! For example, if we said c = 8, then c is an integer, not a float! If c is an integer, there is no .is_integer() method in integers, so calling c.is_intger() would fail (and throw an interpreter error). Try it! To force an integer value to be a floating point number, we simply add .0 after it (just like we did with a = 3.0).

Challenge: Modify the code below so that the phrase stored in my_string is converted to all lower case letters and printed to the terminal. Hint: review the String Methods in the Python Reference Guide to find a built-in method to do this for you.

In addition to variables and objects, Python has four other ways to store data: list, tuple, dictionary, set. These structures hold a collection of related data, and each of them has a slightly different way of interacting with it.

Challenge: Starting with the code below, implement the average() function to compute the average of the numbers given to it in list form. Hint: you will probably want to use the len() function.

Modules are another way to reuse code and help you organize your program. They are simply files that are imported into your main program. After importing a module, you can use a module in much the same way you would an object: access constants and functions using the dot-notation.

Save the following file as stringmod.py:

In the same folder as stringmod.py, run the following code (either in the interpreter or saved as a file):

Challenge: Python comes with several standard modules that you can import into your program. One of them is the math module, which you can use with import math. Use the constants and functions found in the math module to perform the following actions:

Programs almost never work right away, so don't sweat it! The art and science of finding and fixing problems in your code is known as debugging. The most helpful debugging tool is the standard Python output. If there is a problem with your code, it will likely tell you where the error is and what's wrong with it.

For example, let's take the following code snippet. In it, we forget to indent our code underneath our for loop.

If you run this code, you'll see that the Python interpreter is super helpful by saying it was looking for an indented piece of code around line 4.

Here's another example. Can you spot the error?

We forgot the colon after the for loop! The interpreter will let us know by telling us:

"Invalid syntax" is a little vague, but it tells you to look around line 3 for something that might be wrong, such as a missing colon, too many parentheses, a single quote instead of a double quote, etc.

What happens if your code runs, but it doesn't output the value(s) you expect? This is on you, the programmer, to find and fix! Adding print() statements throughout your code can help you identify where something might have went wrong.

Why don't you see "end" appear in the terminal? To help diagnose this problem, we can add a print() statement to see what's going on:

When we run this, we see the values of i printed in order. 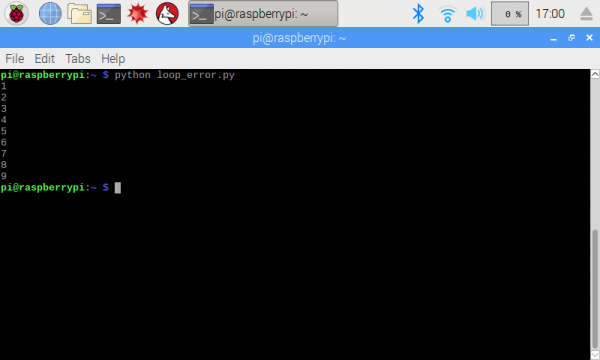 A-ha! It turns out that i never reaches 10. That's because the second number in the range() function is exclusive. If we need it to count to 10, then we should change it to:

Thanks for the help, print()!

Challenge: Find the 7 errors in the program below. When you fix the errors and run it, it should print numbers from 1 to the first argument, replacing multiples of the second argument with the word "buzz".

Here is the program running successfully: 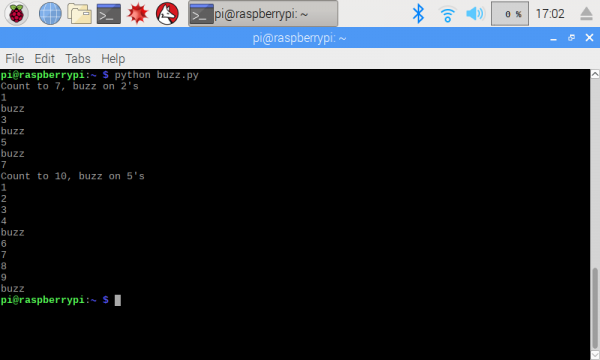