Many sensors out there use an analog voltage to convey their measurement data. For example, photocells change their resistance depending on how much light is falling on the sensor. By using a voltage divider in our circuit, we can effectively measure the amount of ambient light by measuring a voltage.

The bad news is that our Raspberry Pi does not come with any way to measure an analog voltage. To do that, we'll need to rely on a separate piece of circuitry: an analog-to-digital converter (ADC). Specifically, we'll be using the Microchip MCP3002, which is a niftly little chip that can measure up to 2 analog voltages on separate channels and report their values over the Serial Peripheral Interface (SPI) interface.

We'll use the built-in spidev module in Python to send commands and read replies on the SPI bus.

Refer to the Raspberry Pi Pinout section in the previous example if you would like to see what pins and GPIO labels belong to each of these connections. 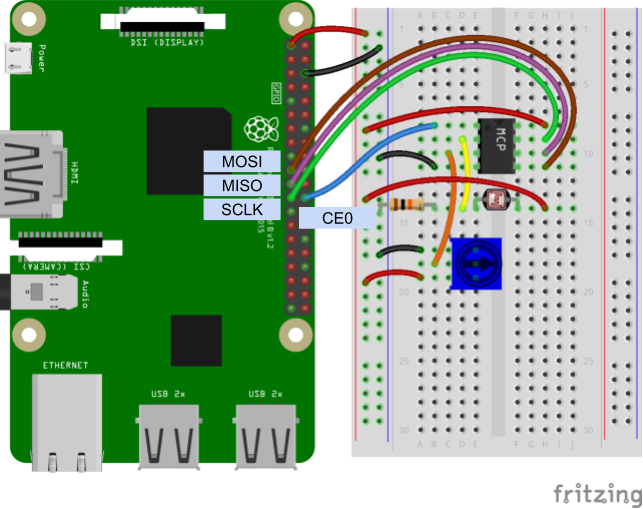 Note: Pay close attention to how the MCP3002 is oriented. You should see a notch in the top surface of the chip. With the notch oriented up, pin 1 is down and to the left of the notch. 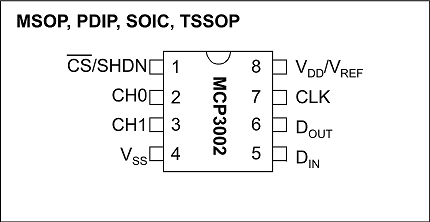 Pinout from the MCP3002 datasheet

Depending on your version of Raspbian, you may or may not have to install the spidev package (e.g. Raspbian Lite does not come with some Python packages pre-installed). In a terminal, enter the following: 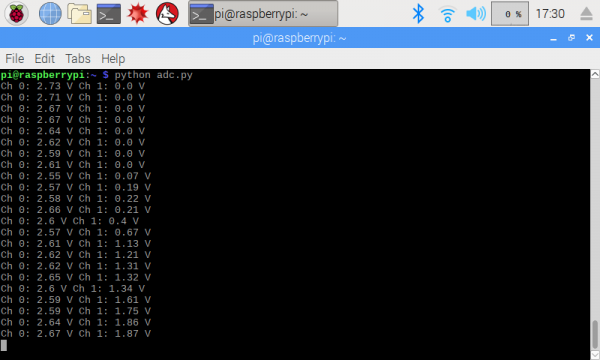 We are using SPI channel 0 on the Raspberry Pi when we initialize the SpiDev object:

Channel 0 corresponds to using CE0 (chip enable 0) on the Pi's pins. If you wanted to use another device on the SPI bus, you would need to connect it to CE1 and use SpiDev channel 1 as well.

We construct our SPI message by manipulating individual bits. We start with binary 11 (which is the decimal number 3) by using the prefix '0b':

If you look at section 5 in the MCP3002 datasheet, you will see that we need to send a 1 to start transmission, followed by another 1 to denote that we want "single ended mode." After that, we select our channel with a 0 (for channel 0) or a 1 (for channel 1). Then, we send a 0 to show that we want data returned to us with the least significant bit (LSB) sent first.

Finally, we send another twelve 0s. What we send here really doesn't matter, as we just need to send clock pulses to the MCP3002 so that it sends data back to us over the Dout (MISO) line. This data (4 setup bits followed by twelve 0s) is stored in a list.

We store the data returned to us in the reply variable, and it comes to us as a list of 2 bytes (stored as 2 integers). Note that we send out data and read the reply at the same time when using SPI:

From there, we construct a single integer out of the two bytes (8 bits) by shifting the first over to the left by 8 bits and then adding the second byte to it. The last bit we read in is extraneous (not part of the ADC's return value) so we shift the answer to the right by one bit.

Once we get the percentage of Vref with val / 1024, we multiply that percentage by our Vref, which we know is 3.3V in the case of our Raspberry Pi.

And that's how we get our analog voltage reading! If all this is confusing, you can simple copy the Enable SPI portion and read_adc() function into your own code. Then, just call read_adc(0) to get the voltage at CH0 on the MCP3002.

One last interesting bit of code is the idea of default parameters. If you take a look at the read_adc() definition:

You'll see that there are actually two parameters: adc_ch and vref. When you call this function, you are required to give it a channel number (0 or 1). However, you can optionally send it an argument with the Vref value. On most cases with the Raspberry Pi, the voltage will be 3.3V. If you use another voltage (e.g. 5V), then you can change the math so that the ADC gives you a more accurate reading.

You have the option of calling this function with another Vref (e.g. 5) using either read_adc(0, 5) or by explicitly naming the vref parameter read_adc(0, vref=5). However, because we know that we've connected 3.3V to the MCP3002, we can simply call read_adc(0) and know that the function will rely on its default parameter of vref=3.3 when doing its calculations. 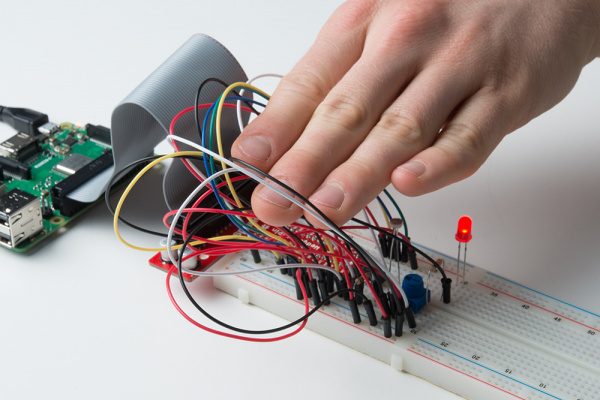