Computers are great at doing math and automating boring tasks, but everyone knows that their true purpose is to play games. Let's create a game on the Digital Sandbox! But in order to control the game we need to add input.

Up to this point, our Digital Sandbox experience has been very one-sided. Output to tiny yellow LEDs. Output to larger white LEDs. Output to RGB LEDs. Change the fade value of the output. Output, output, output. Let's flip the tables on the Sandbox, and send some input to the board!

Inputs are signals or values sent into a system. Some of the most common inputting components are buttons or switches. Buttons on a keyboard are an input to your computer because they send data into that system.

if statements are critical when assessing the status of an input and taking an action based on it - if button A is pressed, then print an "a." We can take the if statement a step further by adding an else condition, which allows us to control what happens if the if statement evaluates to false. So now we can say something like "if the egg floats, throw it away, otherwise (else) fry it and eat it!" 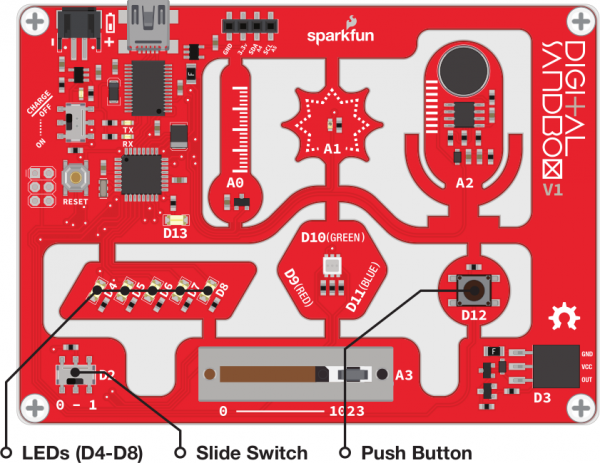 This time we introduce a new function, plus a riff on the if statement.

There's just one parameter to the digitalRead() function -- a pin that you want to read. Make sure to set the pin as an INPUT, using the pinMode() function, before you read it!

This function is different from the others because it returns a value. Instead of just writing out the function call and skipping to the next line, we actually have to use the digitalRead() function in conjunction with other bits of code.

The digitalRead() function will come back with one of two values: HIGH or LOW. You can use that return value as part of a conditional test in an if statement, for example:

Or, if you so pleased, you could store the value of the digitalRead() function inside a variable, like this:

We'll use an extension of the if statement this time: the if...else statement. if/else allows us to take one action if the condition is true and a different action if it's false.

Here's the anatomy of an if/else:

if/else is really handy when you're dealing with digital outputs which can only be in one of two states. If a button is pressed, do something, otherwise do something else.

If you're ever creating a conditional statement, make sure you use the equivalence operator if you're asking if two values are equal.

Here's the sketch. It's a big one! Check out the comments for a line-by-line explanation. This is the Sandbox_08_Reaction_Tester.ino sketch.

Can you guess what will happen in each of the pin 12 test cases? Upload the sketch to your board to find out!

This is a very simple game. Pick a number between four and eight, and try to make the LED stop on that number by pressing the button. To switch between easy and hard mode, move the switch from 0 to 1. Can you make it stop in the middle on hard mode?