In this experiment we explore the subject of pins -- the manipulators of the Sandbox. Each LED (as well as the other inputs and outputs on the Digital Sandbox) is connected to a specific pin on the Sandbox's microcontroller.

Pins are all uniquely numbered, and each input or output component on the Sandbox is labeled with the pin number it's connected to -- that's the D2, D4, D11, A1, etc. lettering next to each LED, switch and sensor.

Every pin can be separately controlled; for instance pin 4 can be set HIGH at the same time pin 5 is set LOW. Some pins (as we'll later discover) have special powers, but every pin is at least able to accomplish digital input and output. 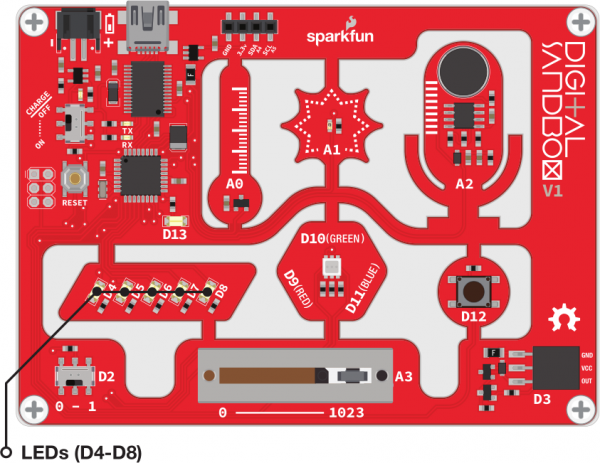 Just one new function to introduce here. We kind of cheated last time by not using it, so we'll use it five times in this experiment.

Every pin on an Arduino can be used as either an input or output, and one of your jobs is telling it which pin is which. To tell an Arduino what a pin's job is, you use the pinMode() function.

pinMode() takes two parameters inside its parenthesis. The first value is the pin that you want to set as an input or output. The second parameter is the mode, which can be either INPUT or OUTPUT. That's case-sensitive, those mode values need to be all caps!

Usually you'll stick your pinMode() declarations at the top of your sketch, in the setup() function. It only needs to run once, at the very start of your program, the pin will be set up that way for the rest of the sketch's run.

Here's our sketch, upload away! This is the Sandbox_02_MultiBlink.ino sketch.

Notice how each of our pinMode() declarations occur in the setup() function. Then the loop() is used to write each of those LEDs either HIGH or LOW.