In this experiment we'll use the Sandbox's on-board microphone to measure volume levels and display them on the LEDs. The microphone produces a sound wave, which is just another analog voltage that we can measure. The louder the sound, the higher the amplitude of the wave and the larger the voltage.

Without a lot of complicated math and filters, sound can be a difficult thing to measure and react to. Using the Sandbox for voice recognition isn't quite possible, but it can be programmed pick out high volumes as long as it can sample the microphone input fast enough. We can use the slide potentiometer to set the sensitivity of the display. 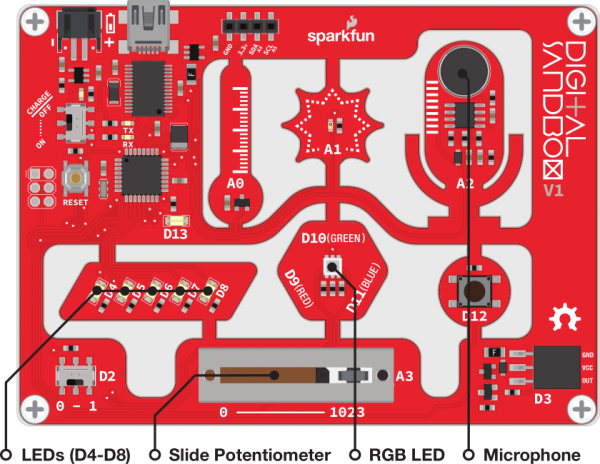 You're probably getting used to this now: time for more variable types! This time it's not so much a new variable type as a common storage space for variables.

Arrays are a group of variables all housed under a single variable name. Array syntax makes heavy use of the square brackets [ and ]. Here's an example of an array declaration:

You can also initialize your array, using curly brackets:

To reference a single variable in an array we use an index. Here's where the most confusing array-related thing comes into play: arrays are 0-indexed. That means, to access the first value in an array you put a 0 inside those square brackets. To access the last variable, you use an index of length_of_array - 1. For example:

Time to introduce your first real loop: the for loop. for loops are used to repeat a block of code for a specified set of repetitions. Instead of looping indefinitely, like the loop() function, the for loop can be controlled to repeat once, twice, thrice, or thousands of times. It's up to you.

Here's the anatomy of a for loop:

There are three important aspects to a for loop declaration:

Here's an example for loop that should run exactly five times:

The order of operations of this loop looks a little something like this:

In this case we'll exit the for loop after i increases to 5. We'll have run through it 5 times by then.

Arrays are the perfect partner for for loops. When you need to run through each variable in an array, you can place a variable in the index section, and for loop through each member of the array. We'll be doing just that in this experiment...

Here's the Sandbox_13_SoundDetecting.ino sketch. Read through the comments, they'll help re-inforce what you've just learned about array's and for loops.

Go ahead and upload the sketch, then make some noise at your Sandbox. Are the LEDs bouncing to your voice? If not, try tapping on the mic.

To adjust the sensitivity of the volume meter, move the slide pot up or down. With the slider set to the far right, it’ll take a really loud sound to make every LED turn on. But if you set the slider too low even the slightest noise will set the meter off.