DC motors are great for spinning an object at high speed with no regard for where it starts or stops. For many applications, though, it's important to precisely control the position of a motor. Wing flaps in a plane, steering mechanisms in RC cars, and robotic arm platforms are applications that benefit from motorized position control. For those applications we ditch the DC motor and whip out the servo!

A servo motor is like a DC motor with an internal controller and built-in sensors that help keep track of its shaft position. A servo motor knows, for example, if it's pointing at 15° or 115°.

Servos all have three wires that need connecting to: supply voltage, ground, and a signal. The voltage and ground connections supply the motor with power, and the control signal - a PWM output (surprise, surprise) - sets the position of the motor. Once the motor reaches the desired position, it stops until it is commanded to move to a new position.

Servo motors vary in their range of motion - the minimum and maximum angles they can point to. Only specialized, continuous rotation servos can rotate a full 360°; most have a stated range of motion between 90° and 180°. The servo we'll be using in this experiment has a 180° range of motion. 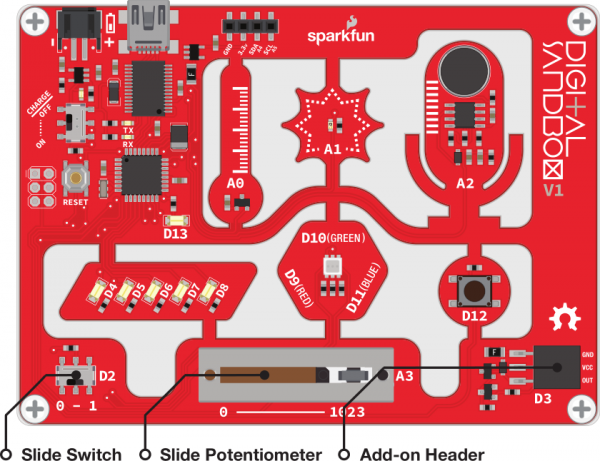 In the final experiment, we're introducing you to one of the most powerful aspects of Arduino: importing libraries. Libraries are code written by Arduino or members of the Arduino community which go beyond the basic Arduino core to add unique features.

In this case, we'll be using the Servo library, which includes all sorts of functions and data types to make controlling servo motors super-easy. To be able to use the Servo library, you first need to include it. That can be acheived with this statement, which should go at the very top of your code:

Once you've included the library, the next step is to create a Servo variable -- an object you'll refer to throughout your sketch to control the servo. Here's how we create a Servo object named myServo:

You'll usually want this line to go above the setup() function as well -- making it a global object. That way we can use it in both the setup() and loop() functions.

So far, so good. As with most everything, we need to initialize the servo. In this case, we need to attach a pin to it. Here's how we attach a servo to pin 3:

Notice how we're using the myServo object declared earlier. This line of code will usually go in the setup() function. Run it once, then it's attached for the rest of the program.

After executing that line, your Servo should immediately start spinning till it finds its position.

Here we go one more time! Upload the Sandbox_16_ServoSweeper.ino sketch and away you go.

After the code has been uploaded, connect the servo with the three pin male breakaway header to the Sandbox. Make sure the servo’s black wire (GND) is lined up to the GND pin on the Sandbox, as shown here: 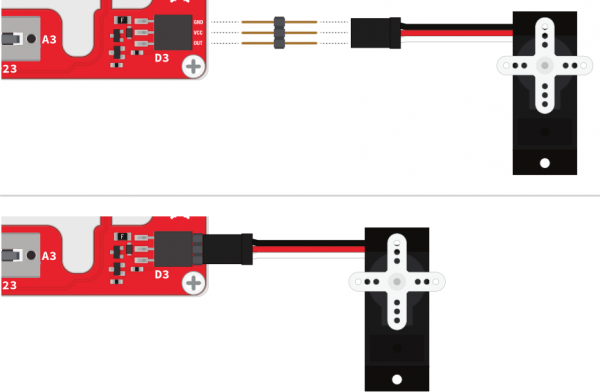