Digital inputs, like the button, only allow for two input values: HIGH or LOW. But what about the in-betweens? When you turn the volume up on your stereo, you're not forced to pick between mute and "OMG MY EARS." For volume control and other "finely-tuned" settings, we need analog inputs.

Analog inputs are components that put data into a system with a range of more than two values. On the Digital Sandbox, analog inputs can produce a value anywhere between zero and 1023 (1024 total values). The value produced by an analog input is proportional to the voltage it produces. If an analog component reads a value of zero, the voltage is 0V. If the output value is 1023, then the voltage is 5V. An analog reading of 512 is about 2.5V, and so on.

A special component inside the Sandbox's microcontroller called an analog-to-digital converter (ADC) is able to convert that range of input voltages to a discrete number. This is a special circuit that most pins on the Sandbox don't have. It's so special that the ADC pins are labeled with a preceding 'A'. The analog sensors on the board are labeled as "A0", "A1", "A2" and "A3."

Many electronic components produce analog output, the most common of which is a potentiometer. "Pots" come in a variety of shapes and sizes. Rotary pots are very commonly used to adjust the volume on a stereo. Slide potentiometers, like that on the bottom of the Sandbox, are often seen adjusting sound levels on mixing boards. 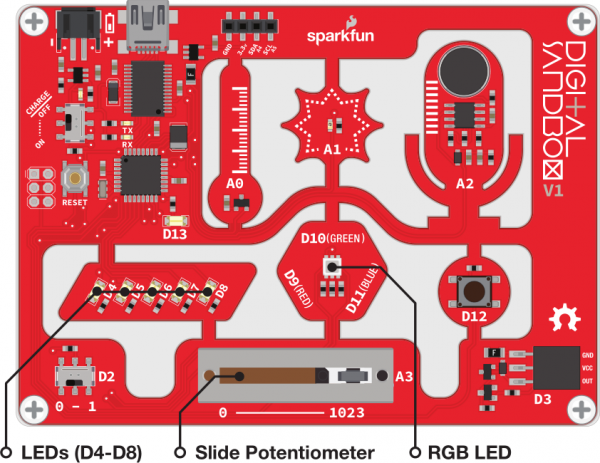 To read the value of an analog input we use the analogRead( [analog pin] ) function. Like digitalRead(), this function requires just a single parameter -- a pin to read.

That's where the similarities stop though. Unlike digitalRead() the only pins you can analogRead() on are those with a preceding 'A': A0, A1, A2, and A3.

You can store the return value of an analogRead() in a variable, and use it from there. For example, here's how we store the analog input of A0 into a variable:

Or you can use it directly, like in a comparison for example:

Don't forget to set your analog pin as an INPUT some time before you read it!

Here's the Sandbox_10_Analog_Slide.ino sketch. Upload away!

After uploading the sketch, open up the Serial Monitor. Numbers should begin to stream by. Try sliding the potentiometer, do the values change?