In this experiment we'll attach a speaker to the Sandbox, and turn it into a musical instrument! By using the light sensor to control our speaker's pitch, we can create a light-controlled theremin - a non-contact, electronic musical instrument.

By precisely modulating a pin, the Digital Sandbox can create electronic waves which, when routed through a loudspeaker, can produce a musical tone. We can program the Sandbox to control two characteristics of musical tone: pitch and duration.

A tone's pitch is what we perceive when we think of a note as being very high (screams, forks scratching plates, etc.) versus very low (like earth-rumbling bass). The pitch of a tone is very closely related to the frequency played through a speaker. If we toggle a pin from HIGH-to-LOW then LOW-to-HIGH 440 times per second, for example, it produces a 440 Hz (hertz) frequency - a "middle A" pitch. Humans can hear frequencies ranging from 20 (low-pitch, bass) to 20,000 Hz (high-pitch, "ow, my ears").

We can also program the duration of a tone - the length of time a pitch is played. In our program we'll use the delay function to set the duration. Playing a tone with the Sandbox is very easy. Just give it a pitch and it'll start toggling the output pin for you. Much like analog output, you can set it and forget it; the tone won't stop playing until you tell it to. 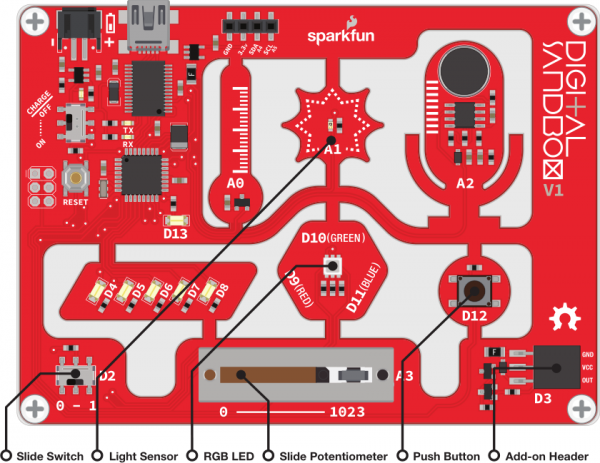 The tone function can be used to generate a sound wave and play it using an attached speaker or buzzer.

There are two parameters required to play a tone: a pin and a pitch. The pin should be set to whichever Arduino pin you have a buzzer connected to (don't forget to set it as an OUTPUT). The pitch should be set to the frequency of the tone you want to play.

As you'll quickly discover, the Sandbox isn't the most musical device out there. The tones it creates can be just a little-bit grating. If you ever need to halt a pin from playing a tone, use the noTone() function. You'll just need to specify which pin you want to noTone(), like this:

Arduino comes with all sorts of handy functions for manipulating variables, one of which is the map function. map translates a value from one range of values to another.

Here is the 'Sandbox_14_OptoTheremin.ino` sketch for this experiment. Read through the comments and upload away! 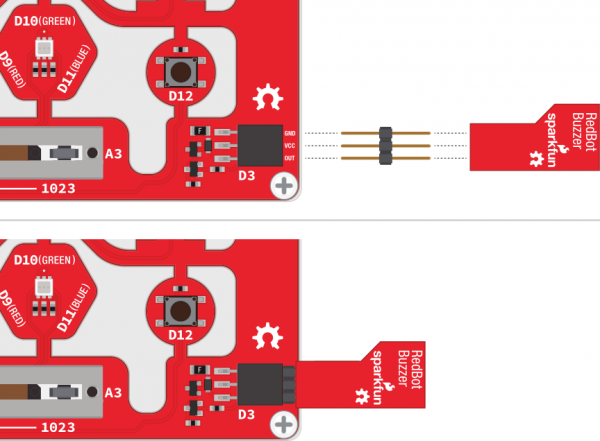 As fun as the opto-thermin may be, the sound is considered grating by some, so the code implements a simple ON/OFF function. Slide the switch over to the "1" position to turn the opto-theremin on.

Once the theremin is on, the speaker should start making noises. Try covering the light sensor; does the pitch change? We've turned the RGB LED white, so you can try to corral the light from that to control the light sensor.

You can adjust the duration of the tone by sliding the potentiometer. Slide the pot all the way to zero to get a really fast "zapper" sound, or slide to the right to create a soothing, slow sound.