The herky-jerky fading from experiment four accomplished the task, but just think of all the values we were missing! How do we make the LED fade smoothly? You can whip out 256 minutely different analogWrite() blocks, or you can reduce it to one, using variables.

Variables are like storage containers for numbers. We can put any number in a variable, and either recall it and put it to use, or manipulate it to change the value it stores. Anywhere you stick a literal number (like "0" or "255") you can instead use a variable.

There are a few rules when it comes to creating a variable. They can be any word, but they must begin with a letter, and they can't have spaces (use "_" instead). They are case sensitive, so a variable named "fade" isn't the same variable as "Fade." Try to keep variables short, but use descriptive words to keep your code legible. 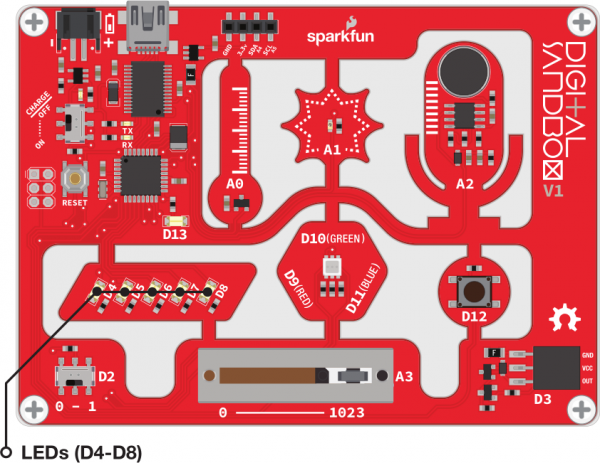 We've been slacking off on introducing new functions and syntax, so it's time to throw some new stuff at you! As you'll discover, there's a lot that goes into creating and using a variable.

In order to use a variable, you first have to declare it. There are two parts to a variable declaration: a name and a type.

There are a few hard-coded rules to variable naming: a name can't start with a number and it can't contain spaces or special characters. Variables can only be composed of 0-9, a-z, A-Z, and _. When you're picking out a name for a variable try to make it descriptive, that'll help to make your code easier to read and write.

A variable type determines the minimum and maximum values a variable can be. There's no such thing as infinity in an Arduino -- there are limits to how big a number can be. In this example we'll be using one of the more fundamental variable types out there: int. An int variable can be anywhere from -32768 to 32767 -- plenty of room for us to play with. (Those seemingly random numbers come from the fact that an int is a 16-bit signed value, which means the range is from 215 to 215-1.)

Once you've picked out your variable type and name, you can declare it like this:

That's it! Now you can store numbers in the example_variable variable, and even manipulate it with some math.

You can declare a variable anywhere in your code, but exactly where you declare it is actually really important, because every variable has scope. A variable's scope determines where it can be used and recalled. As a general rule of thumb, a variable can only be used within the curly bracket's ({ and }) that is was declared in -- that's its scope.

You can create a global variable by declaring your variable above setup(). Global variables can be used in both the setup() and loop() functions.

So, for example, if we want to assign the value 5 to our example_variable variable, this line of code will do:

But you can do so much more with variables than static value assignments. Variables are awesome because we can do math on them. You can add, subtract, multiply, or divide a variable with any one of these symbols:

You can use the Sandbox as a calculator, make it do some hard math with lines like this:

Parenthesis can be used, as they are in the above example, to define an order of operations. The stuff inside the parenthesis happens first, then multiplications and divisions, then additions and subtractions.

You're not limited to literal values on the right-hand side either! You can perform math on variables and store them into other variables. You can even perform math on a variable and store it in the same variable. For example, if I wanted to increase the value of example_variable by 1, this line of code would do:

In that case, if example_variable was 0, after running that line of code it would become 1.

Whew! That's a lot to read about variables. As you begin to use them, though, all of that information will start to become ingrained in your brain. Here's our sketch:

Copy the code above, or open the Sandbox_06_Storage_w_Variables.ino sketch. Upload away and keep an eye on the D5 LED. Much smoother!