We now have all the programming tools we need to make some totally awesome, interactive projects. Let's incorporate the light sensor - another analog input component - to create an automatic night light that turns on when it's dark.

The light sensor on the Digital Sandbox is called a photo-transistor. It produces an analog voltage relative to the amount of light it sees. The lower the analog value, the darker the environment. If you cover the sensor completely, you might get the output all the way down to zero. Shine a flashlight on it and you might get a maximized reading of 1023. 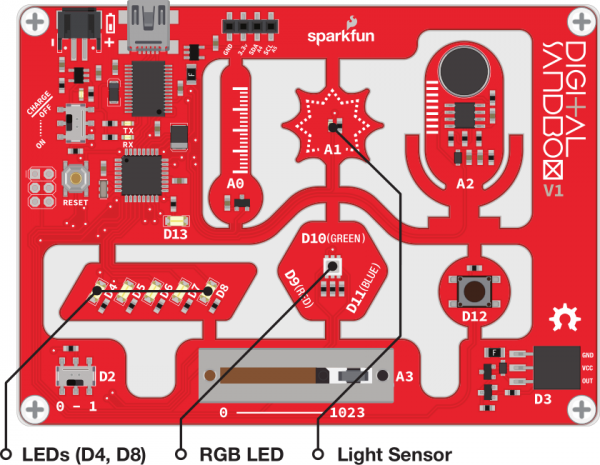 Nothing too major to introduce this time, but there is a new variable type!

It's good practice to assign const to any variable you never want to change. In our example, we have a constant darkness threshold that will never change, but may need to be adjusted between code uploads.

When you declare a constant variable, you're forced to assign it a variable right then-and-there. That means after the variable declaration, you have to add = something;. For example, here's how we create a const int variable and assign it the value 0:

You can initialize any variable, not just constants. Do it when you can. It can save you a line of code, or sometimes your sanity!

Here's our Sandbox_11_Automatic_NightLight.ino sketch. Check through the comments, then go ahead and upload it.

After uploading the sketch, try to cover the light sensor. Do the LEDs turn on? Do they turn back off once you uncover the sensor?

If the LEDs don't turn on as expected, check to see what value the photocell is reading by opening the Serial Monitor.

By default, we set the dark variable to 10. If the photocell is at or below that, the LEDs turn on, otherwise they'll stay off. Does that value need to go higher or lower for your night light to switch?