To use the SDK demo with an Arduino microcontroller connected to the fingerprint scanner, you need to:

Note: The available COM ports range from "COM3" to "COM10". If your USB-to-serial converter enumerates to a number higher than that, you would need to go to your computer's device manager to force it to a lower COM port number.

The image below shows the SDK_Demo before it is opened with an Arduino on COM7 and a baud of 9600 : 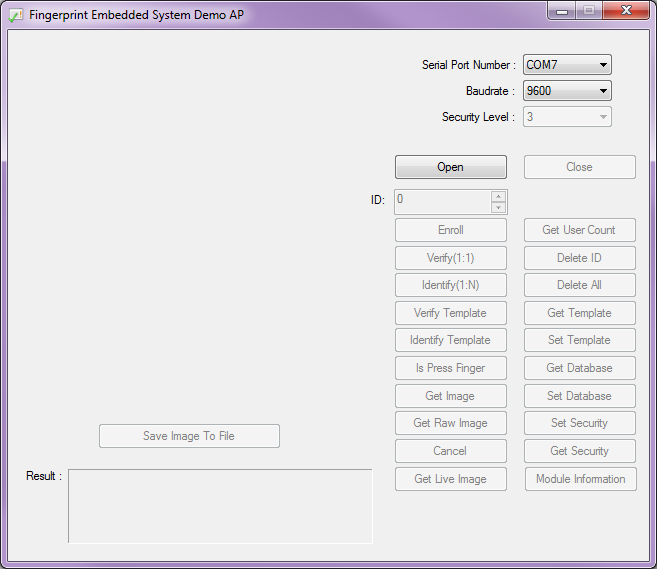 To create a standalone system that can read fingerprints without the aid of a computer, you will need to replicate what the demo software does in Arduino code. Luckily there is a fingerprint scanner Arduino library written by jhawley. The code does most of the leg work for you and handles a lot of the complicated protocol commands. You can download it directly using the link below or find the source files on the GitHub repo.

This library is limited in functionality compared to the SDK_Demo.exe, but it gets the job done. If you look at the comments in the FPS_GT511C3's library, certain functions were not implemented due to the Atmega328P's memory restrictions. Certain functions were also not needed when it was originally written. The FPS_GT511C3 library and example code works with the GT511C3 and GT511C1R models.

The library has three examples. Each one performs a different task with the FPS:

The FPS_Blink.ino sketch is a basic test to see if the Arduino is able to talk with the fingerprint scanner through the serial UART. As a basic sanity check, it is recommended to test this code to make sure that your connections are correct and the scanner is able to send/receive commands. The code sets up a the Arduino's hardware serial UART for debugging and tells the scanner to send serial debug messages. The code also initializes the connection with the fingerprint scanner.

Once the setup is complete, the Arduino will tell the fingerprint scanner to toggle the white LED. By opening the serial monitor at 9600 baud, you should see this output:

The code will repeat and toggle the LED while printing to the serial monitor.

Below is what to expect in the serial monitor when enrolling a finger successfully:

Below is what to expect when the scanner fails if the first scan does not match the second scan.

Try enrolling a fingerprint by uploading the code and following the serial monitor's output. To enroll more than one fingerprint, just reset the Arduino.

Below is what you would expect when using this example:

Try testing the scanner with the code to see if the scanner is able to read the fingerprints that were enrolled.

The demo code was originally designed for the ATmega328P on the Arduino Uno. If you were using it with ATmega2560 (i.e. Arduino Mega 2560) or ATmega32U4 (i.e. Arduino Leonardo, Pro Micro 5V/16MHz, Pro Micro 3.3V/8Mhz, FioV3, etc.), you would need to re-configure the software serial pin definitions and adjust the connections. Not all the pins can support change interrupts for a serial Rx pin depending on what Arduino microcontroller is used. For more information, try looking at the reference language for the Software Serial library.

To use the FPS on an Arduino Mega 2560 or Arduino Leonardo, you would just need to comment out the line where it says:

and uncomment out the line here:

Once you change the code, make sure to rewire your connections to follow the pin definitions.

Caution: The FPS_GT511C3 library may not work for all microcontrollers using the Arduino IDE. As you move away from the ATmega328P family, you may need to modify the code or port the library over to get it working. It would be easier and faster to just have an Atmega328P bootloaded with Arduino to handle the FPS code. To use the fingerprint scanner, you could just write additional code to have the ATmega328P send serial data to the other microcontroller.