Example 4: From Alice to Bob

Note: There are 2 unique Arduino sketches for this example. Example4_Alice.ino and Example4_Bob.ino. You will need to use both of these to complete this Example. We recommend opening two separate instances of Arduino, this way you can setup each one with its own com port for uploading and serial terminal.

For Example 4, you will need to setup two Artemis boards with two co-processors, and connect a couple jumper wires between them. Using the Artemis Redboard, there is no soldering required for this setup.

Connect both of your Artemis boards to your computer using USB-C cables. Connect a Cryptographic Co-processor to each board using a Qwiic cable. 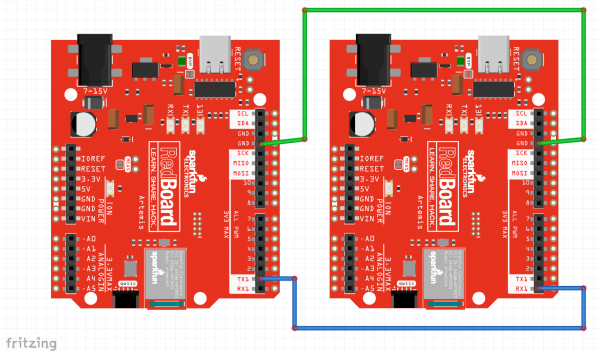 Note, both Alice and Bob need their own co-processor. So you're complete setup should look something like this: 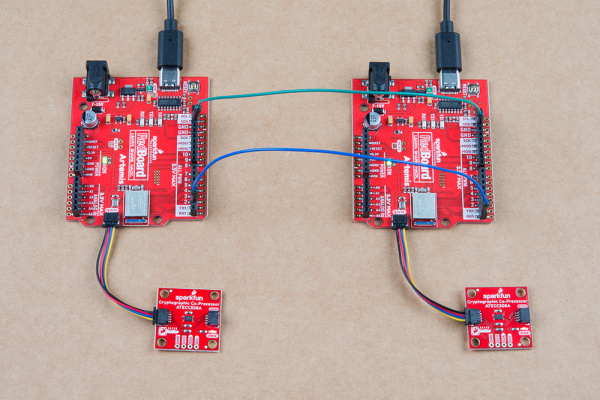 We will need to copy/paste Alice's public Key into the top of Bob's Sketch. First upload Alice's sketch to Alice, then watch her terminal at 115200. Copy her public key.

Now watch both Alice's and Bob's terminal at 115200. Type a y into Alice's terminal, and she will send a signed message to Bob. Watch Bob's terminal. He will receive the message and verify it.

Watch this looped video to see it all happen. (click to enlarge).

Operation of Example4_Alice.ino and Example4_Bob.ino working in conjunction. (Click to Enlarge)

Things to note about this:

As mentioned above, this example has two sketches. The purpose of splitting it up allows us to build upon the first three examples, and communicate securely between two completely separate systems.

Alice's sketch is actually quite similar to the Example2_Sign.ino, although it also sends the message and signature out it's TX1 pin.

Let's take a closer look at the important stuff within Alice's sketch:

At the top of this code block, you can see she is using atecc.createSignature(message), just like in Example2_sign.

Then Alice sends everything to Bob, including a start "header" ($$$). This is simply used to avoid errors during transmission and helps ensure that Bob hears the entire message.

One important thing to note is that when Alice sends her message and signature to Bob, she uses the Serial1.write() function, because she is sending data (not ASCII characters).

Now let's take a closer look at the important stuff in Example4_Bob.ino. Bob's sketch is actually quite similar to Example3_Verify.ino, although he receives the message and signature on his RX1 pin.

At the top, you need to copy in Alice's public key. Bob will need this to verify any messages and signatures he receives. Note, yours will be different than what I'm showing above.

Above, we have Bob's entire loop(). He is listening for incoming data on his RX1 pin. If he hears the expected $$$, then he starts reading in the message and the signature, storing them in variables for later use.

Then Bob uses the atecc.verifySignature() function to see if everything is authentic. Note his third argument to this function - he is using AlicesPublicKey!