Experiment 1: Sending and Receiving a Signal

There are a few methods of transmitting data between two or more micro:bits. You can send a number or a string. If you are unfamiliar with strings, it is basically a sequence of characters that make up a word.

If you followed along with the wireless remote micro:bot, you will remember that we simply sent one number to control the robot. For the scope of this tutorial, we will be transmitting the values from more than one sensor so we will want to know what number is associated with the reading. To do that, we will send a string and number pair between two micro:bits. We will animate the LEDs for each micro:bit as an indicator.

For this part of the experiment, we are going to send a string and number from one micro:bit to another micro:bit on the same channel.

Connect the first micro:bit to your computer via USB cable.

Heads up! If you have two or more pairs of micro:bits, make sure to adjust the channel for each pair. If one pair is transmitting/receiving, another pair can pick up the same signal causing great confusion!

When the micro:bit is powered up, we'll want to set the radio to a certain channel. In this case, we head to the Radio blocks, grab the radio set group __ block, and set it to 1. Later (in the next experiment) we'll have the transmitting micro:bit that is attached to the weather station continuously transmit data to a receiving micro:bit. In this section, however, we'll continuously send a string and number pair out - the word string will be sent out with the number 1. For feedback, we will use the Basic blocks to have the LEDs animate with a dot expanding out into a square to represent a signal being sent out. Once the animation is finished, we will clear the screen. We will add a short delay with pause _____ from the basic blocks to give the second micro:bit some time to handle the data before sending out data again. We will set it to 1000ms. 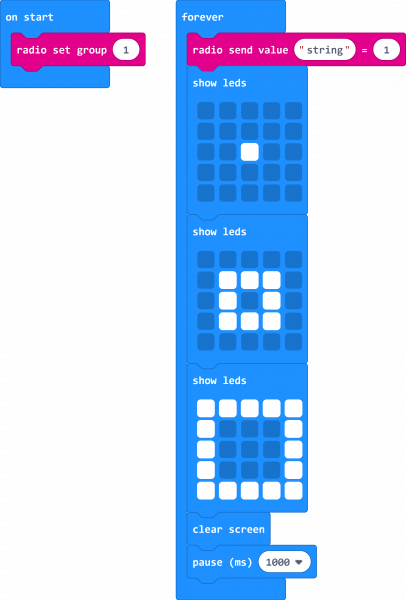 For this part of the experiment, we are going to have a second micro:bit receive a string and number from the first micro:bit.

Download the following example script and move the *.hex file to your micro:bit. Or use it as an example to build it from scratch in MakeCode. You will need to open a new project to receive the data from the first part of this experiment.

If both match, we will want some sort of indicator. Visually, using LEDs would be the easiest so an animation of a square shrinking to a dot was chosen to represent the received signal. Once the animation is finished, we will want to clear the screen until we receive another signal. 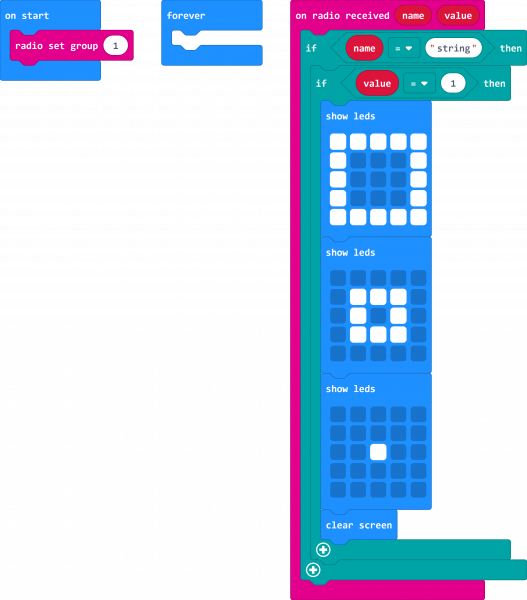 Powering both micro:bits up, the first micro:bit (our transmitting) will send a string and number pair out on channel 1. In this case, the pair was string and 1, respectively.

The second micro:bit (our receiving) will take that string and number pair that was sent on channel 1 and do something based on the condition statement. In this case, there is an animation using the LED array to indicate when we have received the pair.