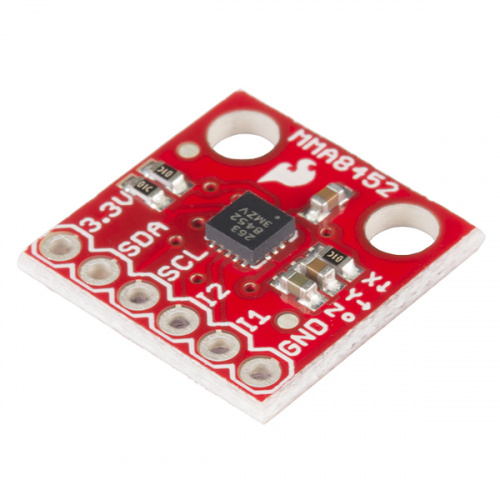 The MMA8452Q Breakout Board breaks out a select few of the most important pins on the accelerometer. 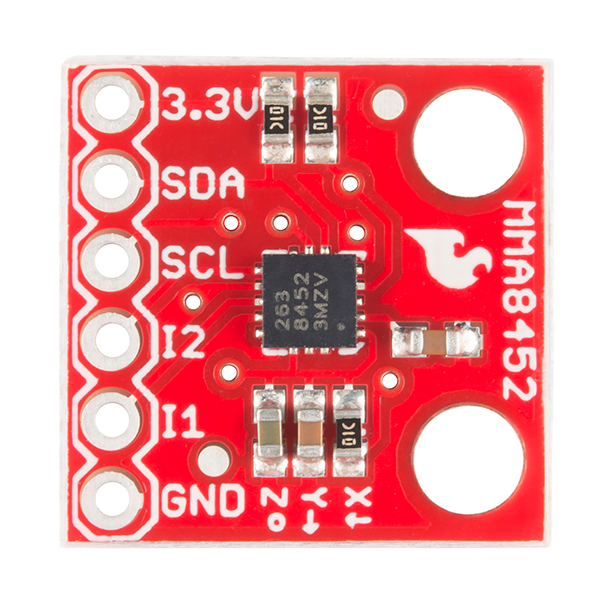 A little bit about each pin:

The big alert here is that the MMA8452Q has a maximum voltage of 3.6V -- that range applies to both the power supply and the I2C pins. If you're using the sensor in a 3.3V system you can plug it right in, but if you're using it with a 5V device (like an Arduino Uno), some level-shifting is required between devices.

Fortunately, you don't need a lot of power to make the MMA8452Q work. In normal operating mode it can require anywhere between 7 and 165 µA.

The MMA8452Q features a selectable I2C address -- just in case you're running multiple MMA8452Qs on the same bus (or maybe you have an address conflict). To select the address, a pin on the accelerometer -- "SA0" -- can be tied to either power or ground.

The breakout board includes a jumper, on the back side, to help tie this pin high or low. 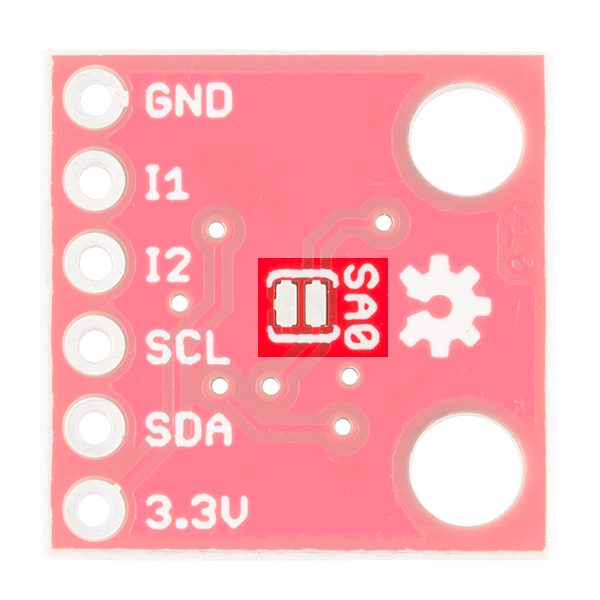 By default the jumper is open, which will pull the SA0 pin high (there's a resistor on the top side of the board to help accomplish that task). If you close the jumper, by applying a small solder blob to connect both pads together, SA0 will be pulled to ground.

For most use cases, where you're only using one MMA8452Q, you can leave this jumper untouched. In that case the I2C address will be 0x1D. 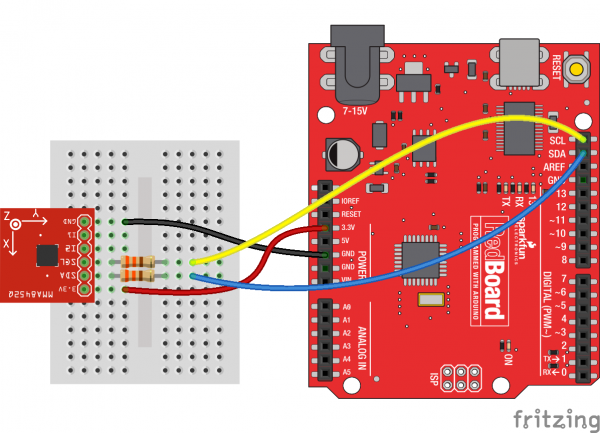 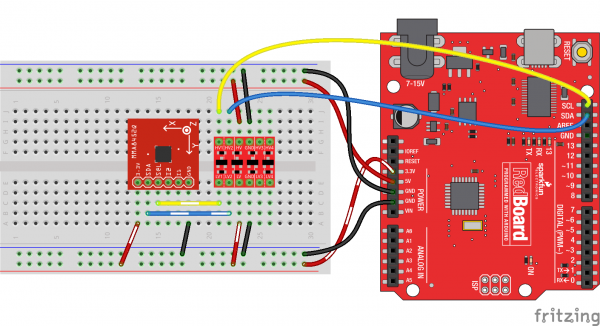 We've written an Arduino library to make interfacing with the MMA8452Q as easy as can be. Click on the button below to download the library. Or you can grab the latest, greatest version over on the library's GitHub repository.

Load Up the Example Sketch

Once you've installed the SFE_MMA8452Q library, restart Arduino. Then go to File > Examples > SFE_MMA8452Q > MMA8452Q_Basic to open the example sketch. 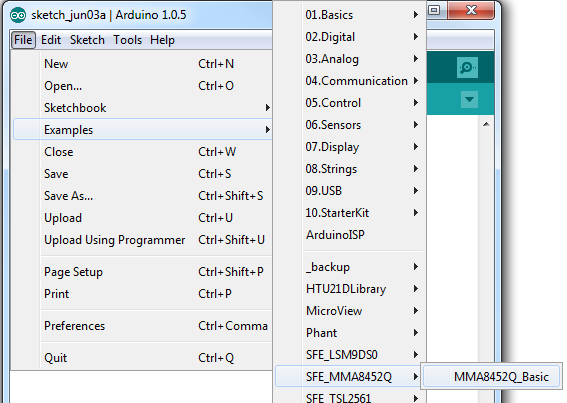 Once you've set your Board and Serial Port, upload the sketch to your Arduino. Then open the serial monitor. You'll begin to see acceleration values stream by, in addition to some information about the sensor's orientation. 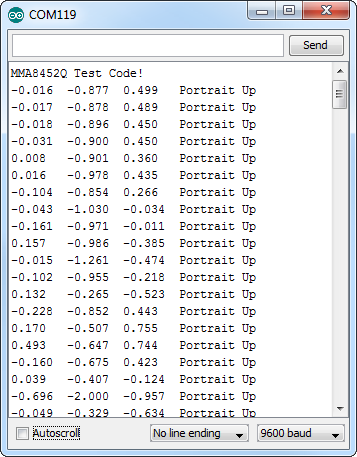 Try moving the sensor around to change those values. If it is motionless, flat on the desk, then an acceleration of 1g should be felt on the z-axis, while the others feel around 0. Test the other axes by rotating the board and making them feel the pull of gravity.

Here are some tips on using the MMA8452Q Arduino library so you can embed it into an Arduino sketch of your own.

Include the Library (Global)

To begin, you need to "include" the library in your sketch:

Once the library is included, you can create an MMA8452Q object. This line of code will do it for you:

Optionally, you can define the 7-bit I2C address of your MMA8452Q in this parameter, using one of these lines of code:

But if you've left the address jumper untouched (meaning the "SA0" pin is connected to VCC), you can call the default (no parameter) constructor shown earlier.

Again, you have a few options here. You can use a simple declaration like below. This will initialize the accelerometer with range of ±2g and an output data rate of 800 Hz (turns the accelerometer up to the max!):

If you want to specify the acceleration and output data rate, you can instead use an init() function like this:

Once you've set the accelerometer up, you can immediately start reading the data coming out of the chip. Reading and using the values is a two-step process. First, call the read() function to pull in the values.

After you've called the read() function, you can use either of two sets of values to use the data. Reading from the x, y, and z class variables will return a signed 12-bit integer read straight out of the accelerometer.

Or, if you want a value with physical units, you can use the cx, cy, and cz class variables. These are the calculated acceleration values read out of the accelerometer; they'll be in units of g's.

Remember! Those variables are only updated after the read() function is called. Make sure that happens before you start using acceleration values.

The MMA8452Q has all sorts of nifty, extra features, one of which is orientation detection -- it can estimate if it's being held in landscape mode, portrait mode, or flat.

To read the portrait/landscape data from the accelerometer, use the readPL() function. This function returns a byte, which will either be equal to PORTRAIT_U, PORTRAIT_D, LANDSCAPE_R, LANDSCAPE_L, or LOCKOUT.

As in the example above, you can use if or switch statements to check which orientation your accelerometer is in.

Thanks for reading! We're excited to see what you build with the MMA8452Q. If you're left needing more MMA8452Q-related documentation, check out some of these resources:

If you can't already tell, we love accelerometers! Check out all of the tutorials and projects we've created that feature an accelerometer and more. 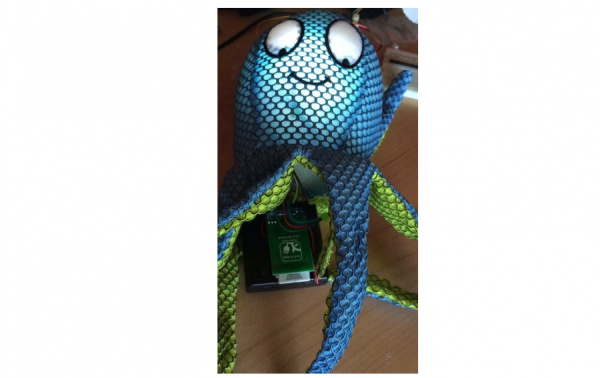 Are You Okay? Shake the stuffed animal to send a tweet and let your buddy know. 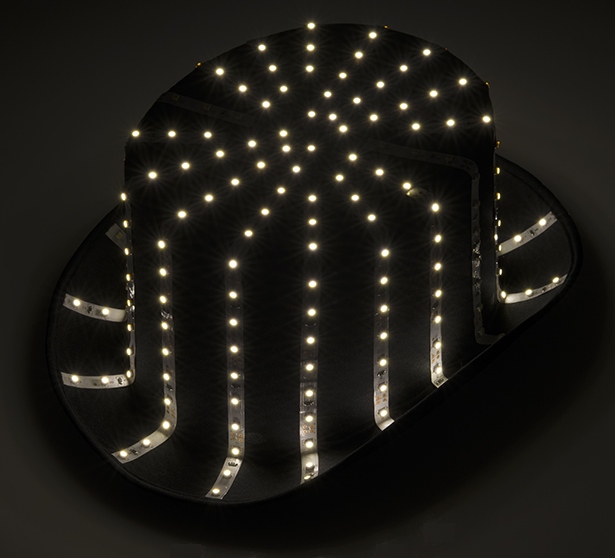