As you begin to edit the example code and write your own programs, you may experience some error messages. This section highlights a few common issues and solutions as you work on your Arduino code.

At the bottom of the Arduino IDE is section with a black background. This is the Debug Window - if something unexpected or incorrect happens and Arduino can't communicate to your LilyPad Arduino Simple or run the code you've written, an error message will display here. The top of the section will turn orange and a "Copy Error Messages" button will display.

An example of an error displaying in the debug window

Error: "Couldn't find a Board on the selected port"

This error happens when there is a missing ; at the end of a statement. Arduino will highlight the line in red in the code window and print a line number in the code around where the error occurred to help you identify where you need to fix something. You can turn on line numbering in Arduino > Preferences.

In this example, a missing ; after digitalWrite(A5, HIGH) caused the error.

Error: "'variable' was not declared in this scope"

Scope errors can happen for a variety of reasons, here are some common things to check: 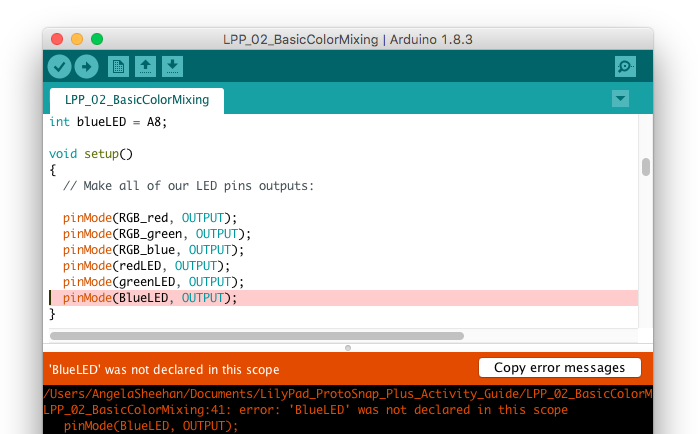 This error happened because the variable blueLED was mistyped as BlueLED. Arduino did not recognize BlueLED, while it may look similar enough to you, Arduino is case sensitive.

As you copy and paste to move pieces of your code around or work with nested functions, your code will accumulate a lot of curly brackets. To keep track of nested functions in the example code, we use indented formatting. Each new nested layer of function is indented an addition time to visually organize the code. If one of the opening { or closing } is accidentally deleted or not added, you will get an error.

Arduino has a handy feature built in that highlights the matching curly bracket if you place your cursor after one. You can use this to quickly check that there are no brackets left behind.

Placing the cursor next to the closing bracket of the for () loop highlights its matching opening bracket with a blue outline.

Depending on the Arduino IDE version that you have installed, you may also be able to view the function that was associated with the bracket if it is out of frame. In this example, we were using Arduino IDE v1.8.3.

Placing the cursor next to the closing bracket of the loop() function highlights the function and bracket when it is out of frame.

Why is my code not working even though it compiles?