The microcontroller on the LilyPad Arduino Simple can turn its outputs on and off very quickly. If you carefully choose the frequency at which you're turning an output on and off, and send that signal to the buzzer on the LilyPad Development Board, you can create tones and simple musical tunes. 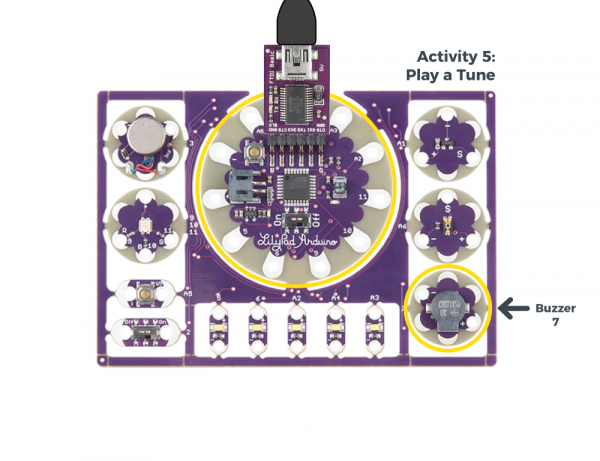 What is a Buzzer?

Inside the LilyPad Buzzer's plastic housing is a coil of wire and a small magnet. When current flows through this coil, it becomes magnetized and pulls towards the magnet, which makes a tiny “click”. When done thousands of times per second, the clicks create tones. In this activity, you’ll pulse the buzzer at specific frequencies to create musical notes. The buzzer can also be used to make alert sounds, robot beeps and boops, etc.

You'll use the tone() and noTone() commands to drive the buzzer at specific frequencies.

A tone’s pitch is what we perceive when we think of a note as being very high (screams, forks scratching plates, etc.) versus very low (like earth-rumbling bass). The pitch of a tone is very closely related to the frequency played through a speaker. If we toggle a pin from HIGH-to-LOW then LOW-to-HIGH 440 times per second, for example, it produces a 440 Hz (hertz) frequency - a “middle A” pitch. Humans can hear frequencies ranging from 20 (low-pitch, bass) to 20,000 Hz (high-pitch, “ow, my ears”).

Once the code uploads, the buzzer will begin playing a simple musical scale over one octave, pause, and repeat.