So far in these activities, we've controlled the brightness of LEDs manually. In this activity, you'll start letting the computer do the hard work. By using iteration (counting over a range of numbers), you can fade LEDs smoothly from off to on, a very nice effect you can use in your own projects. 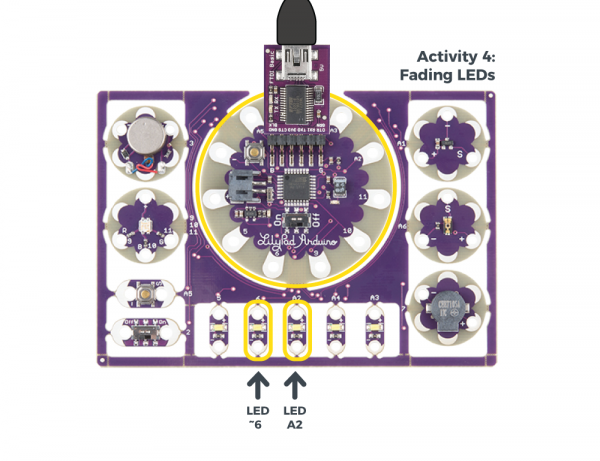 We've already seen that the loop() function repeats forever. But there are many occasions in programming where you'll want the microcontroller to do something a certain number of times, or count up or down between two numbers. The for() loop is perfect for this.

In this example, we will use the for() loop to slowly increment the brightness of a LED from fully off to fully on, then do the same thing in reverse to turn it off. This creates a "fading" or "breathing" pattern that is great for art projects.

Once you upload the program, two of the white LEDs on the ProtoSnap will light up. The LED on 6 will fade smoothly on and off, while the LED on A2 will blink.

If you look at the code, both pins should be fading. This illustrates the difference between the sew tabs which can handle pulse-width modulation, and those that can't.

Iteration, or making variables change over time, is a very powerful tool in programming. Here we're using it to smoothly change the brightness of an LED using the analogWrite() command, but you can use it anywhere you want to do something a certain number of times, or you want to change a variable from one value to another in even steps.

Unlike other commands, the for() loop is set up using three statements, which we'll cover below. You'll use the same pattern often in your own programming.