Note: Before assembling the pan-tilt mechanism, it is recommended that users follow the instructions for the servo pre-alignment in the getting started guide to avoid issues later.

Assembling the pan-tilt rig is by far the most involved part of this tutorial. Take your time and read the instructions carefully. Be mindful of the materials you are working with as well - using too much torque or force when tightening screws or fitting parts together can result in broken parts. On a final note, take extra care to make sure the servos are aligned correctly when mounting them. 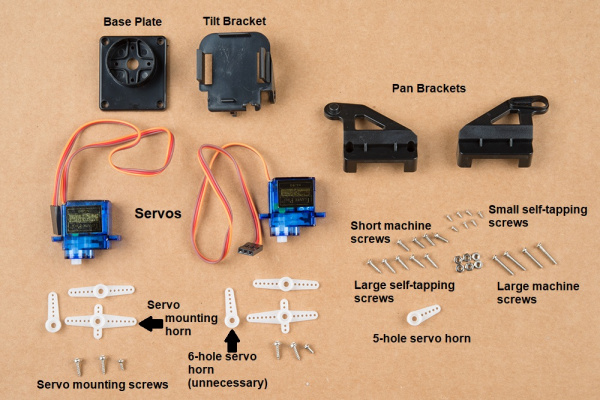 First, identify the larger self-tapping screws. These will be used for assembling the bottom part of the mechanism or the "Pan" part. 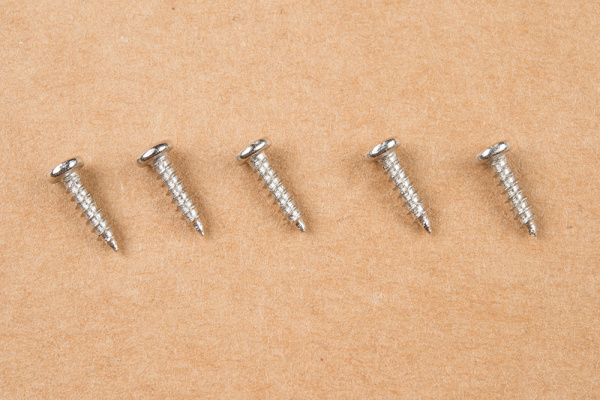 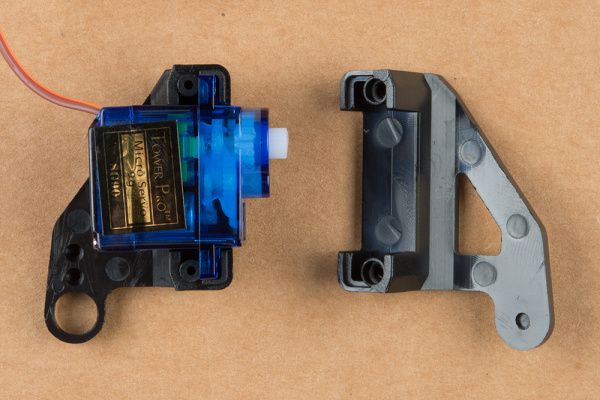 Here are the brackets together. Try to make sure the servo is centered. 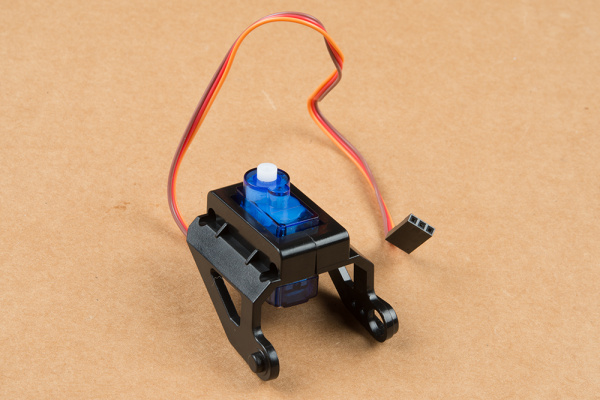 Take the larger self-tapping screws and affix the two brackets together like in the image below. Take extra care not to over-torque the screws and damage the plastic. 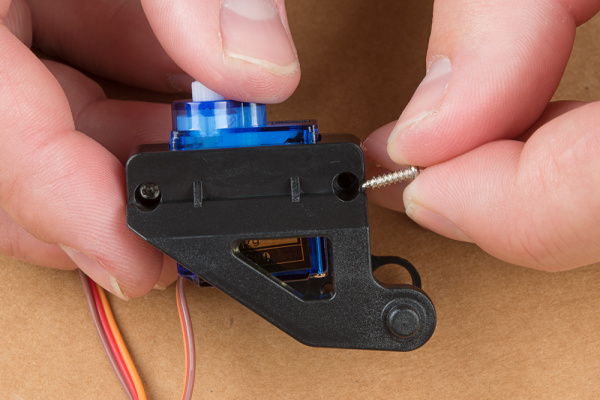 You'll now need the single arm servo horn with 5 holes, as shown in the image below. If, for some reason, the single arm servo with 5 holes was not included in the kit, you have two options. You can either contact Customer Service to have them send you a part, or you can modify one of the 6-hole servo horns that were packaged separately. If you are shortening the 6 hole horn, start by clipping off one hole and checking to see if it fits the mold on the tilt bracket. Be careful when clipping and make sure that you do not clip off too much of the horn. 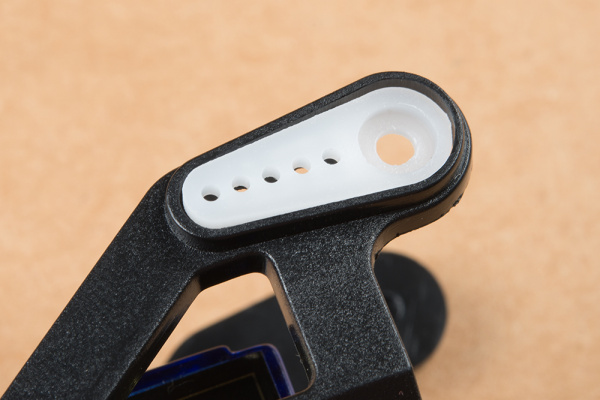 Install the single arm servo horn as shown below. You'll need two of the small self-tapping screws to affix it to the mechanism. 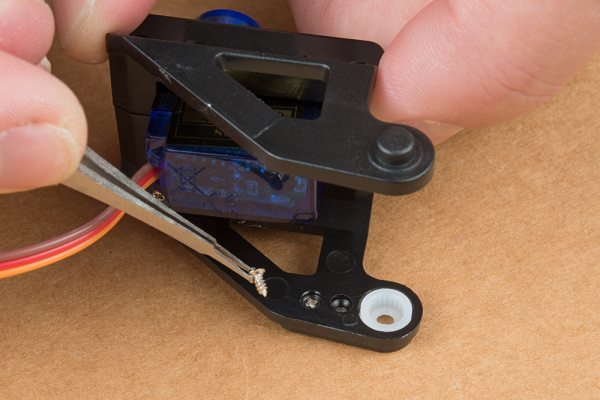 Note: If necessary, you can loosen screws on the brackets placed around the servo in order to attach the clipped single arm servo horn to the bracket. This will keep the screws straight when tightening the screws.

Next, you'll need the second servo motor and the Tilt Bracket. 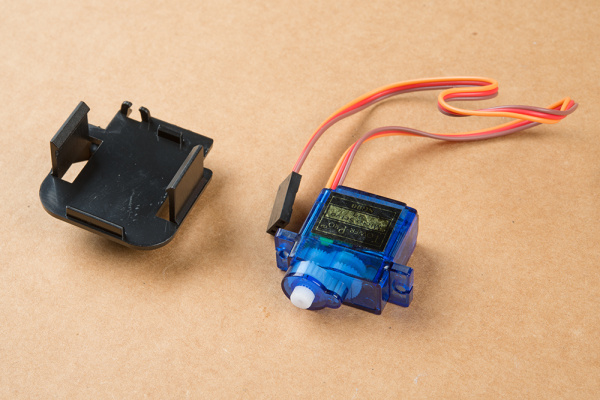 The image below shows the relative orientation of these two pieces: 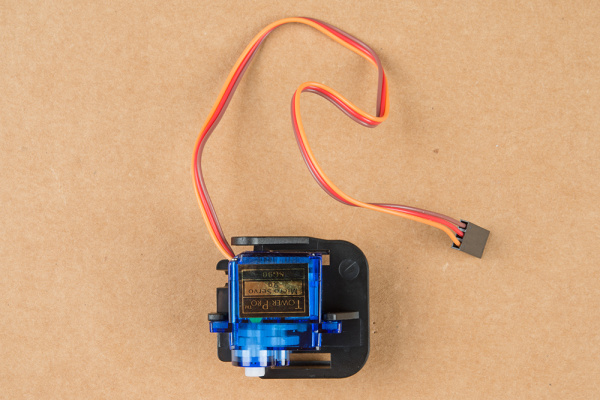 Now, find the longest machine screws in the bag, as shown below. You may find that there are more of these than you need. 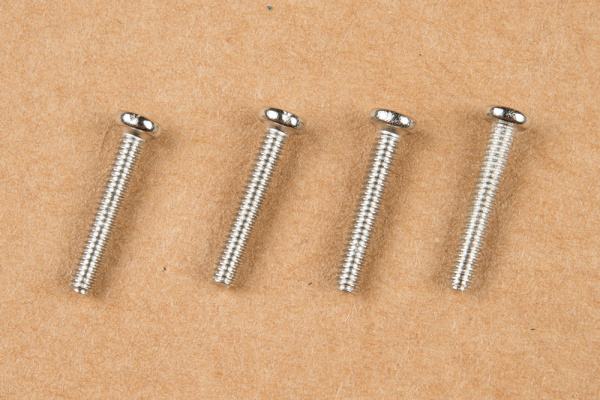 Thread these screws through the stand off wings on the servo motor and into the last piece of the mechanism. You can use nuts for these if you like, but I've found it to be unnecessary as they thread into the mechanism quite snugly without the nut. 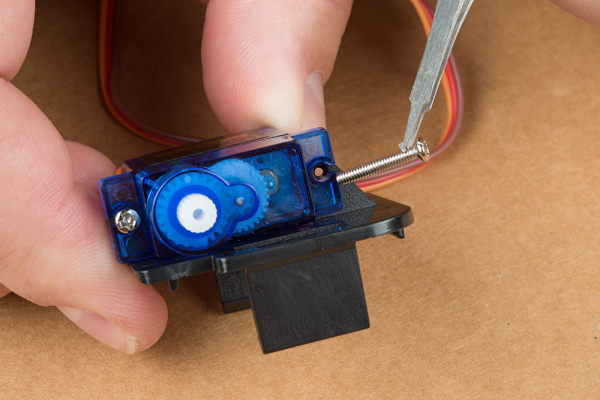 Now connect the two major pieces of the assembly together. The image below shows the orientation of these two parts. You may need to assemble and disassemble these two parts a couple of times to find the right rotational position of the servo motor so that the tilting portion has its full range of motion. Do this by connecting the two parts and carefully turning the "Tilt" servo back and forth until it's able to get the most unobstructed range while the mid-point of this range falls when the two servos are perpendicular to each other. 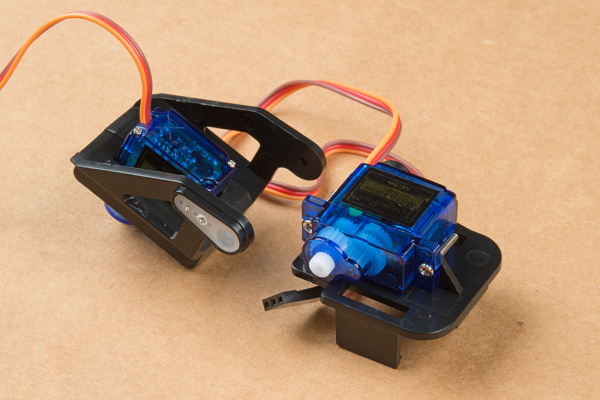 Here's an image of what it should look like with the two mechanisms attached. 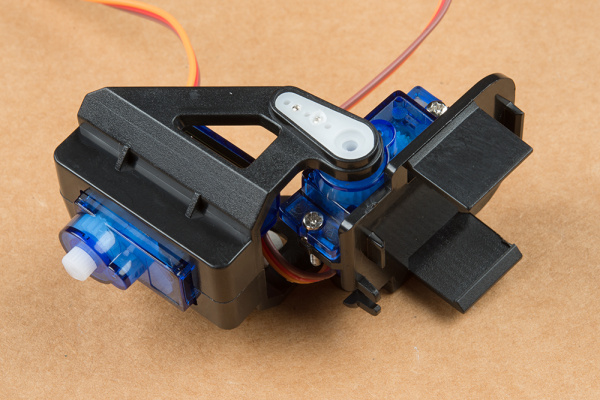 Sometimes the pan and tilt parts won't line up evenly. if this is the case, add a nut (provided in the bag) between the servo and the plastic part of the tilt mechanism as shown below. 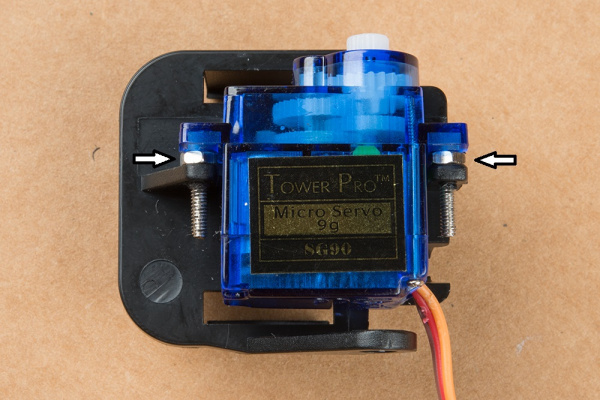 Take the final screw that you identified above as a horn attaching screw and use it to secure the horn to the servo motor. You do NOT need much torque here - be very gentle! 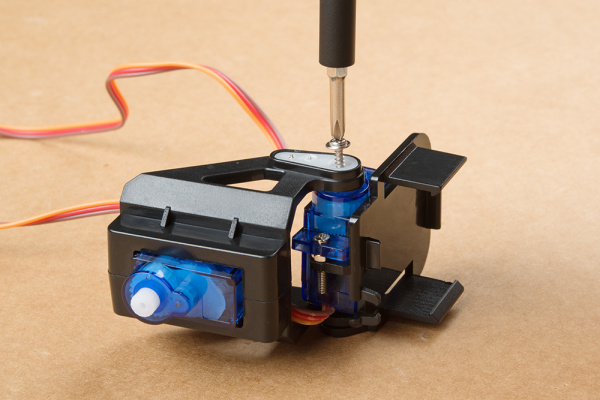 Congratulations! You've finished the most difficult part of this build. The rest should be a breeze! Put the pan-tilt mechanism to the side, we'll connect it to the cover plate of the RVR at a later time in the build.