How to Crimp an Electrical Connector

Below area few connector types. On the far, upper left, we have an insulated splice connector to connect two wire ends together. To the right, the forked connector (a.k.a. spade, or split ring) is useful for connecting wire to screw terminals by sliding the fork into a screw terminal's socket. Screws can be partially screwed in before installing the terminal. The ring terminals in the middle are also useful for connecting wire to screw terminals. While the ring terminal provides a more reliable connection, you would need to completely remove the screw before installing the terminal. On the far, upper right we have a male spade connector (a.k.a. blade). These can slide into the female spade connector (a.k.a. double crimp) that is shown on the bottom right. Depending on the design and application, these connectors can come in different flavors like flanged fork or locking ring terminal. 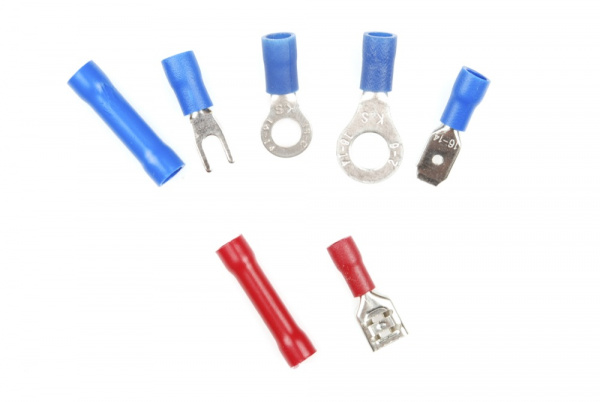 These connectors can also come in different sizes and ratings. The image shown below shows a 1/4" and 2.8mm female spade connector. 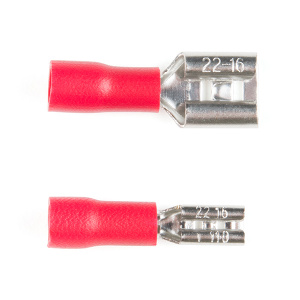 You will want to match the size of the connectors for a secure connection. The image below shows 1/4" female spade connectors connecting to a microswitch's male spade terminals. 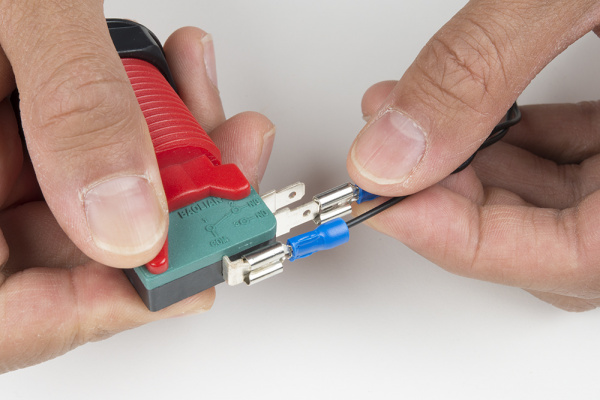 What is a Crimp?

The word crimping in this context means to join two pieces of metal together by deforming one or both of them to hold the other. The deformity is called the crimp. 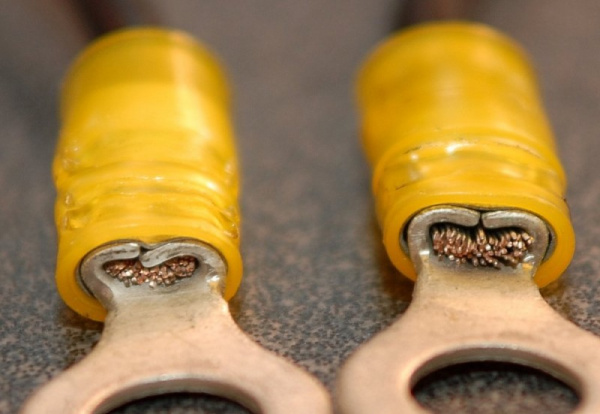 In order to crimp connectors onto a wire, a special tool is require for the crimp pin. There are several different styles of crimpers available depending on the crimp pin.

Depending on the size of the connector, the type of the "die" (i.e. the crimp tool's head) will be sized differently. The crimp tool below uses a different die to crimp smaller crimp pins that slide into a pin connector housing. 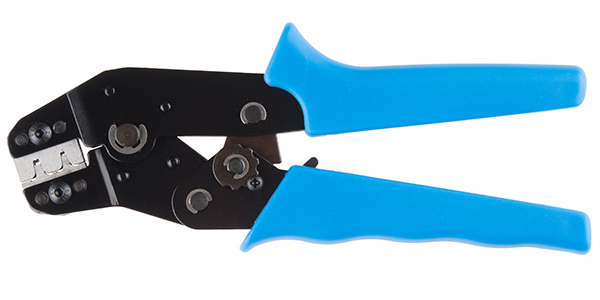 The images below show different gauges of wire crimped to forked connector and crimp pin for a polarized connector.

Manual crimping tools can achieve nearly the same results, although it requires the user be much more vigilant. This style of crimper is generally less sturdy. Attention must be given while crimping to ensure the jaws are lined up properly on the connector. Misalignment will cause a less than desirable crimp connection. Over time, wear and tear from normal usage can also cause the jaws to become separated and not close fully. Generally, squeezing it as hard as possible will be sufficient. The fancy wire stripper shown below can be used with quick disconnects. The tool can also be used to cut wire and strip wires/cables.

While the self-adjusting wire stripper is a bit harder to work with than a ratchet, it has the ability to strip, cut, and crimp a quick disconnect.

Warning! Pliers are not crimpers! Neither are hammers, vises, needle nose pliers or flat rocks. A good crimper when used correctly will make a cold weld between the wire and the barrel of the connector. If you were to cut a well executed crimp in half you would see a solid form of wire and connector. Using the wrong tool will not achieve a good crimp! 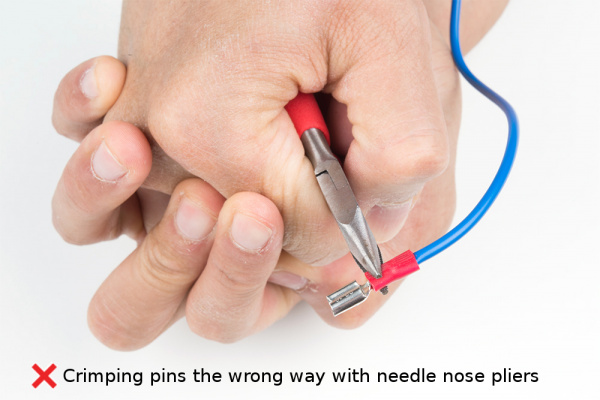 Why is this level of perfection required? A poor crimp leaves air pockets between the wire and connector. Air pockets allow moisture to collect, moisture causes corrosion, corrosion causes resistance, resistance causes heat, and may ultimately lead to breakage.

First, the correct size wire must be chosen for the terminal size, or vice versa. We'll assume that you are using stranded wire so that th wire conforms to the crimped connection. Next, strip the wire. The amount of exposed wire should be equal to the length of the metal barrel on the connector, usually around ¼” or so. If the stripped wire fits up into the metal portion of the barrel with little or no free space, the connector is the right size. 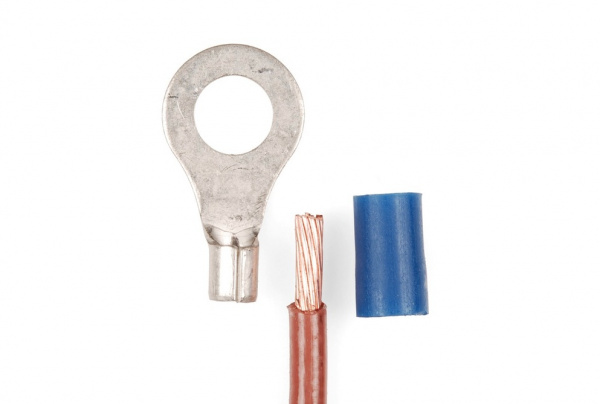 A good length of wire to barrel ratio

The wire should then be inserted until the insulation on the wire touches the end of the barrel. 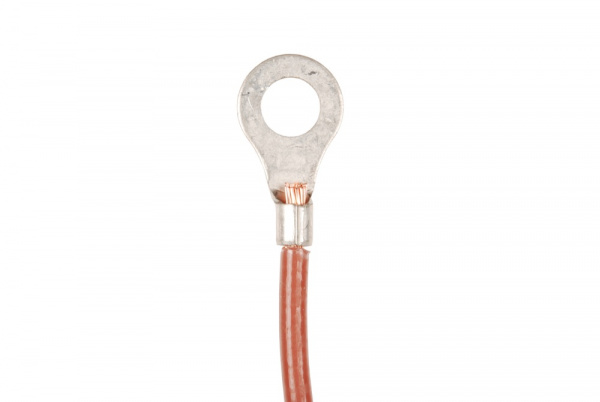 Good: The wire is sticking past the barrel just a little

The terminal should be sitting horizontal with the barrel side up. The tool is then held perpendicular to the terminal and placed over the barrel, nearest to the ring (or other connection type). To finish the crimp, the tool is squeezed with a considerable force. In general, it is almost impossible to ‘over crimp’ a connection.

Heads up! Check out the post from Hacakday for more information on crimping, a cross section of a crimped wire, and a video!


Hackaday | Good in a Pinch: The Physics of Crimped Connections

For a detailed examples of good and bad crimped pin, check out the following from JST! 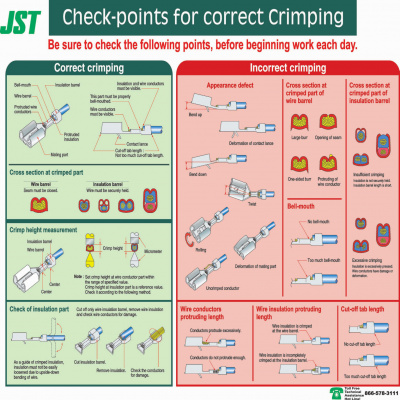 After the crimp is completed, the wire and connector should still hold together after trying to pull them apart with great force. If the connection can be pulled apart, the crimp was not done correctly. It is better to have the crimp fail now, versus after it has been installed in its application. Below is a military spec chart for crimped connections.

Tip: If the wire does not fit in the barrel, or is excessively loose, the wrong size and type of either wire or connector was chosen. If necessary, you could add a solder joint between the wire and connector. However, wires that are crimped properly will create a gas tight, cold joint and should not need solder. 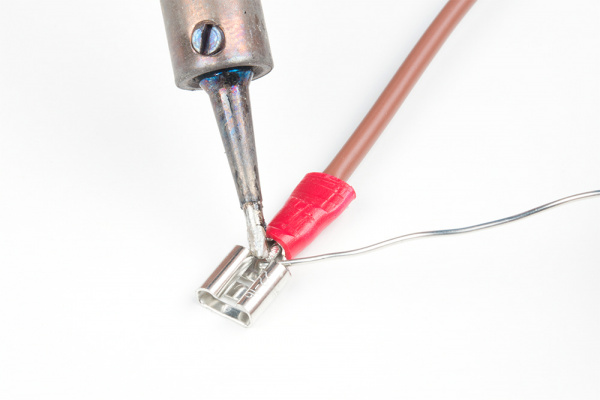 Keep in mind, that adding solder will add stress to the joint due to mechanical vibrations and thermal cycling causing joint failure. Soldering can also increase resistance at the joint. For low power applications, users should not notice a significant difference.
Tip: Depending on the application, two wires can be crimped with together in a single crimp connector. You'll need to ensure that the combined wire diameter is able to fit in the crimp connection and the crimp connector is able to handle the amperage of the project.

The image below demonstrates two wires crimped with female spade headers for the middle connections. In this case, the crimped wires were used to connect multiple devices to ground. 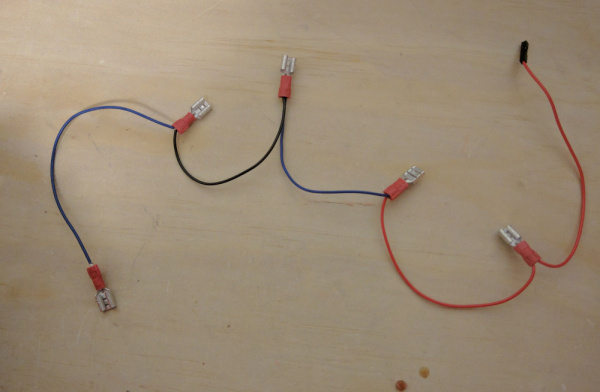 Remember, there are hundreds of types of electrical connectors out in the world. Depending on the design, the connector can be designed in a way to fit into a plastic housing. Instead of a barrel crimping down on a wire, the connector may include two crimp tabs (i.e. wings) to crimp over wire and its insulation. The additional crimp tabs for insulation provide strain relief. The crimp pin may also have a locking tab and terminal stop when the pin is inserted in a plastic housing.

One example can be found in the pre-terminated, premium jumper wires. They are used for connecting to PCBs designed with 0.1" PTH pads. Below is an image of a few crimped pins before being inserted in their plastic housing. On the left is a crimp pin to fit inside a polarized housing. On the center is a female pin used to mate with the male pin on the right. 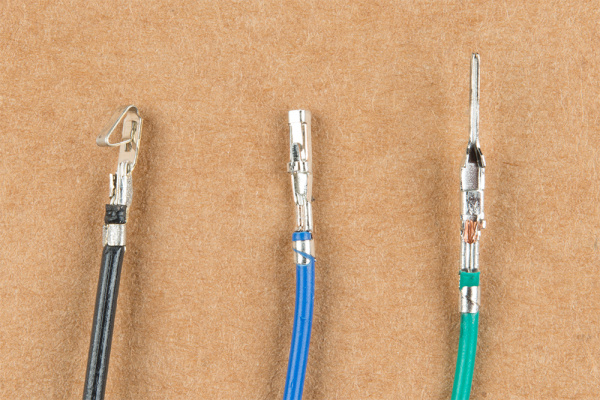 The process is a bit more tedious since you are working with smaller pins. Depending on your level of experience, this can be time consuming. However, users can create custom wire lengths and cables for a project. 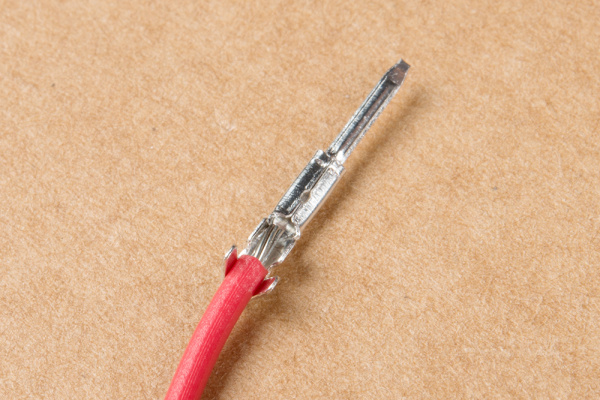 If the wire and stripped sufficiently, insert the crimp pin into one of the crimp tool's jaw. You may need to bend the insulator's tabs inward to fit. We'll use the bigger jaw. 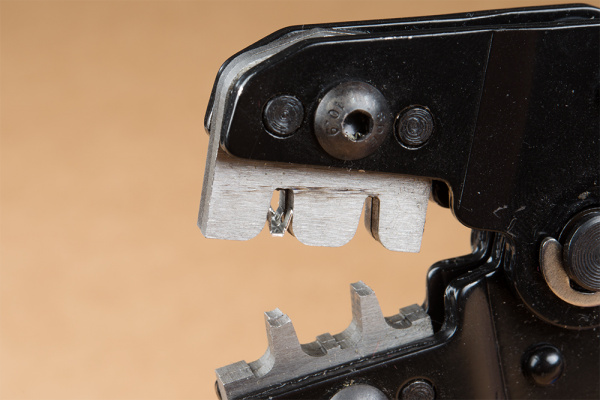 Make sure to take note grooves of the crimp tool when inserting the crimp pin into the die. If you observe closely, there are two semicylindrical grooves cut on one side of the jaw while the other has one groove. The side that has two grooves will be used to crimp the tabs. Additionally, half of the die is recessed for the insulator tab.

Warning! If you insert a crimp pin incorrectly, the ratcheted crimp tool will not sufficiently crimp the tabs. As a result, the wire may not fully conduct with the pin and the pin will be damaged. The crimp tool can also get stuck in one position. If the crimp tool is stuck, you will need to flip the safety release pin just above the handle. 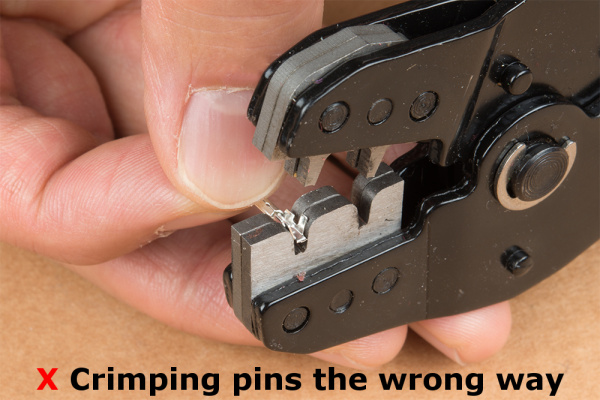 Slowly close the ratcheted crimp tool to hold the crimp pin in place and insert the stripped wire. You may need to adjust the crimp pin so that its insulator tab is flush with the die. 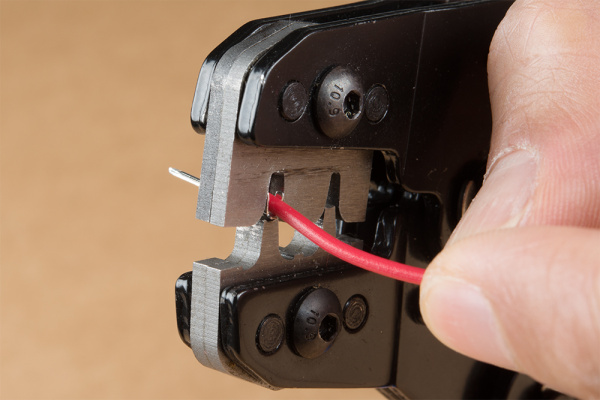 When ready, slowly squeeze the handles more to continue crimping the tabs. If something is not right and you are using a ratcheted crimp tool, flip the safety release pin just above the handle. Continue squeezing the handle until the ratchet releases automatically to finish the crimp. 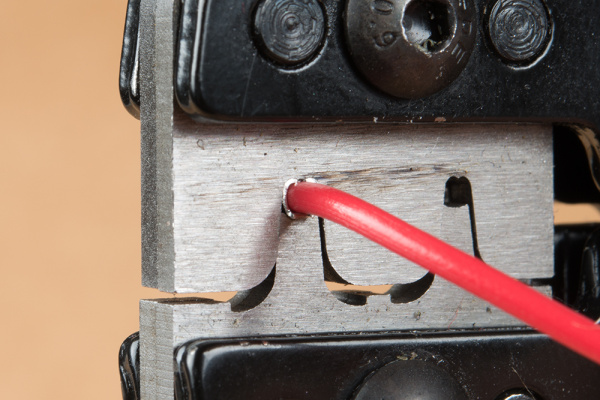 Carefully, remove the crimped pin out of the crimp tool. Observe the crimped tabs. You should see something similar to crimped pins below. If necessary, you may need to re-insert the pin back into the jaws to sufficiently crimp the the tabs. The crimp pin on the far left was partially crimped and needed to be placed in the smaller jaw for a proper crimp. 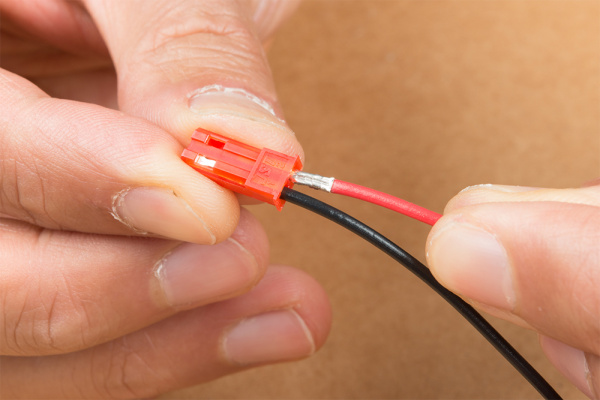 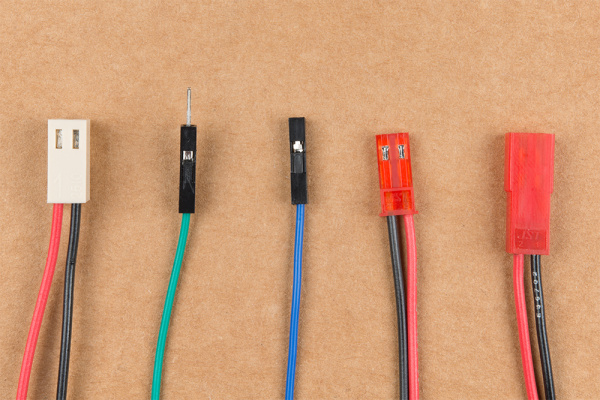 Wrong size connector for the wire or wrong size wire for the connector. 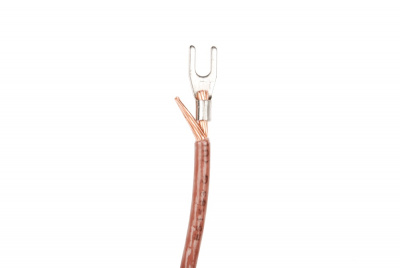 Bad crimp. Connector was too small for the gauge of wire chosen.

Be cautious not to strip too much insulation off. 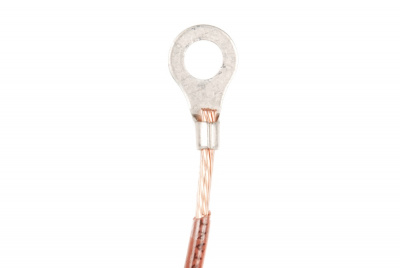 Too much insulation has been stripped off, too much bare wire exposed

It is also worth mentioning that, while not necessarily harmful, The wire should not be protruding too far past the barrel. If this happens, trimming the wire is recommended. 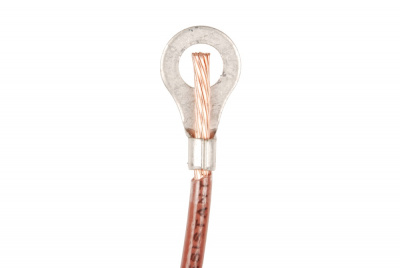