Combining capacitors is just like combining resistors...only the opposite. As odd as that sounds, it’s absolutely true. Why would this be?

A capacitor is just two plates spaced very close together, and it’s basic function is to hold a whole bunch of electrons. The greater the value of capacitance, the more electrons it can hold. If the size of the plates is increased, the capacitance goes up because there's physically more space for electrons to hang out. And if the plates are moved farther apart, the capacitance goes down, because the electric field strength between them goes down as the distance goes up.

Now let’s say we've got two 10µF capacitors wired together in series, and let’s say they’re both charged up and ready discharge into the friend sitting next to you. 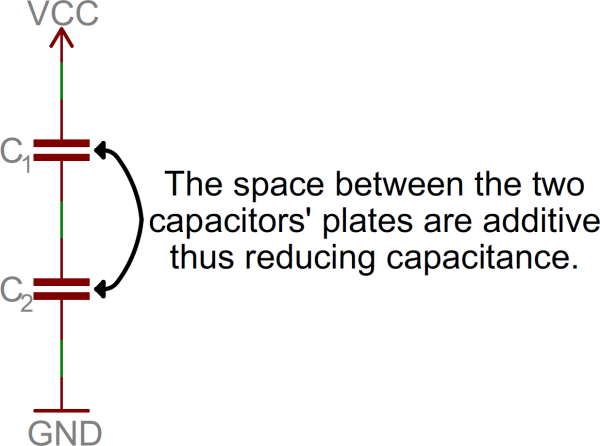 In fact, it’s even worse than that. By placing the capacitors in series, we've effectively spaced the plates farther apart because the spacing between the plates of the two capacitors adds together. So we don't have 20µF, or even 10µF. We’ve got 5µF. The upshot of this is that we add series capacitor values the same way we add parallel resistor values. Both the product-over-sum and reciprocal methods are valid for adding capacitors in series.

It may seem that there’s no point to adding capacitors in series. But it should be pointed out that one thing we did get is twice as much voltage (or voltage ratings). Just like batteries, when we put capacitors together in series the voltages add up.

Adding capacitors in parallel is like adding resistors in series: the values just add up, no tricks. Why is this? Putting them in parallel effectively increases the size of the plates without increasing the distance between them. More area equals more capacitance. Simple.