If components share two common nodes, they are in parallel. Here's an example schematic of three resistors in parallel with a battery:

From the positive battery terminal, current flows to R1... and R2, and R3. The node that connects the battery to R1 is also connected to the other resistors. The other ends of these resistors are similarly tied together, and then tied back to the negative terminal of the battery. There are three distinct paths that current can take before returning to the battery, and the associated resistors are said to be in parallel.

Series and Parallel Circuits Working Together

From there we can mix and match. In the next picture, we again see three resistors and a battery. From the positive battery terminal, current first encounters R1. But, at the other side of R1 the node splits, and current can go to both R2 and R3. The current paths through R2 and R3 are then tied together again, and current goes back to the negative terminal of the battery. 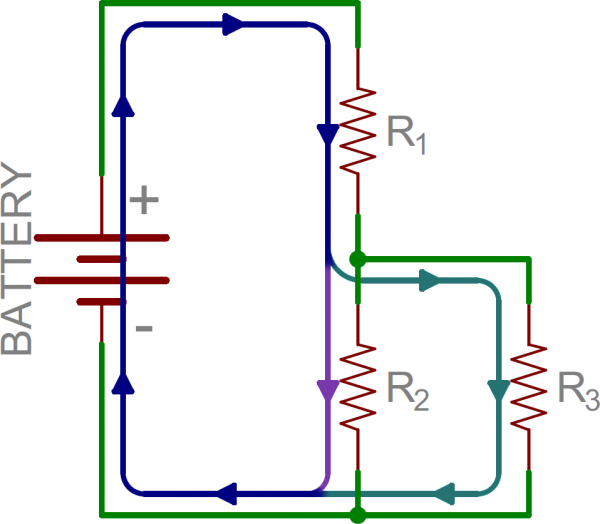 In this example, R2 and R3 are in parallel with each other, and R1 is in series with the parallel combination of R2 and R3.