Let’s try a simple experiment just to prove that these things work the way we're saying they do.

First, we’re going to hook up some 10kΩ resistors in series and watch them add in a most un-mysterious way. Using a breadboard, place one 10kΩ resistor as indicated in the figure and measure with a multimeter. Yes, we already know it’s going to say it’s 10kΩ, but this is what we in the biz call a “sanity check”. Once we’ve convinced ourselves that the world hasn't changed significantly since we last looked at it, place another one in similar fashion but with a lead from each resistor connecting electrically through the breadboard and measure again. The meter should now say something close to 20kΩ.

You may notice that the resistance you measure might not be exactly what the resistor says it should be. Resistors have a certain amount of tolerance, which means they can be off by a certain percentage in either direction. Thus, you may read 9.99kΩ or 10.01kΩ. As long as it's close to the correct value, everything should work fine. 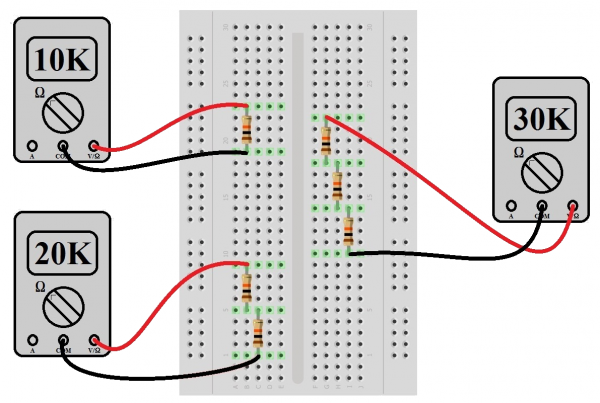 The reader should continue this exercise until convincing themselves that they know what the outcome will be before doing it again, or they run out of resistors to stick in the breadboard, whichever comes first.