In this tutorial we will use a Pi AVR Programmer HAT and a Raspberry Pi 3B+ to program an ATMega328P target IC (RedBoard). We will program the Arduino bootloader over SPI using the capsense pad to engage, and then do some programming using avrdude in the command line. We will also cover how the Pi AVR Programmer HAT hardware works in conjunction with Python, avrdude, and shell command files. 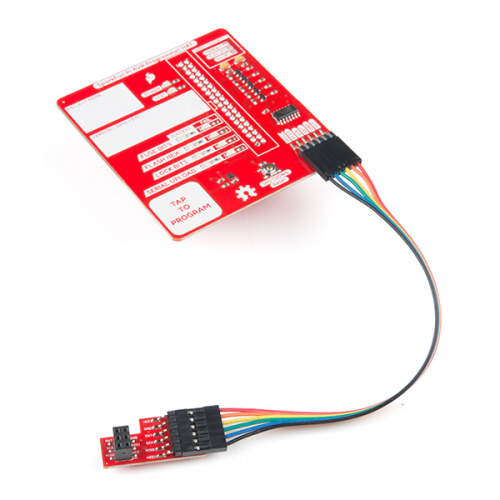 The SparkFun Pi AVR Programmer HAT makes it easy to program AVRs directly from the SPI hardware pins on any Raspberry Pi.

The Pi AVR Programmer HAT makes it easy to program AVRs directly from the SPI hardware pins on any Raspberry Pi. It was originally designed as an in-house solution for SparkFun production, but now is offered as a robust programming tool for anyone to purchase. It is by far one of the fastest, most reliable, and hack-able (fully open sourced) AVR programming solutions available. It can be used directly from the command line using avrdude commands, or with some simple setup steps, it can function as a stand-alone programmer with capsense-pad engage and status leds!

All of the design files, firmware, and example programming files can be found here:

There are many reasons for programming your AVR via an in-system programmer (ISP):

In this tutorial we will introduce you to all of the important aspects of the Pi AVR Programmer HAT. It's split into a series of sections, which cover:

Note The wishlist is our list of suggested parts to complete this tutorial. You can use any other Raspberry Pi Model you'd like (0, 2, 3, etc.). In this tutorial we use the 3B+ model. Another good option is the Raspberry Pi 3 Starter Kit, which includes most everything you need to get up and running with your Pi. You can choose a different target Arduino board. We use the Redboard in this tutorial.

To complete this tutorial, you will need the following hardware. You may not need everything though depending on what you have. Add it to your cart, read through the guide, and adjust the cart as necessary.

To read even more about the history behind this project and design choices, check out the full tutorial/write up here:

This tutorial will show you how to use a headless Raspberry Pi to flash hex files onto AVR microcontrollers as a stand-alone programmer. It also tells the story about production programming challenges, how SparkFun came to this solution, and all the lessons learned along the way.
Favorited Favorite 10

Whether you're a beginner or experienced electronics enthusiast, the Pi AVR Programmer HAT should be easy to get up-and-running. If you've programmed an Arduino before, you'll be well-prepared for the next step. Here are some addtional tutorials we'd recommend reading before continuing on with this one.

SPI is commonly used to connect microcontrollers to peripherals such as sensors, shift registers, and SD cards.
Favorited Favorite 84