Your robot should do something more than just drive around! Maybe control a small robotic arm, a gripper or even a weapon of some kind. In this experiment you will integrate servo motors with your robot to build a Battle Bot with Jousting Lances. This experiment combines all the elements you've learned so far in this tutorial.

Didn't get the kit? Have no fear! Here are the parts you will need to complete this experiment...

The Line Follower sensor is an add-on for your RedBot that gives your robot the ability to detect lines or nearby objects. Th…

This is a simple three wire cable. Great for jumping from board to board or just about anything else. There is a 3-pin JST RE…

To complete this experiment, we are going to also need a few more components.

Introduction to the Servo Motor

Unlike the action of most motors that continuously rotate, a servo motor can rotate to and hold a specific angle until it is told to rotate to a different angle. You can control the angle of the servo by sending it a Pulse Width Modulation (PWM) pulse train (turning a pin on and off really fast at different intervals); the PWM signal is mapped to a specific angle from 0 to 180 degrees in the servo block with MakeCode. 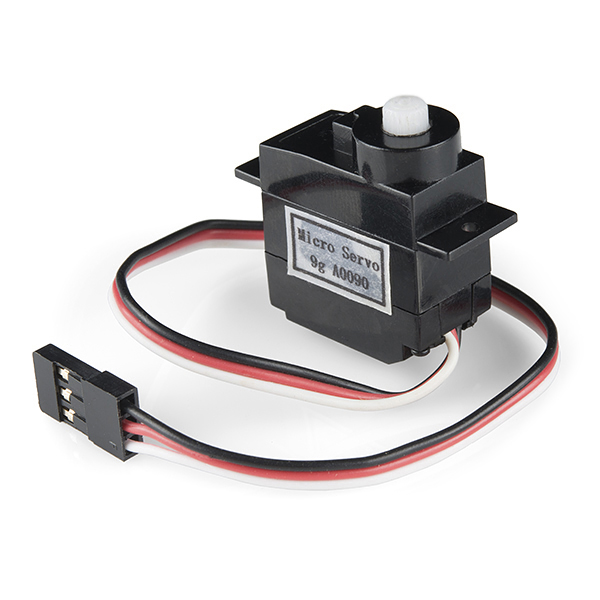 In this experiment, you will actually be using two different servo motors to create a Battle Bot! One will be used as a "left" jousting lance and the other as the "right". If you look at the servos, you will notice that they have three wires have different colors; red, black and white. Red is the supply voltage, black is ground and white is the signal. Hook the two servos up to the moto:bit at the two labeled servo ports. Make sure you line up ground to ground. 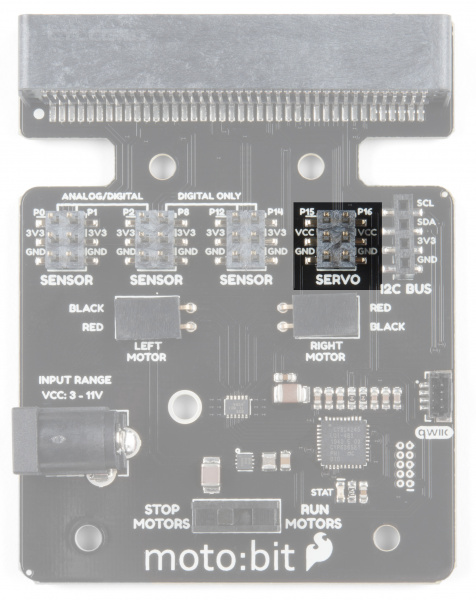 Next, you can build the jousting lances by utilizing some grilling skewers! You will only need two that can be cut down to the needed size. You can either glue or tape each skewer to the servo to the supplied attachments. Each servo set comes with a small bag of attachments as seen below. In this experiment, we utilized the double arm micro horn, but any of them will work. 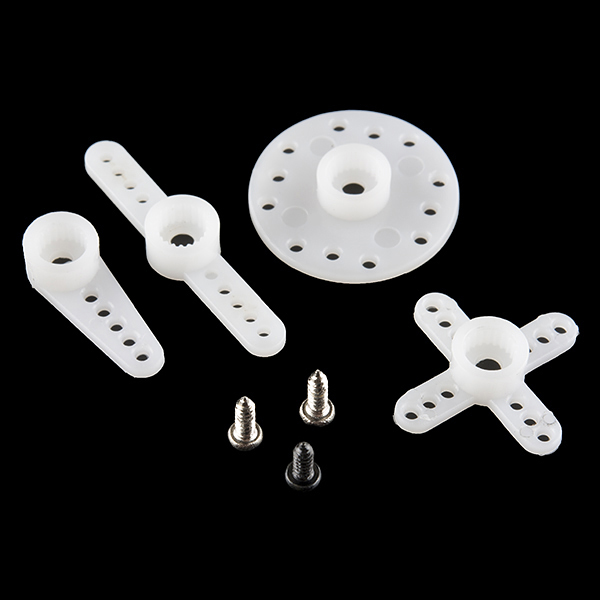 Don't have any skewers laying around? Be creative here!

This Battle Bot utilized electrical tape to mount the jousting lances to the servo motors, and it ended up looking something like this... 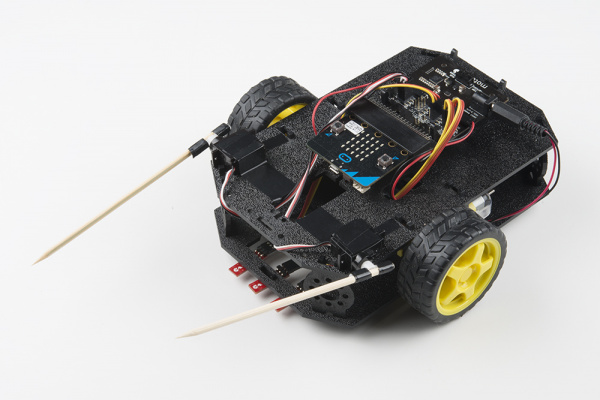 Now, set your contraption aside until you have uploaded your code.

Note: When you think of jousting lances, they can have pointy ends. If you feel the need, grab a set of ping pong balls and poke a hole carefully with the skewers. Secure the ping pong balls to the skewers with some glue. If you need, check with an adult for assistance. 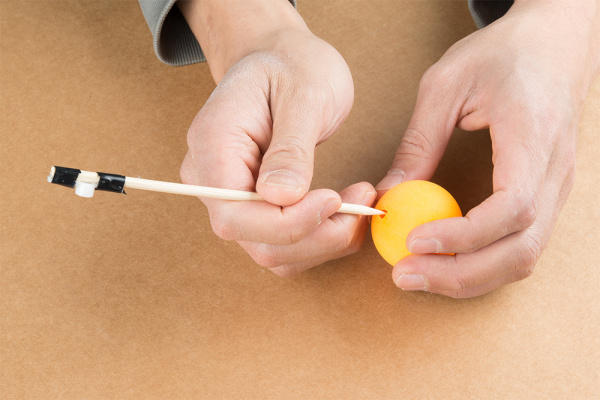 Not as terrifying but safe. 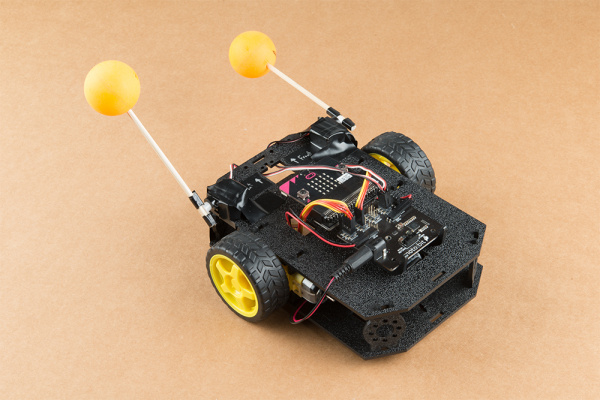 Don't be overwhelmed by everything this code has to offer! I know it looks rather menacing, but the truth is that you've already done all of this code in previous experiments. 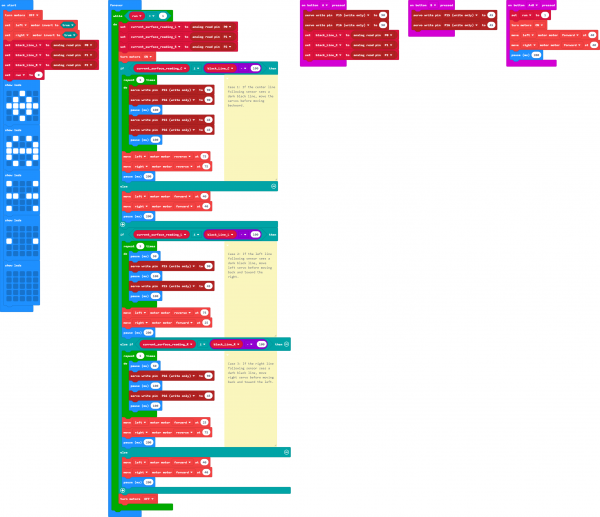 Having a hard time seeing the code? Open the MakeCode in a separate window to edit or click on the image for a closer look.

The Servo Write Pin to block is found under the Pins drawer and it accepts a pin number that you have a servos signal wire attached to as well as an angle that you want it to rotate to. That's the basics for controlling a servo motor with Microsoft MakeCode!

In this example we use the On Button event blocks a lot. They allow us to break out different functions we want without messy if statements.

In this program the On Button A event block resets the calibration value for the table surface for the robot to use as a comparison value and also sets the servo positions to 90 degrees. 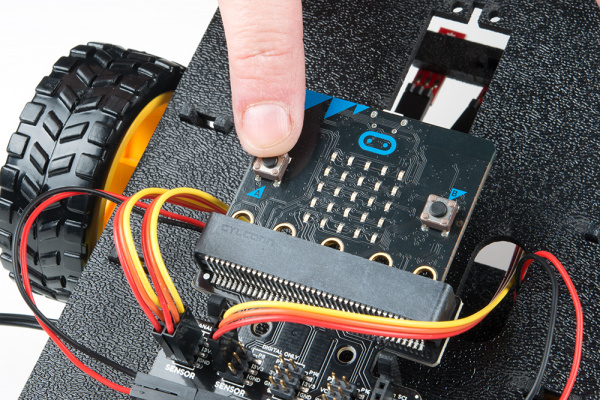 The On Button B block is used to set servo position to 45 degrees. 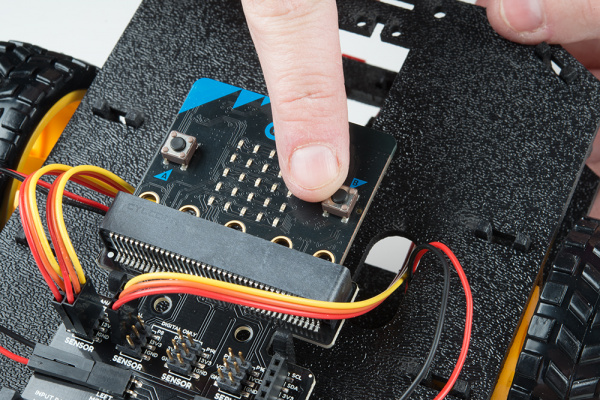 Finally the On Button A+B event block is used to run the program.

You may notice that there is a few if / then blocks inside of the if statement in the forever block. This will aid your Battle Bot in making decisions and knowing what it has to do next.

Before running the program, make a thick line (about 12" wide x 6" long) using black electrical tape. This is where your robot will meet with an opposing robot.

When the code initializes, the servo "arms" will move into a starting position and take initial readings for your line sensors to establish a comparison point to the ground environment. Make sure to calibrate it with a black line before starting. Then place each robot at an equal distance away from the line.

Initially, the Battle Bot will not move. Press on buttons A and B at the same time to run the program. The robot will move forward if none of the line sensors detect the black line. If the center line sensor detects a black line, the Battle Bot will immediately start both servos and move backwards. If the left or right line sensors detect a dark surface, the side that detected it will have the corresponding jousting lance start to move while turning away from it. So your Battle Bot is prepared to defend itself from any oncoming situation!

Go Further: Design two parallel tracks using a black surface. Separate the tracks with a center "wall". Adjust the servos and extend the length of the skewers so that the robots can joust the other robot across the wall. Design and program the robot to follow their respective paths without turning back using the line following sensors. See who can disarm the other robot first.

Or figure out a creative way for it to know when to drop something at a specific location. Could you also program it to pick something up?