Now, what happens when something bumps into your robot? It just stays there and take it from this bully? No! It should move out of the way, or do something. In this experiment you will use the accelerometer on the micro:bit to trigger the robot to move out of the way. If you flip the robot on its back or stand it on end it will stop driving (play dead)!

Didn’t get the kit? Have no fear! Here are the parts you will need to complete this experiment. You may not need everything though depending on what you have. Add it to your cart, read through the guide, and adjust the cart as necessary.

A quick introduction to accelerometers, how they work, and why they're used.
Favorited Favorite 28

Introduction to the Accelerometer

An accelerometer is a sensor that measures the gravitational forces pulling on it in all three dimensions of the chip's X, Y and Z axes.

Visualization of a Common Accelerometer (ADXL345) with Three Axes

Accelerometers are devices that measure acceleration, which is the rate of change of the velocity of an object. They measure in meters per second squared (m/s2) or in G-forces (g). A single G-force for us here on planet Earth is equivalent to 9.8 m/s2, but this does vary slightly with elevation (and will be a different value on different planets due to variations in gravitational pull). Accelerometers are useful for sensing vibrations in systems or for orientation applications. Vibration is what we are looking for!

You have had the hardware hooked up the whole time! It is on the micro:bit! Feel free to move on. 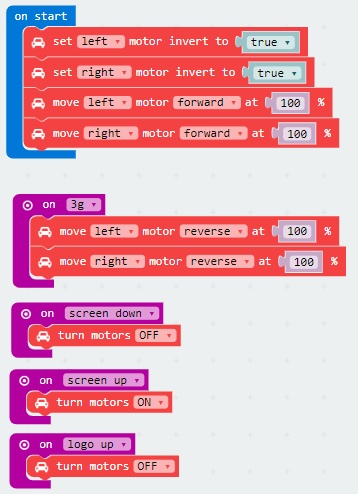 The micro:bit has a built in accelerometer that measures the gravitational forces that are acting upon it. With other microcontrollers this is sometimes hard to use and make sense of the data you receive from the sensor. But, MakeCode has simplified that for you in an event block under the Input drawer (you will see it as On Shake) that allows you to pick a number of different force levels, orientations and even patterns (like shaking it). We use this to detect a number of orientations that you can put your robot in. For example the motors will only be ON in the screen up orientation.

If you tap the robot hard enough it will run / drive away from you. If you flip it over the motors will turn off. Same thing holds true if you place it on its tail with the micro:bit pointing up.

Try playing around with the different events that you can trigger with the accelerometer. Can you get it to detect bumping into an object like the wall and have it respond???

Once your code is loaded to your micro:bit and your motor switch is set to "RUN MOTORS." Your robot should not do anything at first. Give it a good tap / smack on top of the micro:bit. If you apply enough force to it your robot should run away. To stop your robot either flip the robot over to its back the motors should stop, or pick it up and set the robot on end with it sitting on its tail with the micro:bit logo pointing up. To run the program again, return the robot to its wheels right side up and smack it again.

Go Further: You can use the idea of detecting a bump in different ways. Try to write a program that giving your robot a nudge or tap starts it to drive forward for a bit, then you need to nudge it again a bit.