The SparkFun MAX30105 Particle Sensor is a flexible and powerful sensor enabling sensing of distance, heart rate, particle detection, even the blinking of an eye. This tutorial will get you up and running to get the raw data from the sensor. 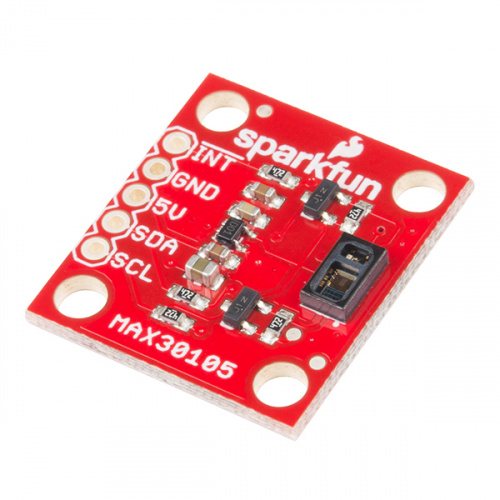 Behind the window on the left, the MAX30105 has three LEDs. On the right is a very sensitive photon detector. The idea is that you obstruct the different LEDs, detecting what light shines back at the detector, and, based on the signature, you can tell the presence of different types of particles or materials (such as oxygenated blood or smoke from a fire). 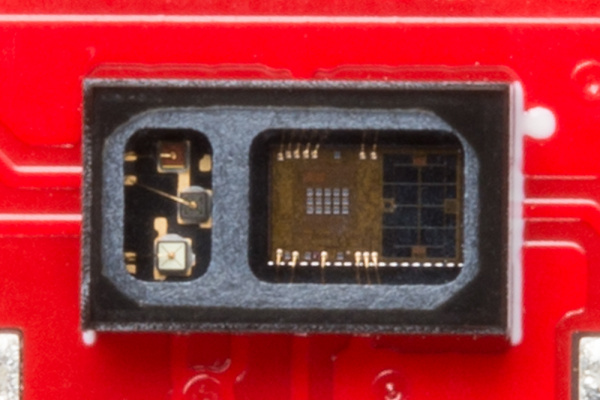 You'll need a handful of extra parts to get the MAX30105 breakout up-and-running. Below are the components used in this tutorial, if you want to follow along.

A microcontroller that supports I2C is required to communicate with the MAX30105 and relay the data to the user. The SparkFun RedBoard or Arduino Uno are popular options for this role, but just about any microcontroller development board should work. (The firmware examples use an Arduino library, if that serves as any extra motivation to use an Arduino.)

127 Retired
Favorited Favorite 79
Wish List
5V Recommended! The MAX30105 can run at 3.3V to 5V and can communicate with 3.3V and 5V microcontrollers. Most USB based development boards have a 5V pin that will power the MAX30105 nicely.

Four or five jumper wires and a breadboard help interface the sensor to your Arduino. To insert the breakout into the breadboard, you'll need to solder headers or cut jumper wires to the pins. (Don't forget a soldering iron and solder!)

The MAX30105 is designed for a handful of uses including Pulse Oximetry. If you're unfamiliar with optical pulse detection there are some very good app notes from TI and NXP that have great starter information.

The MAX30105 communicates over I2C. We’ve got a great library to make it easy to use. And, we’re going to be using a breadboard to connect the breakout board to the RedBoard. If any of these subjects sound foreign to you, consider browsing through that tutorial before continuing.

Welcome to the wonderful world of breadboards. Here we will learn what a breadboard is and how to use one to build your very first circuit.
Favorited Favorite 56

An introduction to I2C, one of the main embedded communications protocols in use today.
Favorited Favorite 100
Share
Use this URL to share: