If you've already programmed Arduino for a while, read on for some additional notes about the LilyPad ProtoSnap Plus. It's very similar to other Arduinos, but has some special features and limitations you'll want to know about.

Below is a list of the LilyPad USB Plus I/O pins and each function.

If you look closely at the ProtoSnap board, you'll notice that sew tab A9 is shared between the switch and an expansion port. Because of this, remember: if you're using the A9 expansion port, ensure that the switch is turned OFF to keep the input or output signal from shorting to ground.

A hard short between power and ground could damage the board. But if you look even closer at the ProtoSnap, you'll see a tiny 1K surface-mount resistor in the ground trace connected to the switch. (On the back of the board you'll see a zig-zag resistor symbol in that spot.) This resistor prevents hard shorts from power to ground if the switch is ON and you connect a voltage source to the expansion port (or output a HIGH signal from A9).

Using a Battery and Battery Charging

SparkFun sells a number of LiPo batteries compatible with this board. If you are new to the LilyPad system, we recommend the E-Textiles Battery. If you're supplying your own battery, use a single-cell (3.7V) LiPo battery with a JST connector.

Batteries with larger capacities (measured as amp-hours or Ah) will run the board longer before needing recharging. How long will depend on how many LEDs your program turns on, etc. If you're just running a few LEDs, you can expect the board to run about 5 hours for every 100mAh of battery capacity.

To recharge an attached battery, plug the board into a USB power source. While the battery is charging, the "CHG" LED will illuminate. When the battery is fully charged the LED will turn off. The default charge current is set to 100mA, so a 100mAh battery will recharge in one hour, a 1000mAh battery in 10 hours, etc. Since the board is set to charge at a rate of 100mA, we do not recommend connecting a lower capacity LiPo battery (i.e. 40mAh LiPo battery) to charge. 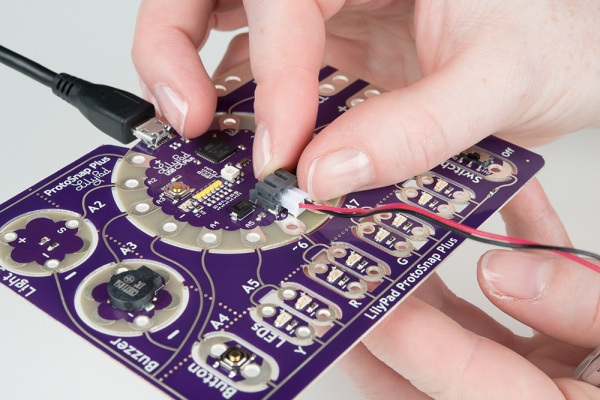 It is safe to leave a LiPo battery attached to the board permanently, even with USB power applied. The battery will not be overcharged.

The battery connector can be tight; to remove a battery never pull on the wires. Use a pair of needle nose pliers or cutters to gently hold pull the plug out of the connector.

Tip: there are two small "nubs" on the top of the plastic battery connector that can be shaved off with a hobby knife to make the battery easier to remove.
Always turn the LilyPad off before inserting or removing a battery. 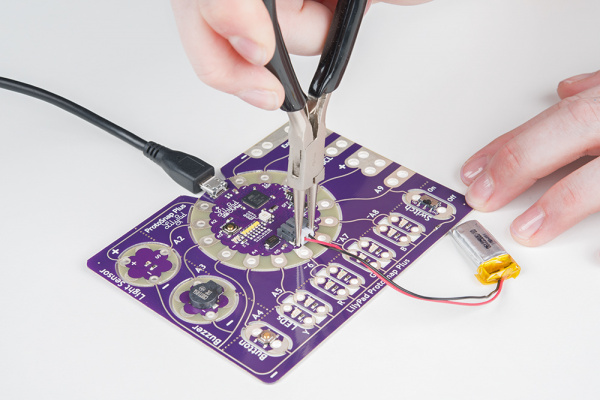