Now that you've explored all the boards on the LilyPad ProtoSnap Plus, it's time to start combining some of those skills into more interactive projects. The first project we'll explore is creating a musical 'instrument' inspired by a theremin. A theremin is an instrument played without needing physical contact, typically utilizing antennas. In this 'theremin', you'll use readings from the light sensor as a controller for frequency of tones produced by the buzzer. We can further categorize this project an opto-theremin because it is using light as a controller. In addition to the sensor and buzzer, we'll display the light readings on the bar graph and add the button as an on/off trigger. 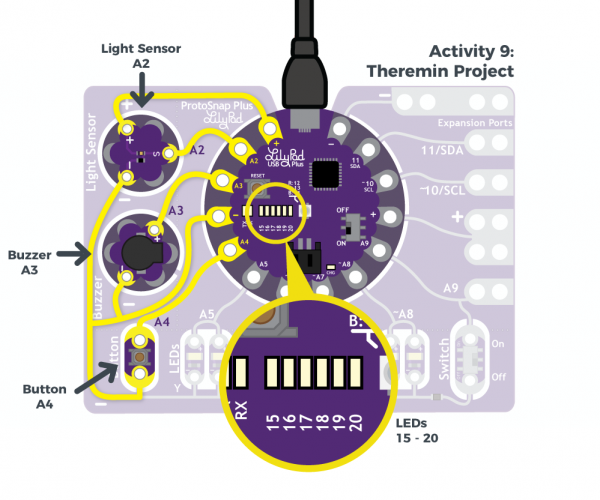 The map() function is a handy function that translates one range of numbers into another range.

This particular example is easy to solve in that you can simply divide the light sensor value by 4, as we did in activity 7. But it would take a bit more work to solve for arbitrary ranges that may not start at 0, as we'll be doing in this activity.

The map() function does this for you. The parameters it needs are:

For example, here's how we'd set up map() for our earlier example:

It's worth mentioning that if value isn't within the original range, map() will still work; but it will return a result outside the target range. If your result must be within the target range, an additional function called constrain() can be used to ensure that:

If value is already within the range of low to high, the result will be the same as value. But if value is outside that range, it will be set to low or high, whichever is closest. Our complete example would then look like:

To play the theremin, press and hold the button with one hand and cover the light sensor with the other. As the light sensor reads different light levels, the frequency on the buzzer will change and the bar graph LEDs will illuminate to show the different tones. Release the button to stop the sounds. You can also use a flashlight to shine more light on the sensor and get a large range of tones.