In this activity, you’ll run your first program on the LilyPad USB Plus at the center of the LilyPad ProtoSnap Plus. It will “just” make an LED blink, but there’s a lot going on even in this simple task. Let's get started! 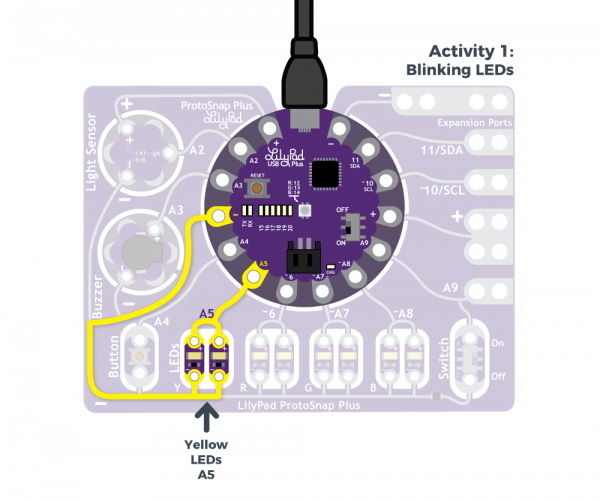 What is an LED?

“LED” stands for “Light Emitting Diode”. These are electronic components that light up when electricity passes through them. They come in a variety of colors; your ProtoSnap board includes yellow, red, green, and blue ones, and the LilyPad USB Plus has a built-in bargraph of white LEDs and a special "red-green-blue" (RGB) LED that can display a rainbow of colors.

We've provided a pre-written example program that we'll load into the Arduino IDE.

We'll walk you through the example program, explain how it's constructed, and go over the two basic functions every program needs; setup() and loop().

We'll show you how to light up and blink LEDs using the pinMode(), digitalWrite(), and delay() commands.

A great way to learn to program is to make small changes to a program that someone else has written, and see what happens. We'll suggest places to try this, and give you a few challenges at the end of each activity.

For each of these activities, we'll start with a pre-written program that you'll explore and modify. To load the first program, start up the Arduino IDE and go to: 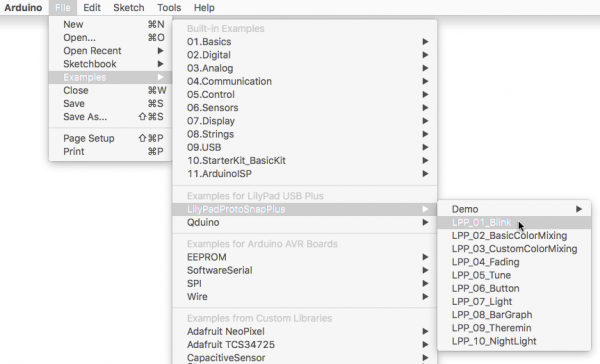 Your menu of options may look different depending on what boards you have installed in Arduino.
You may have to scroll down to see the LilyPad ProtoSnap Plus examples option.
If you don't see the examples as shown, check that you have SparkFun AVR Boards version 1.1.8 or above installed in the Boards Manager. See Setting Up Arduino section of the LilyPad ProtoSnap Plus Hookup Guide for more information.

You can also copy and paste the following code into the Arduino IDE (be sure to delete any code already in the window first).

Once you've connected your LilyPad ProtoSnap Plus to your computer as shown in the Before You Begin section, and loaded or copied the example program into the Arduino IDE, click the upload button (the round button with the right arrow at the top of the window) and see what happens!

Once the code has uploaded, the pair of yellow LEDs on the ProtoSnap Plus will blink once per second.

Why do two LEDs light up when I am only setting one pin to blink?

In the LilyPad ProtoSnap Plus, the LEDs are connected to the sew tabs in pairs; This is known as a parallel circuit. If you turn on one of the sew tabs, you'll turn on both LEDs as they share the same power source. This allows you to have the option of more LEDs attached to your project without needing additional sew tabs.

In this section, we'll explain what this program does. For this first activity we'll be pretty thorough. As we progress through future activities, we’ll just highlight new concepts as we introduce them.

At the top of the program, you'll find text describing what the program does, who wrote it, etc. These are called comments. They are there solely for your information and are ignored by the microcontroller. Comments in the Arduino IDE will show up as gray text. 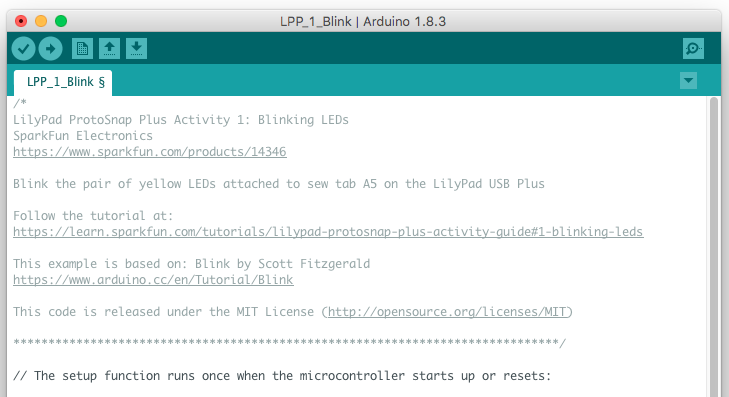 We use special symbols to tell the microcontroller to ignore comments.

Adding comments to your program is a very good habit to get into! It will help you immensely when you return to your program later and want to understand what you were trying to do. They are also a great tool to add notes for someone who may be using or sharing your code.

The next section of our program contains a function. A function is a named block of code that does a defined task or set of tasks. When a function is run, all of the code contained between the curly brackets { and } is run. Arduino has two essential functions that are required for every program to run properly: they are setup() and loop(). Arduino programs can use many functions (both built-in and user defined), but they must at least have those two. These and other control structure functions built into the Arduino software will display in green text. Let's explore the setup function.

Inside functions, we put statements. A statement is a single instruction to the microcontroller. Statements always end with semicolons ;. It's a common error to forget the semicolon, so if you get an error when uploading your code, double-check that every statement ends with ;.

Most statements will include commands. Commands are specific functions you can use to complete common tasks in Arduino. There are many built-in commands that can be used for all sorts of things - input and output, math, decision making, etc. These commands display in orange text. We'll cover many useful commands in this guide.

In this program, we’ve put one command in the startup function, called pinMode(). Note the unusual capitalization, called "camel case". Commands are case-sensitive, so pay special attention to this.

The pinMode() command, as you may have guessed, sets the mode of a pin. Pins are the metal legs on microcontroller chips that are attached to the sew tabs on your LilyPad board. Pins can be configured as inputs or outputs. In this program, we’re going to use pin A5 to control an LED, which is a component sending information (light) to the world, so we'll make it an OUTPUT.

Commands take various numbers of parameters, which are the information the command needs from you. Parameters go inside parentheses () after a command, and are separated by commas if there are multiple. The pinMode command takes two parameters; the number of the pin, and whether you want it to be an INPUT or an OUTPUT. Here, we're setting pin A5 to be an OUTPUT.

You may have noticed some parameters are shown in blue text and others plain black. Colored text indicates one of Arduino's reserved words. A reserved word can be a variable, function, or command that has a specified use in the Arduino software. If you are typing something in your code and it displays in colored text, it has a pre-set meaning for Arduino. We'll learn more about variable naming in the next activity. For a full list of reserved words, visit the Arduino Reference website.

The second essential function needed to run an Arduino program is called loop(). After the setup() function runs once, the loop() function runs over and over, forever (or until you turn off or reset the microcontroller).

A loop() function usually contains the main tasks and behaviors of your program; the things you want it to do repeatedly. You can use this to your advantage; for example, in this program we want to blink an LED continuously. Because the loop() function repeats, we only need to write the code to blink it once, and the loop() function will make it blink over and over.

The first thing we'll do is turn our LED on. To do that, we'll use the digitalWrite() command.

Because the microcontroller runs so fast, if we immediately turned the LED off, you'd never notice it. So we'll slow things down with a command called delay() that does nothing but pause the program for a set amount of time.

The delay() function takes one parameter, the number of milliseconds to wait. There are 1000 milliseconds in one second, so here we're pausing for one second. If you make this value smaller, the LED will blink faster, and vice-versa. Try it!

Finally, we'll add a second delay(). This one pauses while the LED is off, finishing the complete on-off "blink" cycle. If we didn't have the second delay(), the LED would immediately turn on again when loop() starts over. This happens so quickly you wouldn't notice it being off.