In the activities thus far, you have been using outputs - components that receive a signal or power from the LilyPad USB Plus and send information (light and sound) to the world. In the next few activities, we will start to receive input from the world using buttons and sensors to affect the LilyPad boards on the ProtoSnap Plus. 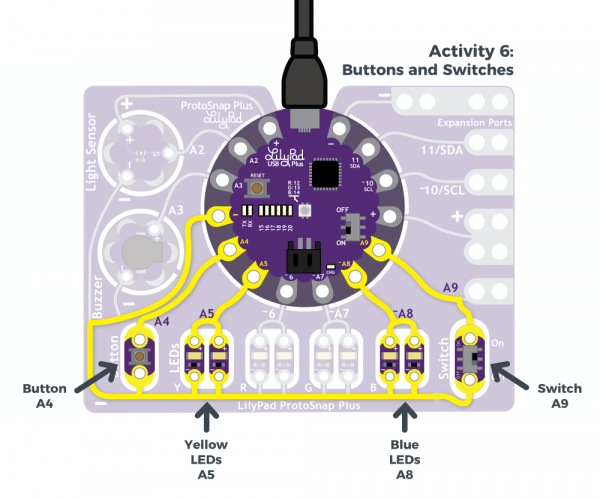 What is a Switch?

A switch is type of component that controls current flow in a circuit. The LilyPad Slide Switch is an example of a maintained switch, meaning its state remains the same until changed. The board has a small switch labeled ON/OFF; when the toggle is moved to the ON position, the two sew tabs on the switch are connected, allowing current to flow through and close the circuit. When moved to OFF, parts inside the switch move away from each other and open the circuit (disconnecting it).


What is a Button?

The LilyPad Button Board is a special type of switch called a momentary switch - it is only active when an action is applied. When you press the button in the middle of the board, it connects the two sew tabs and allows current to flow through. When you let go of the button, the connection is opened again, and the button springs back into place.

Learn more about how buttons and switches work and the different types you can use in Switch Basics.

Just as digital outputs have two states, ON or OFF (HIGH or LOW in code), digital inputs also have two states. We'll use a special function called digitalRead() to check if the button has been pressed or if the switch has been flipped when attached to a sew tab on the LilyPad USB Plus.

In Fading LEDs, the for() loop set a variable that was changed during the program. In this activity, you'll read the state of a button or switch to a variable to hold its state for later use in your program.

In the Fading LEDs example, we explored a specialized function, the for() loop. In this activity, we'll use another function called an If Statement that will check if a state is true or false. Then we will make decisions based on the reading it receives. If/else functions are a way to start adding behavior based on input in your code, whereas the for() loop example created some automation. As you learn more specialized functions in Arduino (or write your own), your programs will become more complex and able to execute more complicated commands and interactions.