The LilyPad USB Plus includes six white LEDs. You can control them individually like any of the other LEDs on the ProtoSnap, but because they're in a row they're perfect for creating a LED bar graphs. In this activity, we'll experiment with graphing the readings from the light sensor onto the row of white LEDs on the LilyPad USB Plus. 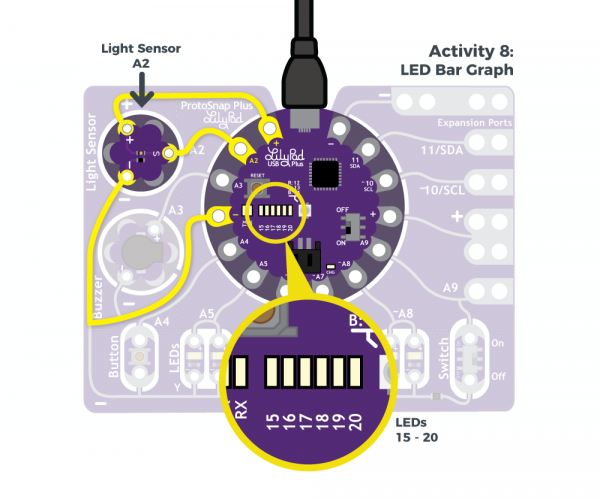 What is an LED Bar Graph?

An LED bar graph is a row of LEDs that you can use to display information by lighting up one or more of the LEDs. The LilyPad USB Plus has a row of LEDs you can use as a bar graph to the left of the RGB LED. Like the RGB LED, these white LEDs are not connected to a sew tab, so the pin numbers that they are connected to (15-20) are written below them for easy reference. LED bar graphs have less resolution than other types of displays, but this can be an advantage if you just need a quick indication if a value is high or low.

Arrays are a handy way to store many variables in one structure. Here we'll store the pin / sew tab numbers of the white LEDs, making them easier to use as a group.

So far we've been using Arduino's built-in functions, but you can also create your own. Functions are great for bits of code you want to run repeatedly, or even reuse in other programs.

Anatomy of a Function

So far we've been using Arduino's built-in functions to do everything, but you can write your own functions as well. Functions are a great way to encapsulate a bit of code that you use a lot, or want to re-use in other programs.

You've already seen the basic structure of the setup() and loop() functions. Your own functions will have the same structure. Let's go over the individual pieces:

You've probably noticed the word void at the start of the setup() and loop() functions, and wondered what that means.

Functions can optionally return values, and the return type lets you specify what type of data it will be returning. Some functions, like setup() and loop() just carry out that task. Since they don't return a value, their return type is void.

Other functions, like digitalRead() and analogRead() return a value. These functions have int as their return type.

If you want to write a function that returns a value, specify the return type (usually int) before the name, and include a return statement at the end of the function. Here's an example of a very simple function that always returns 4 when called:

Every function needs a name. It should be unique; not the name of an existing function or variable (you can tell this if the name changes color when you type it in). Ideally the name should be descriptive of what the function does, though of course it's your program and you can name things whatever you wish.

You've seen that many functions require parameters. For example, pinMode() requires a pin number, and whether that pin should be configured as an INPUT or OUTPUT.

If your custom function needs parameters, you can declare them in the parentheses after the function name. These are declared just like variables in our code; with a type (usually int) and a name. If you need more than one parameter, separate the declarations with commas. Here's an example of a simple function that adds two numbers together and returns the result:

Note that when you call a function with parameters, the values are transferred to the function by position, not by name. Let's say you're calling your add functions from the main loop:

Now's a good time to bring up the concept of scope, which governs where variables are visible in your program (spoiler: it depends on where you declare them.)

In all of our activities, we've declared several variables at the very top of the program. Because they are declared "outside" of setup() and loop(), they've visible within those functions (and any others you create). Because these variables are visible everywhere, they're called global variables.

We can also declare variables inside functions, as we did in the add() function above. This variable will be usable within the function, but if you try to access it elsewhere, you will get an error ("variable not declared in this scope"). These are called local variables.

Both types of variables have their place. Global variables are useful for pin names and option settings, since they're visible everywhere and easy to change from one place. Local variables are ideal for data that doesn't need to leave a function; they allow you to copy and paste functions to new programs.

Learn more about functions and their use at the Arduino Reference site.

Many times in programming you'll want to add or subtract one from a number, such as in a for() loop. In earlier activities, we did this with the pattern x = x + 1. But there are some handy shortcuts you can use:

Learn more about compound operators for shorcuts and their use at the Arduino Reference site.

After the code loads, the white LED bar graph on the LilyPad USB Plus will show you how much light is hitting the light sensor. Try covering the sensor with your hand, or aiming a flashlight at it to see a larger or smaller response from the bar graph.