7: If This Then That

Fading from the last experiment was working just fine until we got to the maximum brightness level of 255. What happens then is a mystery known only to the compiler (and you, once you learn a little something about data types). What if we added "catch" to force that fade variable to reset when it hits a certain value?

This experiment introduces the if statement, one of the most fundamental programming structures. Not only are if statements important for computers, they also rule most of the decisions we make in our lives: If it's cloudy outside, then pack your umbrella. If you're hungry, then make a sandwich. Like us, computers use if statements to make choices.

An if statement requires two components to be complete: a condition and a consequence. A condition is a value or mathematical operation that evaluates to either true or false. If the condition evaluates to true, then the consequence is executed. The consequence can be a code block of any size - one block or hundreds of blocks.

If the condition in the if statement is false, then the consequence is skipped, and the program starts running the code following the if block. 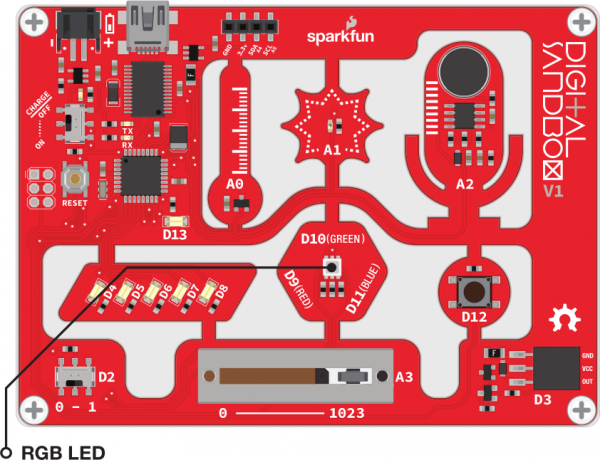 Here are the blocks required to limit the fade value of our LED. 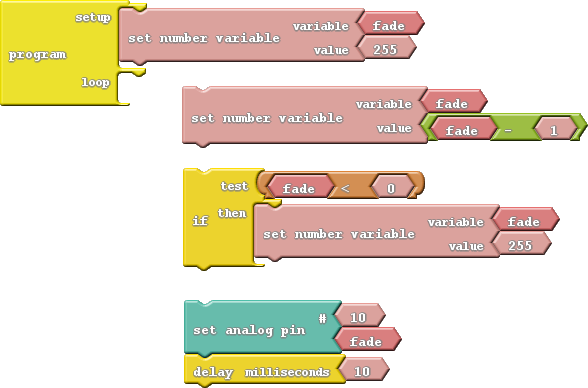 There are two new blocks to mention here:

In this sketch, we want the blue LED to progressively go from super bright to off, and repeat that cycle endlessly. We'll use a variable called fade to keep track of the analog output value. At the very beginning of each loop, we'll subtract 1 from the fade variable.

Then, after subtracting from fade, we need to use an if statement to make sure it's not out of bounds. The if statement in this sketch states that if fade is less than 0 (that would mean it's a negative number), then set fade to 255.

Finally, once we've generated our fade value, we can set pin 10 (or pick another LED if you please) to that analog output value.