Now, we didn't exactly cheat in experiment zero, but the Blink block was a bit of a shortcut. What if you wanted to speed up the blinking? Or change how long it's on versus how long it's off? Or even blink something other than that wimpy little yellow LED?

This experiment digs into the anatomy of the Blink block. We can customize an LED blink with a combination of two blocks -- Set Digital Pin and Delay Milliseconds.

This experiment introduces the concept of digital output. We call the Sandbox's LEDs "outputs," because it's an effect that the board produces.

The term "digital" means that the output can only take one of two states: ON or OFF. We may also refer to those two opposing states as HIGH/LOW or 1/0. When an output connected to an LED is HIGH, the LED turns on. When the output is LOW, the LED turns off. 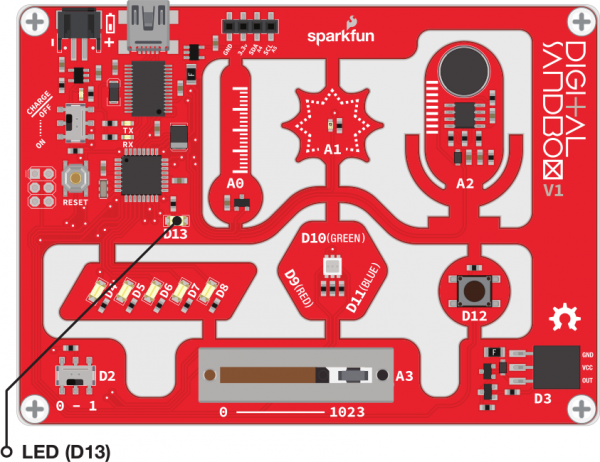 Here is the set of blocks we'll use to create this drawing: 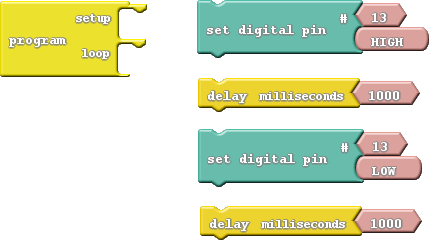 Aside from the Program block (which you should include in every drawing), there are two new blocks to be added:

Organize and snap together the Set Digital Pin and Delay Milliseconds blocks so they alternate -- teal, yellow, teal, yellow. Then put the group of four blocks in the loop section of the Program block. Then Upload the code.

You should see a very familiar sight. But this time you have control over the blink rate! Adjust the value in the Delay Milliseconds block(s). What happens if you make the delays shorter? What happens if the two delays are not for the same amount of time?

The Digital Sandbox operates at 8MHz -- there's a clock in there that ticks eight million times per second. That means it can run millions of lines of code per second. Without any delays in the program, the digital output would flick on and off so fast you wouldn't be able to tell if it's actually on or off.