Manual PWM is hard, and it doesn't leave room for anything else in the program. Why can't we offload that chore to the Digital Sandbox's microcontroller? It's smart enough for that...right?

PWM is such a popular tool many microcontrollers implement special hardware so they can mindlessly toggle the pin while doing something else. We call this PWM-based output analog output.

Unlike digital outputs, which only have two possible values, analog outputs have a huge range of possible values. On the Sandbox we can analog-ly output 256 different values. If we set an analog output to zero, that's like setting a pin LOW, and 255 is like setting a pin HIGH, but all of the values in between produce an output that's neither HIGH or LOW -- it's somewhere in between.

Analog output seems great -- why wouldn't you use it all the time? Unfortunately, not all pins have special PWM powers. Only pins 3, 5, 6, 9, 10 and 11 are able to produce analog outputs. 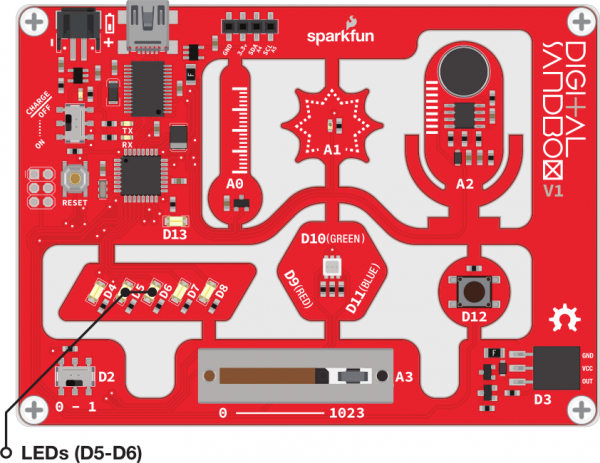 New block alert! While it may look similar, we'll be using Set Analog Pin this time instead of its digital counterpart:

Stack the blocks in the loop section. Order them so the analog values go from zero at the top to 255 at the bottom. Then upload away!

The LED on pin 5 should cycle through five different levels of brightness (including fully on and fully off). Remember that setting the analog output to zero turns the LED off, and 255 is like setting it to HIGH.

Try adding analog control of the pin 6 LED to the drawing. You can create the same effect from the last experiment, with just two lines of code (and you can execute other code while the LEDs remain in their dimmed state!).