What would make the AST-CAN485 even better? WiFi! In order to further the communications capabilities of the CAN485, we present the AST-CAN485 Wifi Shield. The shield is based on the Sparkfun ESP8266 thing and allows for a CAN485 module to communicate over Wifi. 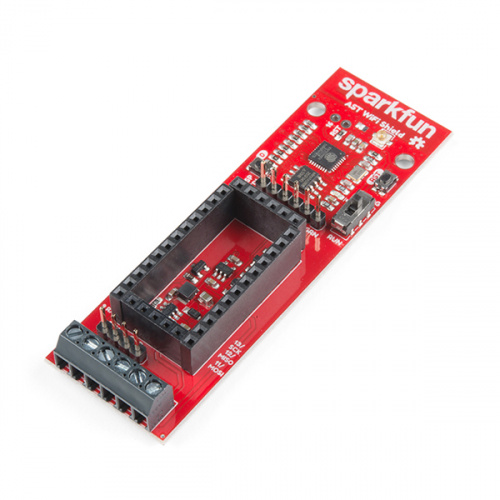 The AST-CAN485 WiFi Shield provides a way for working wirelessly in automation, an environment famous for being noisy and unf…

Depending on your setup, you will need a soldering iron, solder, and general soldering accessories to solder pins to the AST-CAN485. You will also need a flat head and wire strippers to connect wires to the screw terminals.

What should every hacker have available to them? That's right, a screwdriver (you have to get into those cases somehow). What…

We recommend checking out the AST-CAN485 Hookup Guide to get started with the board. Depending on your setup, you may need to install custom libraries and board add-ons.

If you aren’t familiar with the following concepts, we also recommend checking out these tutorials before continuing.

How to strip, crimp, and work with wire.
Favorited Favorite 48

Quick tips regarding how to connect, protect, and disconnect U.FL connectors.
Favorited Favorite 14

The AST-CAN485 WiFi Shield provides screw terminals for your power, RS-485 signals, and CAN bus signals, presoldered to the board for fast and secure connections.

Based on the SparkFun ESP8266 Thing, you can use either the PCB trace antenna, or the U.FL connector if housed in a metal enclosure. 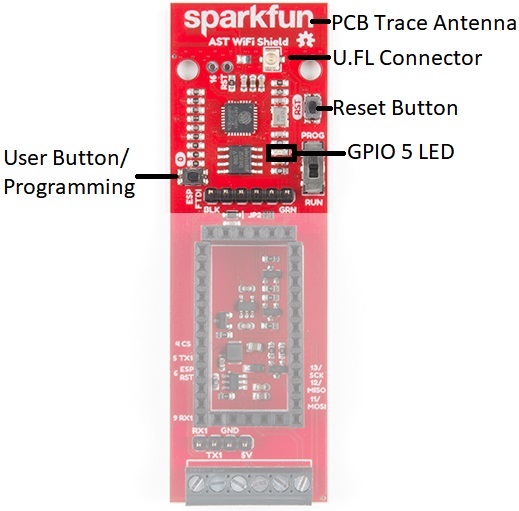 Because the UARTs are connected together for the CAN485 board and the ESP8266, a switch is used to separate the RX and TX signals. When programing either the ESP8266 or CAN485 board, move the switch over to the PROG position, and after the upload is complete, toggle the switch to the RUN position.

A header breaks out the Software Serial port used by the CAN485. This can be used as a debugging serial port or to connect other devices.

The pinout for the WiFi Shield is shown below: 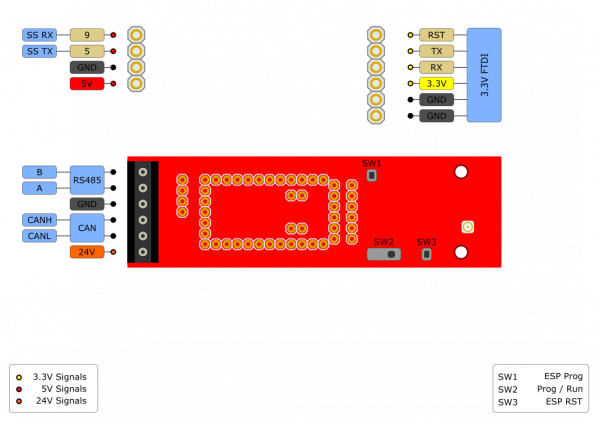 The schematic below shows the layout of the interconnects between an inserted CAN485 module and the integrated ESP module. 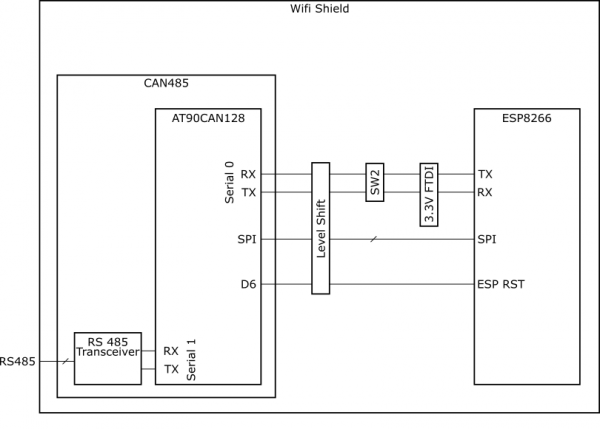 The primary interface between the CAN485 and the ESP8266 is a serial port. It operates on hardware serial port 0 on the CAN485 rather than the traditional Software Serial port. The reason for this is that it enables higher speed communications between the two devices. The trade-off of this feature is that it uses the main serial port, which is also used to program the CAN485 and is broken out on its FTDI header. This means that in order to program the CAN485 module, while it is inserted, the serial port must be disconnected. For this reason, the mode selection switch was added which allows for the rx and tx lines to be disconnected. In a similar way, the same serial port is used to both program the ESP8266 and communicate with the CAN485. The mode selection switch also enables the ESP to be programmed by disconnecting it from the CAN485.

The AST-CAN485 WiFi Shield comes with headers pre-soldered to the board. Insert the CAN485 as shown with the CAN485's FTDI header close to the ESP8266. 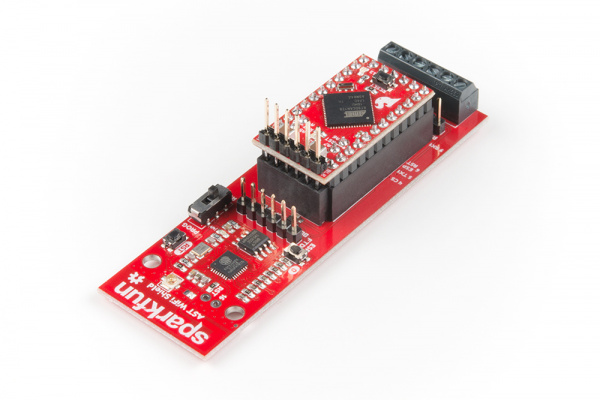 The Shield can be powered through the screw terminals. While the power input is intended to be supplied with 24V, an input voltage of 7-24V may be used.

An integrated power supply regulates the 24V input power down to 5V which is used to provide power to the inserted CAN485 board. This is further regulated down to 3.3V to power the ESP module.

It is also possible to power the board using the raw input pin of the CAN485 module. However, use of an external 24V supply is recommended and is the intended use case.

Note: This example assumes you are using the latest version of the Arduino IDE on your desktop. If this is your first time using Arduino, please review our tutorial on installing the Arduino IDE. If you have not previously installed an Arduino library or board add-on, please check out our library installation guide and instructions to install the AST-CAN485 board add-on files. 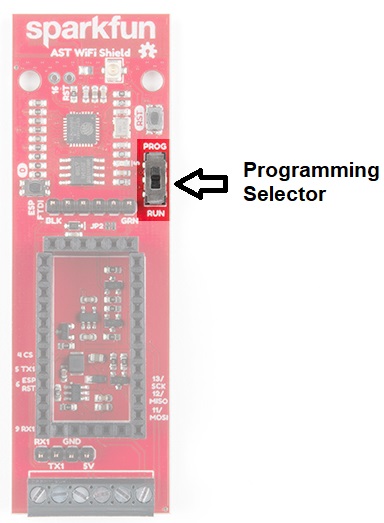 There are many options for programming ESP8266 based devices. The approach recommended by this guide is to make use of the ESP8266 Arduino Addon which has been developed by the ESP community. The Addon can be downloaded via the GitHub Repository or by clicking the button below.

The following process is followed in order to program the ESP module:

The following process is followed in order to program the CAN485 module:

The WiFi Shield GitHub Repository includes a few examples which demonstrate the use of the board. After downloading the repository, open up one the examples in the Arduino IDE. Select the CAN485 as the board, the COM port that it enumerated on, and hit upload to test.

This example demonstrates serial communication between and inserted CAN485 and the on board ESP8266. Each device has a built in LED which is controlled by the other device over the serial port. Operation is as follows:

In addition to the examples in the WiFi Shield GitHub Repository, there are a number of examples using the ESP8266 in the ESP Arduino Library. These are accessible in the Arduino IDE under File>Examples. Examples may also be found in the ESP Github Community Forum.

How to start working with the OBD-II Uart board.
Favorited Favorite 7

A basic introduction to working with the CAN-Bus shield.
Favorited Favorite 11

A general guide to the OBD-II protocols used for communication in automotive and industrial applications.
Favorited Favorite 27

Or dig in further with According to Pete for more information about RS485.

According to Pete: How RS-485 Works