Experiment 1: Sending and Receiving a Signal

There are a few methods of transmitting data between two or more micro:bits. You can send a number, or a string. For simplicity, we will send one number between two micro:bits.

For this part of the experiment, we are going to send a number from one micro:bit to another micro:bit on the same channel.

Connect the first micro:bit to your computer via USB cable.

Heads up! If you have more than two micro:bits, make sure to adjust the channel for each pair of micro:bits. If one pair is transmitting/receiving, another pair can pick up the same signal causing great confusion!

When the micro:bit is powered up, we'll want it set up the radio to a certain channel. In this case, we head to the Radio blocks, grab the radio set group __ block, and set it to 1. We will use the built-in button A on the micro:bit. From the Input blocks, we use the on button A pressed, Once the button is pressed, we will transmit a number 0 wirelessly. For feedback, we will use the Basic blocks to have the LEDs animate with a dot expanding out into a square to represent a signal being sent out. Once the animation is finished, we will clear the screen.

For this part of the experiment, we are going to have a second micro:bit receive a number from the first micro:bit.

Download the following example script and move the *.hex file to your micro:bit. Or use it as an example to build it from scratch in MakeCode. You will need to open a new project to receive the data from the first part of this experiment. 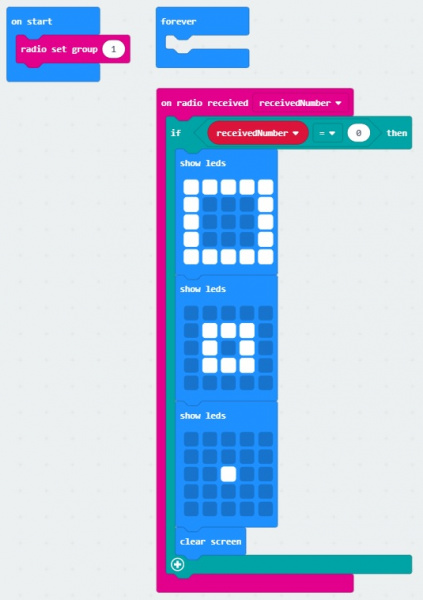 Pressing on button A with the first micro:bit (our transmitting) will send a number out in channel 1. In this case, the number that is transmitted is 0.

The second micro:bit (our receiving) will take that number that was sent on channel 1 and do something based on the condition statement. In this case, there is an animation using the LED array to indicate when we have received the number.