The simplest form of input is a button press, so we'll control LEDs remotely using buttons for this project as shown in the diagram below. 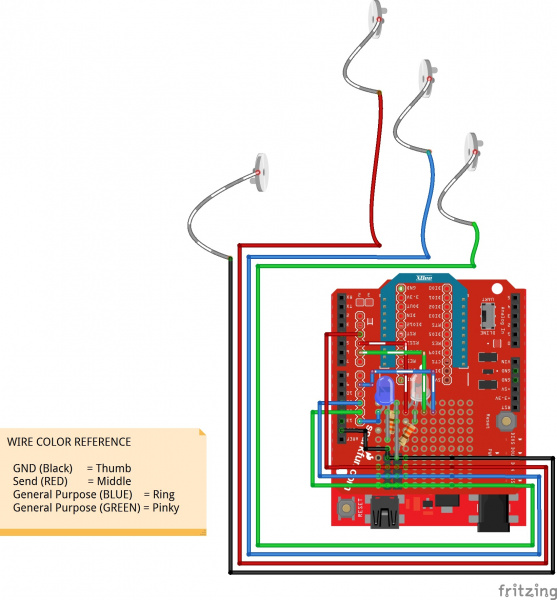 Since the electronics are going on a glove, the usual momentary button won't be the most comfortable on the fingers. Instead, we'll make our own custom button using snappable pins, conductive thread, and wire. You'll need to make a contact between your thumb, middle, ring, and pinky to GND, pin 4, pin 11, and pin 12, respectively.

Note: Connecting all four snappable pins is entirely optional if you are looking to control something with more than one mode. Depending on your project, you may just need two snappable pins for a button press. The conductive thread shown in the grey/white "wire" is also optional. If you are moving around with the glove (i.e. dancing with your hands on the floor), I've found that conductive thread was the best at preventing damage between the snappable pin that is attached to the fingers as opposed to soldering wire directly.

For feedback to indicate that we have sent a character wirelessly, we'll solder an LED and 330Ω current limiting resistor to the protoboard between pin 13 and ground. You could use the on-board LED on the RedBoard but it would be harder to see under the shield. Additionally, we'll attach a diffused, common cathode RGB LED to pins 5, 6, and 9. Make sure to add a second 330Ω current limiting resistor between the common cathode and GND, respectively.

Note: The RGB LED is also optional. However, I've found that it is a useful indicator when controlling a robot remotely or controlling EL Wire with a pattern using the EL Sequencer. Additionally, each color in the RGB LED has a different specification. To balance the colors, you may want to use different resistors so that red is not saturating the other two colors when color mixing.

For the receiving XBee, we'll just mimic the LEDs used for feedback on the glove. The circuit is the same, that is without the custom buttons as shown in the diagram below. The board is flipped over to illustrate the receiving XBee node. 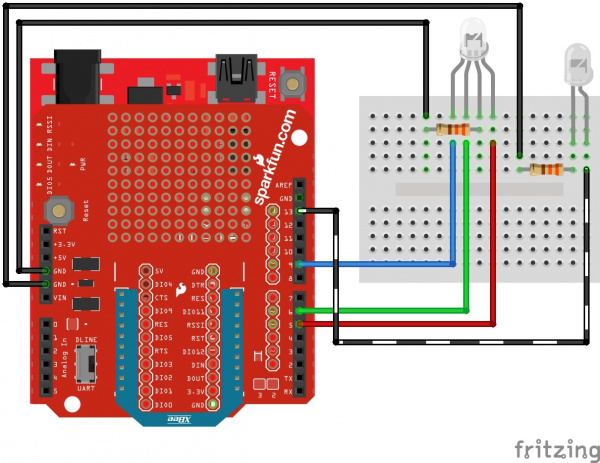